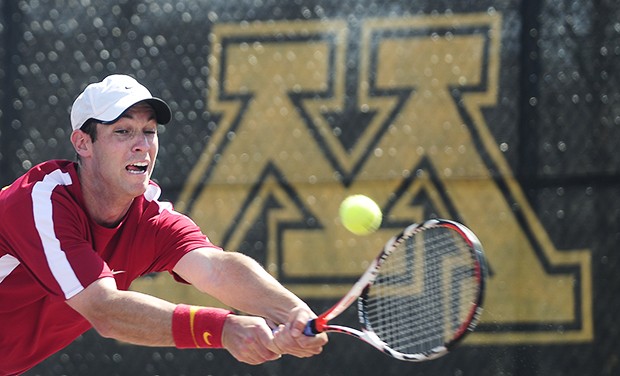 The Minnesota menâÄôs tennis team swept not one but two opponents this weekend. The Gophers (18-6 overall, 7-3 Big Ten ) swept Iowa (12-8, 4-6 ) on Friday and Purdue (7-15, 1-9 ) on Saturday, both by a score of 7-0. This is the first time Minnesota has swept consecutive Big Ten teams since 2004 . MinnesotaâÄôs sweep of Iowa was its first sweep of a Big Ten opponent in nearly three years since blanking Purdue on April 23, 2006. Minnesota started the match off positive when they took two of the three doubles matches. Junior Dino Bilankov needed an hour to win his matc h and first-year Ishay Hadash clinched the match with his 6-1, 6-3 win . The Gophers ended the match with three straight-set singles wins from first-year Julian Dehn and sophomores Sebastian Gallego and Tobias Wernet. Even though Minnesota went 12-0 in singles matches during the weekend, menâÄôs coach Geoff Young said the Gophers might have lost focus on the match at times. âÄúI felt like we had lapses of concentration and the result was usually losing the set,âÄù Young said. âÄúI attribute to that a little bit to wanting to move on to the tournament.âÄù Against Purdue, the Gophers saw Hadash, Gallego and Bilankov win both their doubles and singles matches . First-year Phillip Arndt completed the sweep with his No. 5 singles win . With 18 wins, Minnesota earned its most wins since the 2003 season and clinched the No. 3 seed for next weekâÄôs Big Ten tournament in Ann Arbor, Mich. âÄúItâÄôs a tough league to finish top three in,âÄù Young said. âÄúWe felt like we let one match get away from us that we should have won but IâÄôm sure that 10 of the 11 teams felt that way.âÄù WomenâÄôs Tennis The Minnesota womenâÄôs tennis team also won back-to-back matches. Minnesota (11-11overall, 3-7 Big Ten ) beat Indiana State (8-11, 6-2 Missouri Valley State ) on Saturday 5-2 and Purdue (8-12, 4-6 Big Ten ) on Sunday 4-3. The wins snapped a five-match losing streak for the Gophers. The Gophers started their match against Indiana State with a 2-0 advantage due to forfeits . The Sycamores had four players and were forced to default two singles matches and the decisive doubles match. This is a change for the Gophers who are used to having to forfeit. WomenâÄôs coach Tyler Thomson s aid it was refreshing to have a full roster. âÄúIt was a little bit strange to be ahead before the match even starts,âÄù he said. âÄúItâÄôs kind of a double edged sword because you have to be careful that you donâÄôt take things for granted.âÄù With their regular line-up at full strength, Minnesota won the match 5-2 . Sophomore Alessandra Ferrazzi and senior Karina Chiarell i clinched the doubles point with an 8-6 win. The Gophers were able to get the team victory when first-year Magdalena Wiecha won her match. On Saturday, Minnesota swept the doubles competition . Wiecha and senior Alex Seaton posted an 8-4 victory, junior Tijana Koprivica and junior Jackie Sperling won 8-5, and Chiarelli and Ferrazzi won 8-4. The win kept Minnesota tied for seventh with Wisconsin in the Big Ten standings. Since the Gophers lost to the Badgers last week, Minnesota will be the eighth seed for next weekâÄôs Big Ten tournament for the second straight year.