Both candidates believe their backgrounds will help them win the West Bank city council seat on Nov. 7. 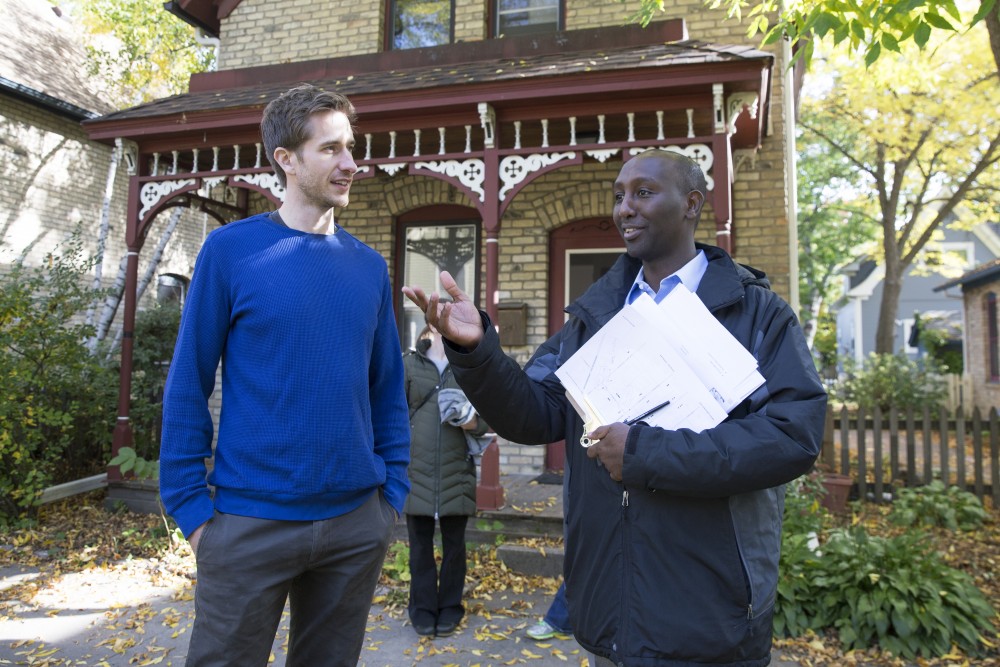 Ward 6 City Council candidate Mohamud Noor knocks on doors, speaking with Garrett Peterson outside his home on Saturday, Oct. 14 in Minneapolis. Peterson plans to vote for Noor in the upcoming election.

Warsame spoke to a supporter at her home on East 29th Street on Thursday to affirm that he had her vote. On Saturday, Noor discussed police reform with an undecided voter at a Milwaukee Avenue Historic District residence.

Both candidates have been navigating the Ward 6 neighborhoods — Cedar Riverside, Seward and Elliot Park — on a daily basis in anticipation of the Nov. 7 election. Warsame believes his experience will propel him to a second term in office, while Noor says he would play a more active role in the community as council member.

Each candidate believes that his progressive background will help him best address issues in the ward. Warsame also cited his advocacy for environmental issues while on the council; he co-authored the plastic bag ban ordinance that was ultimately pre-empted by the Legislature before taking effect.

“A lot of people rest their claim on rhetoric and hyperbole, but [Warsame] understands the role of city government and understands how to help people,” Frey said.

Income inequality is a focus for both city council candidates. About 18 percent of residents in Cedar-Riverside are unemployed, compared to the statewide rate of roughly 4 percent. Warsame said his work with the Cedar Riverside Opportunity Center shows his commitment to addressing the ward’s employment issues. “Opening the Opportunity Center in Cedar-Riverside and addressing the issue of unemployment [and] underemployment is something I’m proud of,” he said.

Noor describes himself as the “most progressive” candidate in the Ward 6 race.

Neighborhood listening sessions would be something he would prioritize as city council member, he said, as community engagement is something he feels is lacking under Warsame. “My opponent has not done the work of connecting, listening, representing, but you need to have that mindset,” Noor said. “I’ve been a public servant for 18 years. I’ve been in the trenches helping people who need it the most.”

This isn’t Noor’s first run for elected office — he ran for a Minneapolis School Board position in 2013, and for the State House District 60B seat in both 2014 and 2016.

Noor’s opponent in the 2016 District 60B race, Rep. Ilhan Omar, DFL-Minneapolis, endorsed his bid for the Ward 6 seat on Oct 4th. Omar said she chose to back Noor because of his progressive track record.

Noor said he wants to engage more youth at City Hall, including the implementation of a youth office.

“How do we help [youth]? How do we engage them? It seems people are forgetting this is about the entire city, and the youths are often left out of that conversation,” Noor said.

Ward 6 is home to a large population of East African immigrants. Both Noor and Warsame said constituents have expressed concern over President Donald Trump’s travel ban and stance on immigration.

Noor hopes establishing a municipal ID for Minneapolis residents will help undocumented immigrants feel safer in the community. “Especially in the era of Trump, we want to protect them at the same time giving them the documents so they can even just attend their kid’s school,” he said.

Amano Dube, director of the Brian Coyle Center — which offers programming that promotes social and economic equality in the Cedar-Riverside neighborhood — said he hopes whoever is elected to the Ward 6 seat will address affordable housing, police accountability and education rather than politics.

“These are the real issues on the ground,” he said.