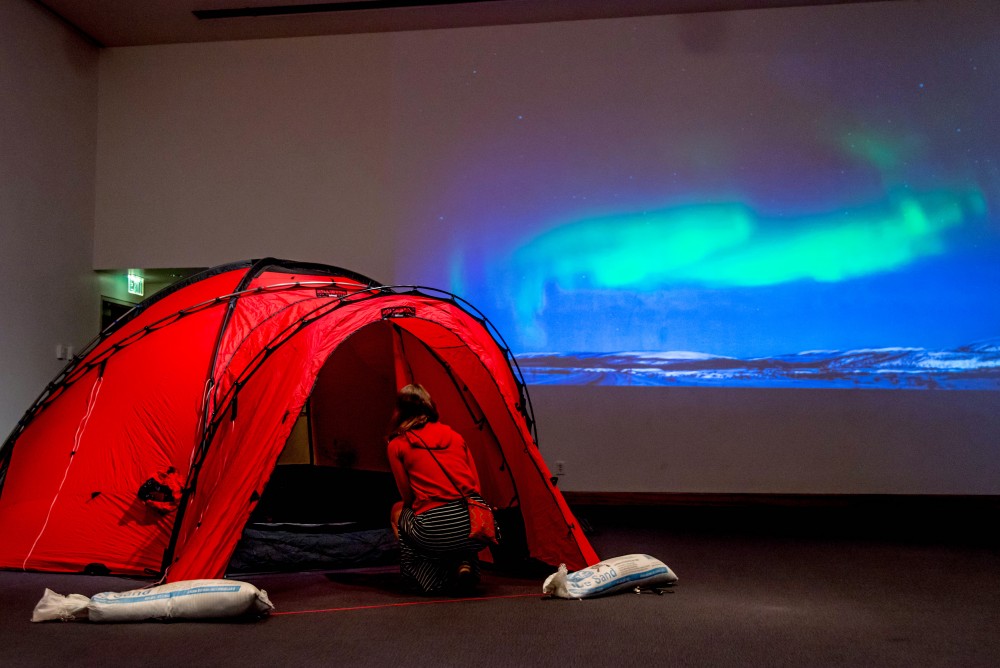 A tent and other supplies used by UMN professor Dr. Aaron Doering and his team to cross the Arctic were on display as part of the Vanishing Ice preview party at the Weisman Art Museum on Friday, Jan. 26.

Never has there been such a duo as science and art. The two compliment each other, delivering strong and effective messages backed up by facts and overflowing with emotion. “Vanishing Ice,” the Weisman Art Museum’s spring exhibition, brings awareness to the rapid decline of Earth’s icy regions.

“Vanishing Ice” is a traveling exhibition that focuses on three regions: Alpine, Arctic and Antarctic. The selected photos, paintings, installations, audio and videos at Weisman are a smaller iteration of the full-scale exhibit, but feature artists from almost every continent dating from 1860 to the present. Curator of “Vanishing Ice,” Barbara C. Matilsky, aimed to connect the pieces in an effort to compare old images with new and spark conversation about the importance of our frozen regions.

“I started working on the show almost 18 years ago,” Matilsky said. “At that time people were starting to talk more about climate change and artists were going out to the Arctic and Antarctic, and I thought, how interesting to make a connection between early artists and contemporary art and talk about the cultural importance of these regions.” Participating artist Jyoti Duwadi has been working throughout to past week to sculpt and install his contribution to the exhibition called “Melting Ice.” The 10x10x10 foot sculpture comprises stacked blocks of ice and LED lights, and sits on the front lawn of the Weisman for drivers and passerby to see.

“We talk about glaciers melting or icebergs melting, but other than having a picture, general people don’t have a visual reference. So, I started thinking about what I can do,” Duwadi said.

“As the ice melts, it takes its own form because of the geography, the temperature and the wind current. It’s not so much to educate, but to emphasize the beauty and value of ice.”

This beauty and value of ice is something that drew artists and naturalists to the subject at first. This grand awe is communicated through the 19th century paintings and the “before” photos exhibited. Matilsky noted the changes in interpretation of the work from past to present.

“I know there’s so much political freight about this subject, and I really wanted the artists to be able to cut through that and appeal to people on a very emotional and visceral level,” she said.

As always, Weisman curator Diane Mullin added a bit of local flare to the exhibition and invited University assistant professor of graphic design Eugene Park to collaborate. In his piece, Park designed a visual representation of how much land ice has been lost in Greenland and Antarctica based on data from NASA satellites.

“I think there are several levels of how visitors can look at the exhibit. One is the activist or science side of things, which is the reality that the climate is changing, and that change comes with consequences, specifically when it comes to the change in the global environment that will be detrimental,” Park said.

Park and his associate Kelly Munson will additionally plot readings provided by the National Oceanic and Atmospheric Administration of current carbon dioxide levels in the atmosphere as they inevitably increase over the course of the exhibition. As the amount of land ice plummets and carbon dioxide levels increase, the visuals present an unsettling narrative.

“Another way of looking at [‘Vanishing Ice’] is that artists are responding to science. That’s not to say that art replaces what science is, but I think that artists see how nature can be visually articulated in different ways,” Park said. “That endeavor is something that I hope visitors can absorb. There’s no one way to visualize data.”

“Vanishing Ice,” and its supporting programming will go through May 13.