The team now has just two matches remaining in the regular season. 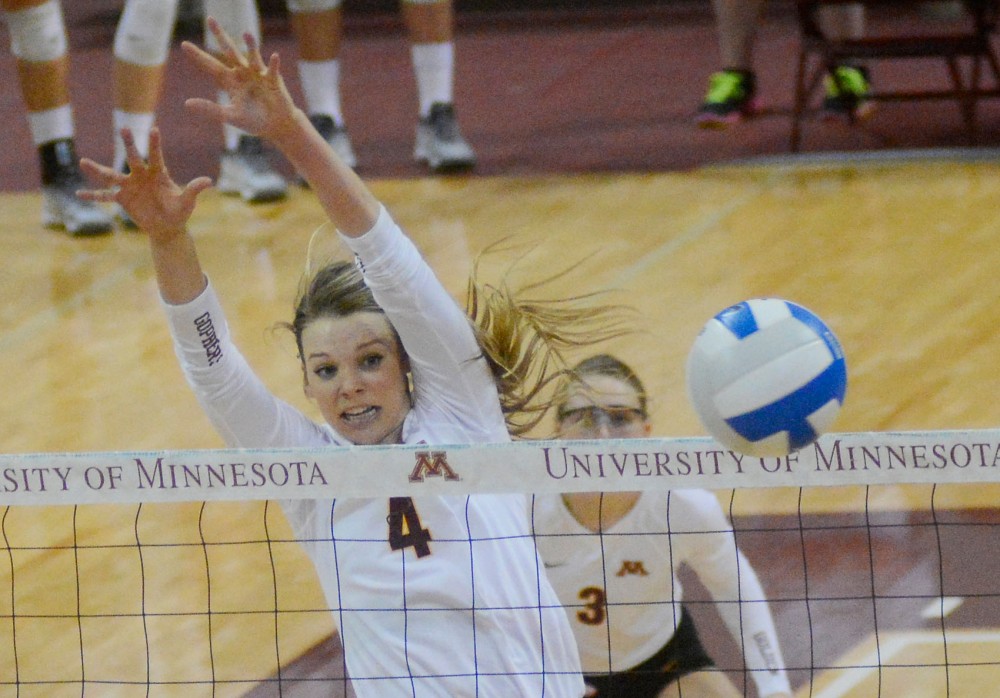 Sophomore Paige Tapp blocks the ball on Saturday at the Sports Pavilion at the match against Purdue. The Gophers won 3-0.

With the regular season winding down, a victory Saturday night against Purdue was a necessity for the Gophers to keep their postseason hopes alive.

And Minnesota got what it was looking for, taking down the No. 16 Boilermakers in three sets.

“It’s really important, relative to our aspirations to be a part of the [NCAA] tournament,” McCutcheon said. “I think we proved tonight that we’re certainly worthy of being in the mix.”

Minnesota continued the successful 6-2 formation utilized in Wednesday’s match, allowing the team to have three hitters in the front at all times and put up a big block on a tall Purdue team.

Blocks were key in this match, and the Gophers had 13 blocks to Purdue’s four.

“I was really impressed with the defensive discipline,” McCutcheon said. “The block and defense was really our strength.”

In an evenly matched first set, the Gophers took down Purdue.

The set victory was largely because of the Boilermakers’ mistakes — Purdue had 10 hitting errors in the set.

Minnesota’s strong blocks put the team up by seven in the middle of the second set, and its defense at the net remained solid throughout the game, helping the Gophers take down the Boilermakers in the second.

“When we take care of the blocks, it frees the defense up to focus on serve receive, and it frees everyone else up on the team to focus on other aspects of the team,” Tapp said. “I think that really helped improve our whole game overall.”

Santana said the team also had great touches on balls at the net, allowing the defense to make good plays.

“We’ve been having a strong block the whole season, but tonight it was everywhere,” Santana said.

In their most recent meeting earlier this month, Purdue swept the Gophers in three sets.

On Saturday, Minnesota went into the third set looking to return the favor.

Santana said what happened in the two teams’ last match wasn’t indicative of how Saturday was going to go.

The Gophers took an early 12-6 lead in the third set, which paved the way for a 25-16 victory and sweep of Purdue.

Tapp said the team had more focus in this match than in the previous meeting with the Boilermakers, and players reminded themselves to “believe, breathe and battle.”

“I think it showed tonight that we were ready to battle,” Santana said.