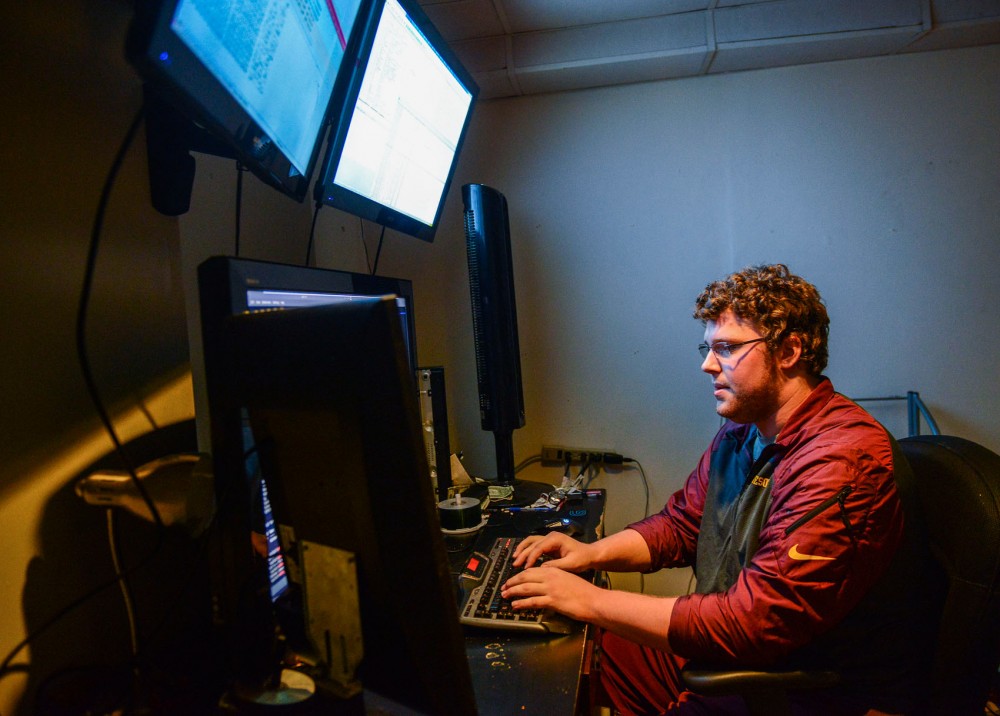 Long before Caleb Bak tried his hand at protecting Gophers quarterbacks from opposing defenses, he was a self-proclaimed nerd.

The former offensive lineman developed a passion for fiddling with computers from a young age, and after a blow to his head knocked him out of college football, his time for technology freed.

“It’s hard for me not to sit down at a computer and tinker with it a little bit,” Bak said.

During the University of Minnesota football team’s 34-23 win over Nebraska last fall, Bak suffered a hard hit that left him with a concussion and a fear that the injury would keep him out of action. Months after, his suspicion came true, and head coach Jerry Kill told the senior that they needed to discuss ending his career because of the severity of his headaches.

“[Kill] said if I was his own son, he wouldn’t let me continue playing,” Bak said. “I appreciate it. It was great having support.”

Once one of the best offensive linemen in the Big Ten — he received an All-Big Ten honorable mention by the coaches —  Bak is now focused on continuing his first passion: hacking.

“[Hacking is] the idea of being faced with a challenge and trying to break through it, the same way [he] approached football,” father Lee Bak said. “He saw it as a challenge even just to get on the team, let alone getting on the field.”

‘An aptitude for computers’

When brothers Caleb and Antone Bak were growing up, their parents only allowed them to play video games if they received straight A’s in school.

“Instead of actually trying hard in school, we spent more time trying to get around computer locks, and it made us love computers more,” Caleb Bak said.

Caleb Bak said he and Antone would log onto computers secretly to play their favorite game, Runescape.

“[They] successfully concealed that from me,” Lee Bak said. “I just know that [Caleb] has an aptitude for computers.”

Antone Bak said his brother had a knack for hacking early on, so it was usually his job to break into the computer. On occasion, Caleb would mess with the hardware.

“My CD drive would just be randomly spinning in and out,” Antone Bak said. “My monitor would be turning on and off. [Caleb Bak] made it look like some ghost was in my room messing with my computer.”

Fast-forward a decade, and Caleb Bak lives in a Southeast Como house with former Gophers teammates Zac Epping, Josh Campion and others, who he said won’t let him touch their computers without supervision.

Caleb Bak is currently working to finish his degree and said he hopes to land a job where he can help keep confidential information secure.

His current computer setup is a big upgrade over the desktop he used as a child.

He built his custom computer himself using parts from Micro Center, an electronics store in St. Louis Park. He has built two other personal computers for himself, along with one for his brother and a few for friends.

Caleb Bak has four displays, which add up to 126 inches of screen space. Two 32-inch monitors hang over his 40-inch television and 22-inch screen that’s shifted vertically. He has also built a server into his closet.

As his computer setup started leveling up over time, so did his play on the field.

Before walking on, he was determined to play at Minnesota and incessantly contacted then-defensive line coach Tim Cross to ask for a shot.

“I called him twice a day and sent him two emails a week and left him two voicemails a week. I did this for two months without a response,” Caleb Bak said.

Cross finally gave in, and the aspiring Gophers player came on as a walk-on redshirt defensive lineman.

“I was pretty damn bad,” Caleb Bak said. “I couldn’t do anything right.”

He was slow to catch on and was subsequently moved down to the scout team, but he finally saw game time in the eighth week of the 2011 season against Iowa.

Bak went on to start the remaining four games and eventually earned a scholarship the following year.

“We’re just really proud of what he was able to accomplish,” Lee Bak said. “Kill told him he had been their best lineman this past season.”

Leaving the game behind

Almost exactly two years after his breakthrough game against Iowa, Bak suffered his head injury in Minnesota’s game against Nebraska.

Physicians didn’t diagnose Caleb Bak with a concussion right away.

“We did push for him to get it looked at before the Indiana game [the next week], but he refused because he said it was too late and he didn’t want to let his team down,” Lee Bak said.

Still, Kill insisted they discuss Caleb Bak’s time with the team if the side effects of his head injury continued.

“[Kill] said, ‘Hey, if things haven’t been getting better for a while, then I’m having some serious concerns about your health,’” Caleb Bak said. “‘So after I come back from the [2014 NFL] draft, we’re going to sit down and make a
decision.’”

JÃ¼rgen Konczak, a professor of biomechanics and neuromotor control in the University of Minnesota’s School of Kinesiology, said rest is the best way to alleviate concussion symptoms.

Caleb Bak said he still suffers from “pretty severe” headaches even though he hasn’t played organized football since November.

“It was a good season for me personally, actually the first winning season I’ve had in my entire career,” he said. “It was a good one to go out on.”