As civil unrest explodes across the Twin Cities in the wake of the killing of George Floyd, UMN students take to the streets around campus to demand action and accountability from the University and city police. 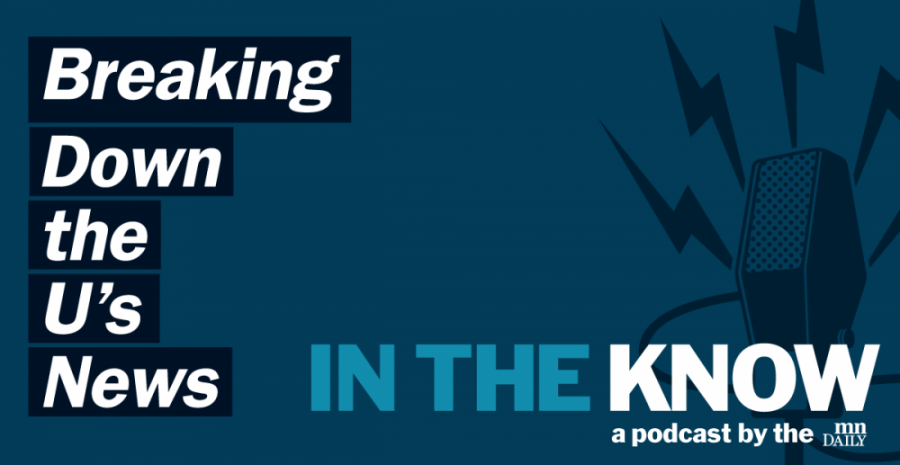 In the Know: Breaking Down the U's News

MEGAN PALMER: Hello, and welcome back to “In The Know.” My name is Megan Palmer, and I’m the new podcast producer at the Minnesota Daily. Our original production plans for this month have been turned on their head.

History is being made in our city, and for that reason, our coverage is going to reflect that. June is going to be dedicated to documenting the context and aftermath of the killing of George Floyd by four former Minneapolis Police Department officers. And what better way to kick off our first summer episode than with a look at the local campus protests.

Please be advised that this episode contains strong language.

MEGAN GERMUNDSON: Hey everyone, I’m Megan G. This is “In the Know.” The Twin Cities have erupted in protest since George Floyd was killed by former Minneapolis Police Officer Derek Chauvin on May 25. As it stands today on June 3, the charges against Chauvin have been increased to second-degree murder, and the three other officers have been charged for aiding and abetting.

PROTEST NOISE AT THE GOVERNMENT CENTER — FADE IN, FADE OUT

GERMUNDSON: Sounds of unrest are constant and seem to be coming from everywhere: Sirens, Twitter notifications, circling helicopters,

HELICOPTERS FLYING ABOVE — FADE IN AND PLAY UNDER TRACK

WOOD BEING DRILLED INTO A BUSINESS FRONT — FADE IN AND OUT

GERMUNDSON: and calls for justice can be heard around the Twin Cities.

“I CAN’T BREATHE” CHANTS AT A PROTEST — FADE IN, FADE OUT

GERMUNDSON: In the past week there have been countless protests, so in today’s episode we’re going to focus on just one organized and led by students.

PROTEST NOISE — FADE IN AND OUT

GERMUNDSON: On Friday, May 29 around 200 people gathered at the University of Minnesota in protest of police presence on campus and the killing of George Floyd. Several University student groups organized the rally outside Northrop Auditorium. Over a dozen speakers called for police accountability as well as divestment from the department.

ANONYMOUS STUDENT: What happened here today is us gaining control over our university won’t matter until —

ANONYMOUS STUDENT: Yeah, that, and we’re just trying to gain back control in our city and Black Lives Matter.

GERMUNDSON: I spoke with one student protester who’s studying sociology of law, criminology and deviance at the University. For her own safety she chose to remain anonymous, citing the violent and mysterious deaths of six men who had ties to the Ferguson protests.

ANONYMOUS STUDENT: My whole career path is focused on the betterment of African Americans. Man, I want to work for the equal justice initiative, working with the wrongly convicted in death row. I want — the policing in the criminal justice system is against African Americans, and I can’t stand by and let it happen.

ANONYMOUS STUDENT: You know what? As a Black woman, of course I’m scared, but I know this is something that I have to do for my children in the future. Like, regardless, I’m going to have Black kids. I have Black brothers, my dad is Black, like Black family members. I’m a Black woman. I’m doing this and putting my life in jeopardy — the greater cause. And I’d rather do that than, than sit on my ass and let history repeat itself. Like this time it’s going to be different.

PROTEST CHANTS  “AM I NEXT” FADE OUT

GERMUNDSON: After the rally, protesters marched down Church Street and gathered in front of the University’s Police Department on Washington Avenue.

PROTEST CHANTS “NO JUSTICE, NO PEACE, PROSECUTE THE POLICE” FADE OUT

PROTEST ORGANIZER: In order to give people a chance to get home before 8 …

GERMUNDSON: Standing on the light rail tracks outside of the department, protesters chanted until close to 8 p.m., giving people a chance to get home before curfew. At this point, the protest outside of the UMPD had ended.

But as people started leaving the area, just around the corner from where they were chanting stood over a dozen UMPD officers in riot gear. Many of the protesters were agitated at the sight of the police as their protest had been nonviolent. I should note that the exact weapons being held by the UMPD officers is unclear.

RANDOM PROTESTOR: Get out because as soon as it’s curfew they’re going to try to arrest you …

RANDOM PROTESTOR: You’re killing your people! You’re supposed to be there for us! Not killing us!

GERMUNDSON: Do you want to talk about what just transpired?

JAYLA: So basically, the police saw we had a peaceful protest. Nothing was broken. We were all just chanting as we were leaving. They wanted to pull up in full gear while one of them was holding their hand right near the trigger of an AK for a peaceful protest full of unarmed people and sat smirking in our faces as if it’s funny to see another Black man killed! They were ready for something to pop off, and they wanted it to.

FANTA: We’re upset because the police are trying to provoke us. They’re here to make us angry, and we’re not going to fall for that shit because they want us to. They want to kill us. That’s why they’re fucking out there — they’re saying we’re violent. This entire protest has been peaceful.

GERMUNDSON: Excuse me, were you folks? A part of the protest? No.

GERMUNDSON: On my way out of the protest, I saw three people lying on blankets in the grass and drinking White Claws across from Folwell Hall. I think it’s important to note that they were white. I asked them about the protest that had just taken place and the 13 officers in riot gear just blocks away from where they were relaxing.

GERMUNDSON: Just gathering to have like a nice evening?

RANDOM WOMEN ON CAMPUS: Just chilling. Trying to be normal.

GERMUNDSON: Yeah. Ok. Thank you. Have a good night.

RANDOM WOMEN ON CAMPUS: You too.

AMBIENT SOUND — FADE OUT UNDER TRACK

GERMUNDSON: Here, speaking to these women, there were two worlds on display: one where people have the ability to “just be normal” in a time like this, and another where people are being faced with military-style police after proclaiming that their lives matter.

GERMUNDSON: Just down the road, despite the looming 8 p.m. curfew, the UMPD protesters had reconvened in Dinkytown.

ABDIQUANI: Yeah. I’m like stretching my legs just in case, just in case I have to get out of here.

ABDIQUANI: We came from, uh, the protest that was happening at Morrill Hall that ended at the police department, and everybody just kinda congregated over here.

GERMUNDSON: Around 50 demonstrators blocked off access to Southeast 4th Street. Even as a motorcycle attempted to drive straight through the crowd, the protesters were able to steady each other’s nerves, deter the biker and maintain nonviolence.

AMBIENT SOUND — FADE IN AND PLAY UNDER TRACK

GERMUNDSON: They stood their ground firmly for over an hour before marching through Dinkytown, crossing the 35W Bridge and joining up with a larger protest.

FATAH: We’re the standardized person. We’re not different. We’re not other.

AMBIENT SOUND — FADE IN AND PLAY UNDER TRACK “Say his name, George Floyd!”

GERMUNDSON: The student-led demonstrations surrounding the killing of George Floyd and police brutality in general are ongoing. And despite being met by an increased police and National Guard presence, the protesters are planning on continuing to stand their ground.

PALMER: That’s all for this week on “In The Know.” Thank you for tuning in, we’ll see you next Thursday.