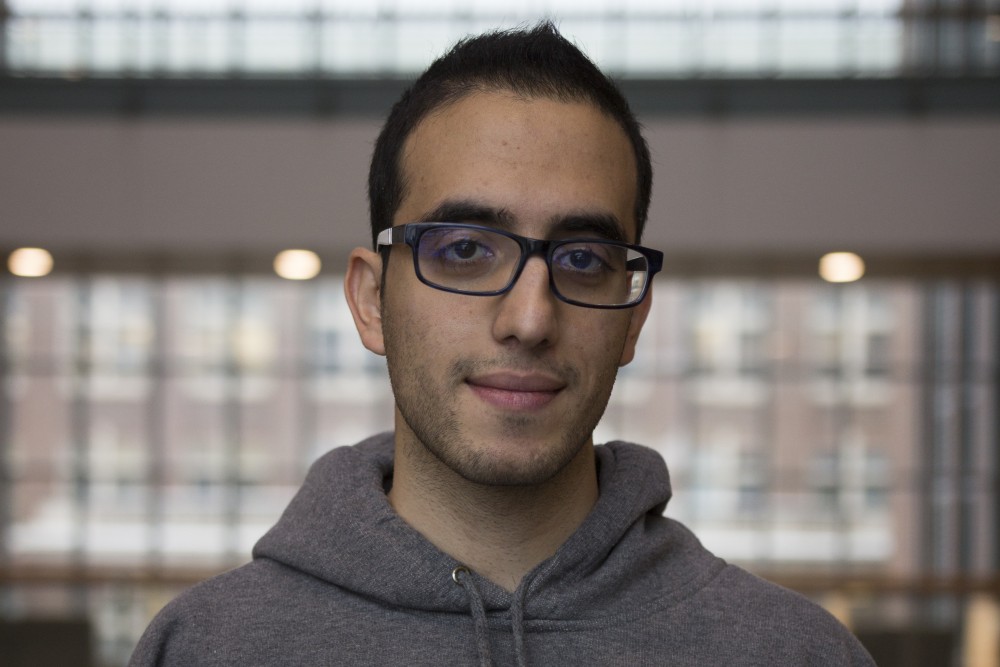 Sina Shirinpour, a Ph.D. Candidate in the Department of Biomedical Engineering, poses for a portrait inside Nils Hasselmo Hall on Wednesday, Dec. 13. Originally from Tehran, Iran, his residence in the U.S. is affected by the Supreme Court's ruling of the new travel travel ban.

Approximately 150 students and scholars at the University will be affected by the Supreme Court’s Dec. 4 reversal of an injunction restricting the ban. The ban is currently being appealed in district courts in Hawaii and Maryland.

The ban prohibits all Iranians from traveling to the U.S. Students with valid student visas can stay in the U.S., but the ban makes it nearly impossible for these students to leave and re-enter, Hill-Dongre said.

Under this ban, which is the third version of the policy, Iranian families cannot visit their student family members in the U.S.

“I cannot visit there. They cannot visit me,” said Sina Shirinpour, a biomedical engineering Ph.D. candidate and native of Tehran, Iran.

Shirinpour said he came to the U.S. nearly two and a half years ago on a single-entry visa. Even without the ban, Shirinpour said he must reapply for a new visa each time he leaves the U.S., but the ban makes reapplication riskier.

“I’ve had friends who had traveled back home and got rejected and they had to go to Canada… to continue their Ph.D.,” he said.

In Iran, it is common for students to pursue graduate or doctorate degrees at American universities, especially in engineering and science fields.

Hill-Dongre said she worries about the implications the ban could have for higher education.

“There’s a really rich history of Iranian scholarship at U.S. universities and [the ban] would effectively end that,” she said.

The travel bans have complicated the future of international students at the University.

“There’s so much uncertainty because people are still applying for programs. [International students] are still hoping to come to the U.S.,” Hill-Dongre said.

Unlike the two versions that came before it, “this travel ban has no time limits,” said Steve Meili, a University professor who specializes in immigration law.

Although the ban is now in effect, cases will be tried in District Appellate courts in Hawaii and Maryland. Once a decision is made, it will likely be appealed.

“[The ban] will end up in the Supreme Court, I think, within the next few months,” Meili said.

If the ban remains in place, Shirinpour may not see his family until he finishes his Ph.D. program three and a half years from now.

“[Iranians] are just normal people like everyone else,” Shirinpour said. “We have already been through extreme processing to get [to the U.S.]. This whole travel ban… it’s not based on any fact, it’s just pure discrimination.”