Coyle talked about the protocol for athletes, testing and what will happen if an athlete tests positive. 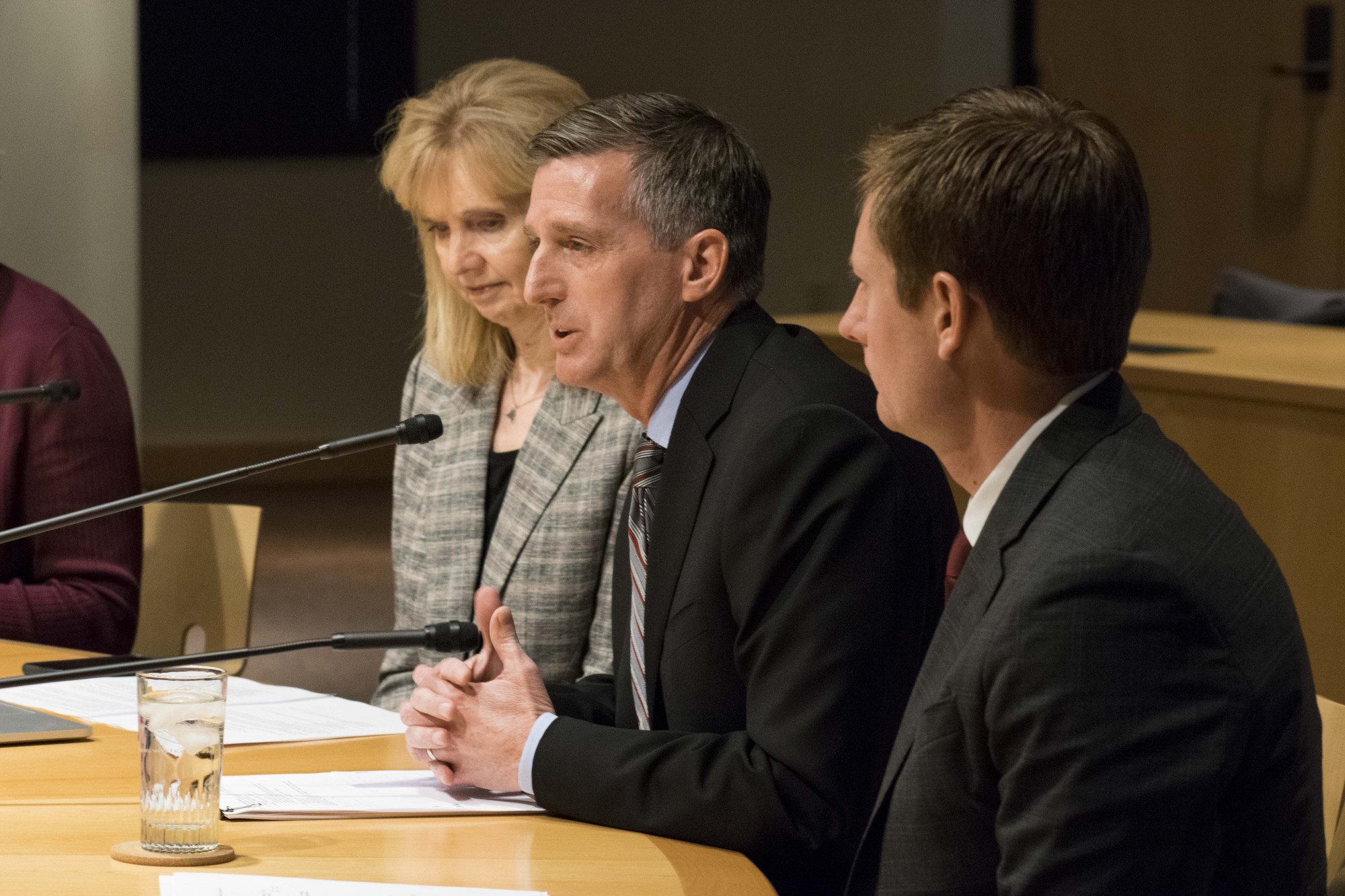 Athletic Director Mark Coyle addresses the Board of Regents in regards to a contract extension signed by head football coach P.J. Fleck at the McNamara Alumni Center on Thursday, Nov. 14, 2019. The deal, signed by Fleck last week, extends his contract through the 2026 season and will increase his base salary to $4.6 million.

At long last, sports are moving towards a path of return, and leagues across the United States are devising strategies to make that return as safe as possible. University of Minnesota athletics director Mark Coyle explained what that process will look like for Gophers athletes and the plans in place to limit the spread of COVID-19.

When the University — and the NCAA at large — had to make the difficult decision to cancel end-of-season tournaments for winter and spring sports altogether, anticipating how the situation would change by the fall was difficult. Coyle said that with so many new challenges, nobody really knew what to expect, but he was grateful for the leadership from Big Ten Commissioner Kevin Warren and University President Joan Gabel during the decision-making process.

The Big Ten formed the Task Force for Emerging Infectious Diseases in April, with representatives from all member schools to advise the conference on the best path forward. Coyle said the group provides “tremendous insight and guidance to the athletic directors.”

“Decisions made at the conference and University level are data-driven, and they are following the science,” he said.

Even with all possible precautions in place, the risk of virus transmission and infection is still present. Though the return to campus is entirely voluntary, the University began allowing certain athletes to return to campus June 12. Currently, members of the football team are the only athletes back, but the plan is to allow athletes from other fall and winter sports — volleyball, soccer and basketball — to join them soon.

Coyle explained that the University would be following the recommended guidelines from local authorities in day-to-day operations, with the athletes and staff practicing social distancing, proper sanitation techniques and recommending mask-wearing. He also said that the testing of athletes was something the Big Ten was strongly recommending to member schools, and the University’s procedure would include multiple tests as well as symptom and temperature checks incorporated into a daily screening process.

In the event someone on either the staff or an athlete were to test positive, the next steps would follow in accordance with the CDC guidelines, meaning the individual would isolate for 10 days from the start of their symptoms and would need to show no signs of fever for three days after. Even though they would be isolated, Coyle said the athletes would not be without support.

“Student-athletes who test positive will have access to all necessary resources and will also be in daily contact with members of our athletic medicine staff. We will do contact tracing for individuals who had been around the person who tested positive, and those individuals will be asked to quarantine for 14 days and to monitor any potential symptoms,” he said.

Though these practices will be followed by the entire athletics department, the virus could impact athletes differently. Studies have shown that the virus is disproportionately impacting Black Americans, and while some sports may be able to maintain some level of social distancing during play, it’s nearly impossible in a high-contact sport like football where a significant portion of the Gophers athletes on the roster are Black. Coyle described the heightened risk for certain athletes as an “added layer of concern.”

As difficult to plan all of these safety measures are for schools, fellow Big Ten school Ohio State recently raised eyebrows over its methods. In an article published June 14, The Columbus Dispatch reported that the school’s football program was requiring its athletes to sign a “risk waiver” in order to return to workouts. While not legally binding, the document — dubbed the “Buckeye Pledge” — placed the responsibility to maintain healthy on the athletes themselves, and asked them to acknowledge that the risk of infection was still possible.

“Although the university is following the coronavirus guidelines issued by the CDC and other experts to reduce the spread of infection, I can never be completely shielded from all risk of illness caused by COVID-19 or other infections,” the document read.

When asked if Minnesota’s athletes would be required to sign something similar, Coyle said that the athletics department would “provide our student-athletes with educational information about COVID-19.”

“We will ask our student-athletes to sign these materials to acknowledge their receipt and understanding of the information. This is not a pledge, and there is no pledge language included in these materials.”

Returning to a semblance of normalcy in sports in the middle of a pandemic comes with a multitude of challenges and potential risks, but Coyle said that while it is hard to predict the future, he is confident in the current plan and their ability to adjust when needed.