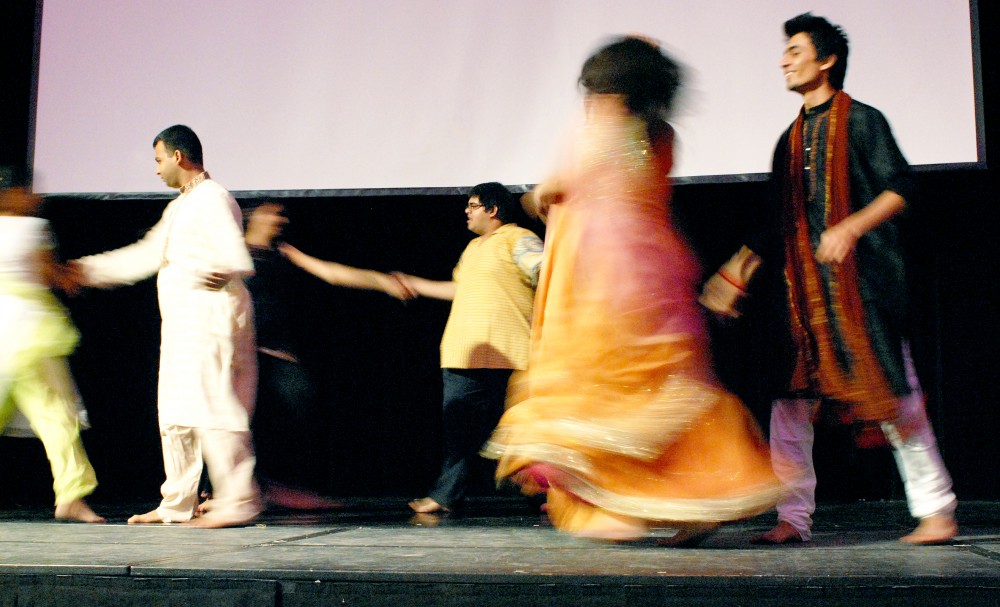 More than 150 people put on their kumkum and danced the night away to celebrate Diwali at Coffman Union Saturday night. Bharat and Minnesota International Student Association hosted Diwali Mela and offered people a night to celebrate the Indian festival of lights. Food, a deejay and dance performances were all part of the celebration for Diwali, which was actually on Tuesday, but with the Great Hall reserved for a Homecoming blood drive, the event was forced back to Saturday. During Diwali, people pray and light lamps to pay thanks for attainment of health, wealth, knowledge, peace, valor and fame. Diwali is a fun celebration before the Hindu New Year the following day when people visit their families, chemistry senior Unmil Patel said. âÄúThere are celebrations for an entire week, and each day has a different theme to it,âÄù he said. Patel is president of MISA, and said eight of the 10 MISA board members volunteered during the festival and performed a dance toward the end of the four-hour event. People were welcomed Saturday with kumkum, a commonly used red powder, for their forehead and kaju katri , an Indian sweet made from cashews. The group Bharat, which means India in Hindi, began in 2006 and seeks to build a bridge between Indian and American cultures by educating people about Indian traditions . âÄúWe also want people from other cultures to come experience Indian culture,âÄù Bharat President Nidhi Jani said. Bharat received a combined $2,200 from a Small Events Funds grant from the Minnesota Student Association and a grant from the Graduate and Professional Student Assembly. Jani, an independent studies senior, said the holiday is celebrated by all of India, and they usually light firecrackers. Because of a costly insurance waiver, though, Jani said they decided to light a bunch of candles instead. The festival also featured free games where people could win raffle tickets for a number of prizes, including an iPod nano, and dance performances from students and children. Physiology junior Iaswarya Ganapathiraju performed a south Indian classical dance called Kuchipudi that she has been practicing since she was 11. âÄúIt has an Indian flare which makes it all the more cultural and closer to my heart,âÄù she said. Bharat also focuses on giving back to the community, and the celebration had a few booths featuring local volunteering opportunities. A few vendors came to the event selling a variety of jewelry, henna and clothing, including Pooja Garg , who intended to give all of her proceeds to Bharat. Garg owns a boutique named PureDesiDiva . She said the group is doing a great job to bring Indian culture to the University. âÄúTheyâÄôre very authentic, and theyâÄôre very real,âÄù she said.