Bain Boehlke weaves a tale of power and greed in the Jungle Theater’s interpretation of “Deathtrap.” 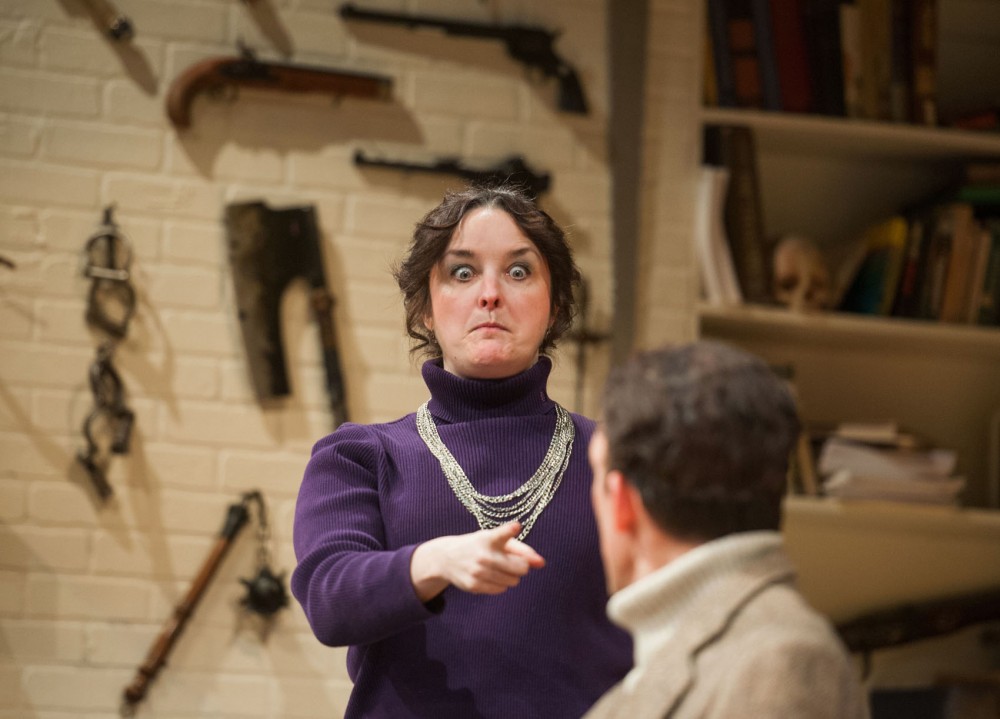 Cheryl Willis plays the role of Myra during a rehearsal for Deathtrap on Tuesday, March 26, 2013, at the Jungle Theater in Minneapolis.

Bain Boehlke does not own a harness or a set of carabineers. This won’t stop the artistic director of the Jungle Theater from insisting he’s a climber, though.

“I call iconic plays the great mountains we like to climb. Hamlet would definitely be a K2,” he said. “And we all like to scale those mountains — can we do them? Can I summit? Can this actually happen?”

He’s talking about Ira Levin’s “Deathtrap,” the second play in the Jungle’s season this year. The murder mystery thriller is a solid classic in the theater canon due to its unexpected twists and sharp dialogue. First produced in 1983, it holds a spot as one of the longest-running plays on Broadway, spawned a film starring Michael Caine and is frequently revived internationally.

Rather than intimidating Boehlke, this draws him to the piece, positioning him to make something new.

“There’s nothing groovier than smashing people’s expectations. It means they have to give up. They have to surrender, and then they have to go on a journey that they know nothing about,” he said.

Audiences will clutch on to the black comedy of “Deathtrap” if Boehlke gets what he’s hoping for. The play is a fast-paced and traditionally structured mystery that centers on washed-up playwright Sidney Bruhl and his plot to murder a younger writer and steal his script.

“There’s thunder and lightning and all of that — an amber velvet curtain that flows in an amber velvet proscenium arch. It’s got that good ol’ time religion theater feel about it,” Boehlke said.

Actress Cheryl Willis asserts that the multilayered play avoids the cornier stereotypes of the murder mystery genre through Boehlke’s embrace of the basics.

“The audience is given credit to use their intelligence and we’re not forcing some style or anything upon them. All we do is go back to the script,” she said.

According to Boehlke, this is all the Jungle tries to do in their work. He deeply believes in sticking to the simple logic of a play and creating a world from it rather than using gimmick.

“It’s the architectural plan for an event that touches and moves human beings and lives in the specific time of its being done,” he said.

It’s a technique that works for the company, with Boehlke receiving a Lifetime Achievement Ivey Award in 2011 and holding a permanent mark in the Twin Cities theater community with his co-founding role at the Children’s Theatre Company.

In fact, Boehlke’s become something of a local legend among the artists he’s worked with. Willis attributes this to his willing and filter-less personality.

“He comes from an instinctual place,” Willis said. “He moves forward, forward, forward — it’s a joy to be around, and it’s also really scary because you don’t know what he’s going to say.”

Whatever he ends up saying, Willis adds that it’s usually useful, even if it’s not immediately obvious.

“He has his ears open in that he listens to the sounds and the rhythms of the language,” she said. “He feeds you a lot of things that are sometimes to alien to your mouth, but once it all comes together, you end up with a character that you didn’t even know was there.”