The freshman had the Gophers only singles victory at No. 11 Michigan. 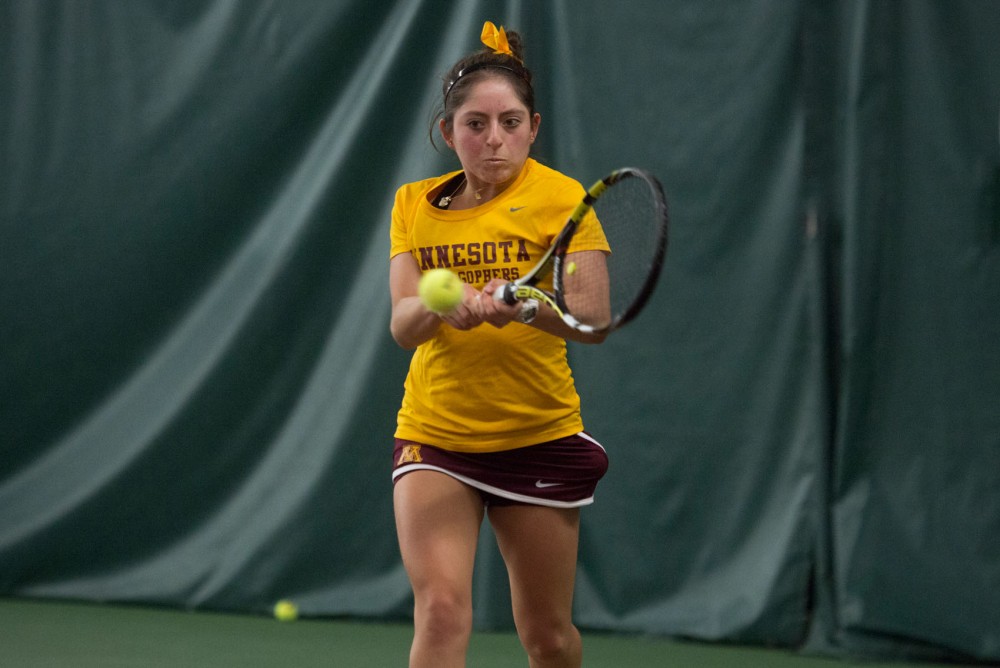 Camila Vargas Gomez returns a shot during a match against Michigan State University on April 1 at Baseline Tennis Center where the Gophers defeated Michigan State, 5-2.

Jack White
The Gophers’ three freshmen have all earned playing time this spring, but Camila Vargas Gomez is leading the pack.
The rookie from Lima, Peru, is 7-7 singles in the spring and also has a doubles victory.
“After she plays her matches, she always goes back to practice and keeps going over things and improving,” associate head coach Whitney Taney said. “She’s really transitioning and adjusting well to college tennis.”
The freshman has stepped up at key times for Minnesota, especially in duals against Buffalo University and Iowa State the first weekend of March.
Vargas Gomez earned the Gophers fourth point of the match in both duals to clinch two victories.
She was also the only Minnesota player to win a singles match against No. 11 Michigan last weekend, defeating junior Sara Remynse 6-4, 6-4.
“Now that I have to play against Big Ten teams, I think that it’s pretty important to be really consistent but at the same time be aggressive,” Vargas Gomez said. “So I’ve been working on that, and I think it’s working pretty well so far.”
Vargas Gomez brought a lot of international tennis experience over when she joined the Gophers.
She competed in the Fed and Junior Fed Cup as a 16-year-old, and she won the gold medal in doubles at the International Youth Games.
When she came to Minnesota, though, she had to adjust to things as simple as the court.
“I feel that I’ve been moving very quick individually. I used to play on clay court back home, and now I play on hard court, so, like, it’s different. And now I feel way more comfortable,” Vargas Gomez said. “When I first came here, it was pretty tough to get used to hard court.”
She went 7-5 in singles in the fall and 8-3 in doubles and was paired with senior Paula Rincon-Otero for three matches. Rincon-Otero is a native of Madrid, Spain, and the two would speak Spanish to each other on the court.
“It’s nice to have someone I can talk to in the same language,” Rincon-Otero said. “It was fun to play with her; it reminded me of home a lot, so it was nice.”
The Gophers have four matches left in their regular season, all against unranked opponents, and Vargas Gomez will attempt to finish out on a winning note.
“She’s consistent from the baseline, and now we just have been working on her transitioning to the net more, which is really good for college tennis because then it complements her good ground strokes,” Taney said.
Delete Image
Align Left
Align Center
Align Right
Align Left
Align Center
Delete Heading