Through the rain and a quarterback change, Minnesota falls short against No. 21 Michigan State

Quarterback Conor Rhoda was benched in favor of Demry Croft during the second quarter. 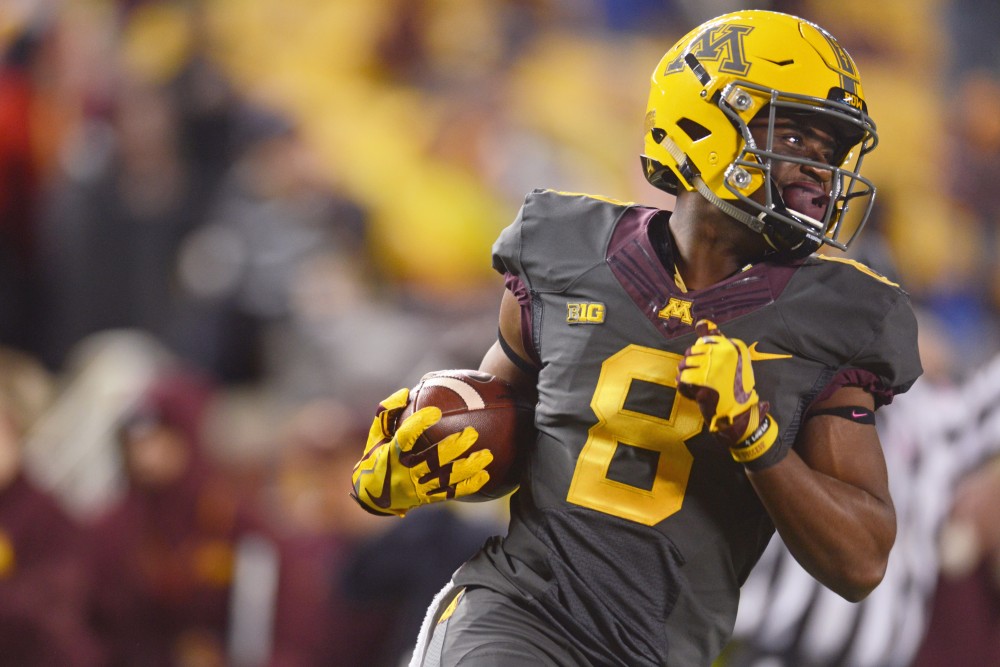 Wide receiver Mark Williams shows excitement after a Gophers first down during the game against Michigan State on Saturday, Oct. 14 at TCF Bank Stadium in Minneapolis. The Spartans beat the Gophers 30-27.

Croft found his rhythm in the fourth quarter and connected on three touchdown passes, but that wasn’t enough for a victory in the rain on Saturday night.

“They did what Michigan State does — they run the ball,” said head coach P.J. Fleck. “This is all 100 percent my fault. [It] all falls on my shoulders.”

While they didn’t manage to come back and win, the Gophers found new life against the usually stingy Michigan State defense later in the game, and scored 21 points in the fourth quarter.

Michigan State’s defense held Minnesota to 290 total yards. While the Gophers had 216 passing yards, they only had 74 rushing yards, and 51 of those from the tandem of running backs Rodney Smith and Shannon Brooks.

Minnesota, at one point down 30-13, pulled to within three points in the fourth quarter, but couldn’t finish the comeback.

Throughout the comeback, Gophers wide receiver Tyler Johnson found his way to the stat sheet again. He had three second half touchdowns and finished with eight receptions for 106 yards.

“I would say our preparation this week was key,” Johnson said. “We knew going into the game that it was going to be different types of matchups that would be played out in the game.”

Most of the passes came from Croft after he entered the game.

After only six points scored through the first half, quarterback Conor Rhoda was benched. Croft hadn’t played since the second game of the season against Oregon State.

The Gophers depleted defense saw one piece of good news, however, when safety Duke McGhee returned from a suspension. He missed the first two conference games of the season. The senior made an impact early in the game with his first interception of the season, which resulted in the Gophers getting three points from a field goal.

McGhee was a highlight on the pass defense, but the run defense that struggled against the Spartans.

The Gophers gave up 245 rushing yards in the game. The team held Michigan State to just 120 passing yards.

The season as a whole, not including against Michigan State, Minnesota had only allowed 571 yards on the ground, but 1,001 yards through the air.

Minnesota was involved in its second consecutive weather delay Saturday.

After being delayed nearly 90 minutes in the fourth quarter against Purdue, the Gophers had to postpone kickoff until 7:44 pm, a delay of 34 minutes.