A look at the fashion of Flip Phone’s ‘Cher Drag Brunch.’

“This is one of my favorite pieces I’ve seen her wear,” Olsen said. “It’s a classic.” 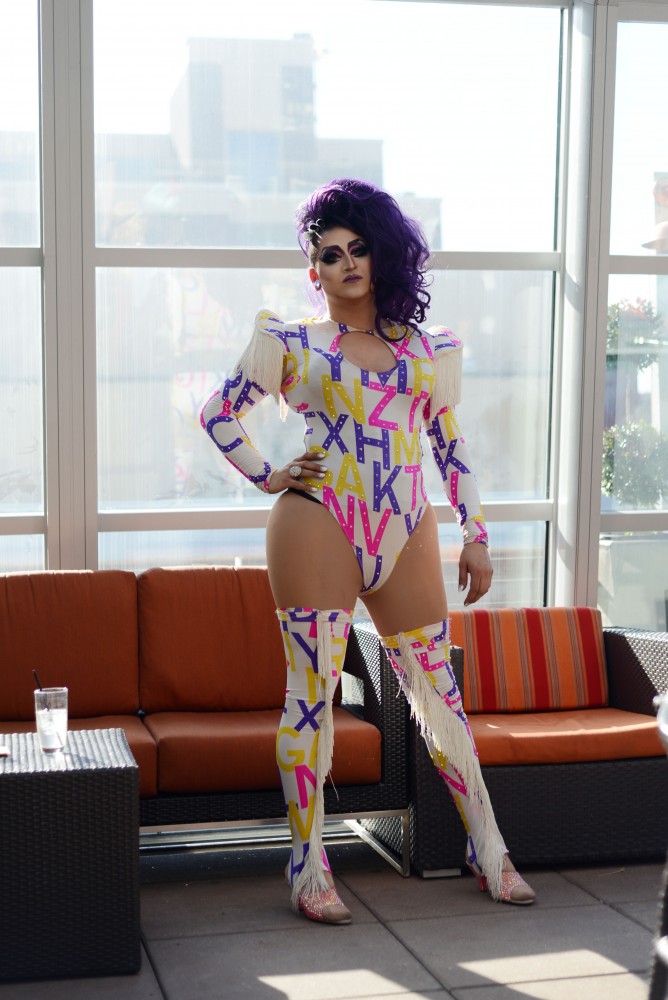 Flip Phone,an inclusive party-planning group, hosts hundreds of LGBTQ-friendly events around the Twin Cities every year. Usually, the events focus on some sort of popular figure from the early 2000s, or a theme that was popular during the “flip phone era.”

Drag shows are one of the primary vehicles for exploring these themes. Most Saturday mornings, Flip Phone hosts a drag brunch centered on an LGBTQ community hero.

Last week, the brunch theme was based on the Disney Channel movie “Hocus Pocus.” Next week, it centers on the songs of Dolly Parton. This Saturday, the theme was based around the music of popsuperstar Cher.

Between unlimited mimosas and plates stacked with formal food fare, the atmosphere of the third story dining area of Union Restaurant in Minneapolis was upper-crusty.

The morning’s first performer was Kamaree Williams. Unlike most drag performers, Williams uses her given name as her stage name.

Williams’ first outfit was BDSM-inspired lingerie. She wore a flesh-colored bra, straps around the waist and legs and multiple necklaces. Her second outfit was a skin-tight cocktail dress imprinted with light blue, yellow and orange feather images. This ensemble also included a long flowing scarf over her right shoulder.

“This is the least amount of skin I’m going to show,” Williams said. “When you see me in a dress that’s the most you’ll see me in. My drag aesthetic is pretty naked.”

Williams is a veteran of the drag brunch circuit. She designs and creates most of her own outfits, even sewing certain pieces herself.

Williams performs at all of the Beyonce-themed brunches and First Avenue events. She considers this to be her “main base of operations.”

The next performer, Nathan Campbell, goes by the drag name “Alana Chapelle.” At the event, Chapelle wore a white one-piece covered in purple, pink and yellow letters. This included an ungodly-sized fake diamond ring and shoulder pads.

“There is no way I was gonna try to compete with Nina [DiAngelo],” Campbell said. “No way I could top her impersonation. So I just did a more general costume — more like my normal act.”

This is Campbell’s second Flip Phone Drag Brunch, the first of which was Harry Potter themed. For this outfit, Campbell performed to Cher Lloyd’s “Want U Back.”

“I thought I would do a different Cher first,” Campbell said. “The rest of my songs are actual Cher songs.”

The third and final performer was Jamie Olsen, who goes by the stage name Nina DiAngelo.

Olsen wore a recreation of a famous Cher outfit from an appearance in the 1980s: a long, black, sequin-covered dress and a huge headpiece, complete with a fake microphone.

Olsen is a “massive Cher fan” and took this opportunity to delve deeply into the Cher outfit catalog.

“This is one of my favorite pieces I’ve seen her wear,” Olsen said. “It’s a classic.”

Olsen has been sewing for years and uses the skills they’ve honed to make nearly every outfit they wear to drag performances.

This was Olsen’s first Flip Phone Drag Brunch. For this outfit, Olsen performed to a cover of Cher’s “I Still Haven’t Found What I’m Looking For.” Olsen performs every month at Hell’s Kitchen.

Each performer went twice. The goal was to create a variety of songs that helped represent the different facets of each performer’s personality. People shoved cash at them any time they were near a table or the bar. People were generous; people were impressed.

But I promise — it wasn’t just because of the mimosas.