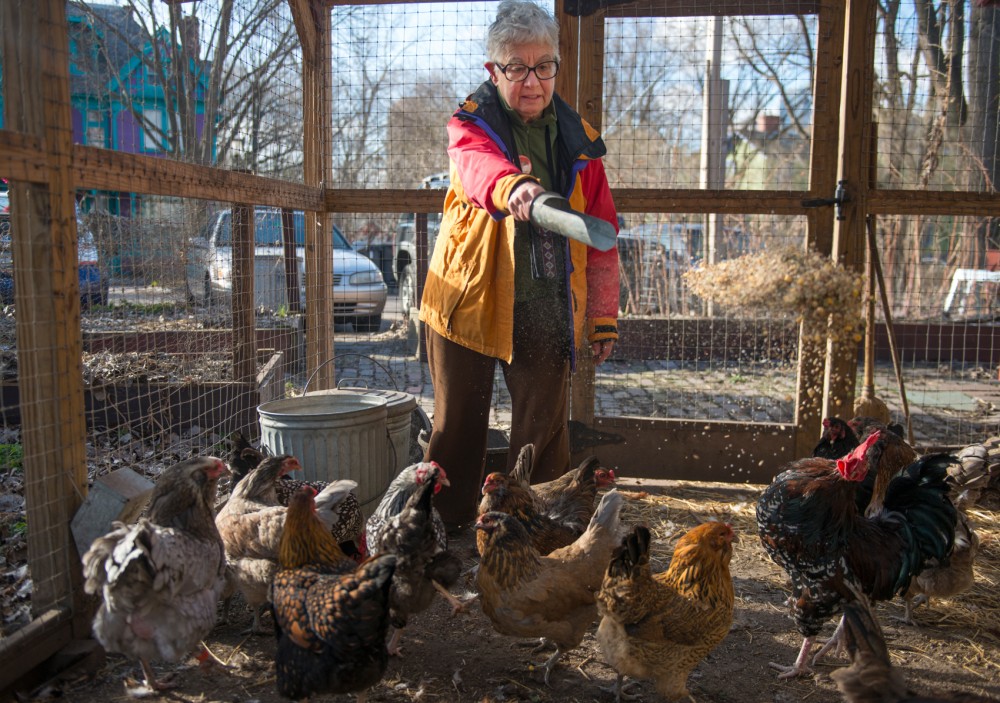 Representative Phyllis Kahn throws feed for chickens at her home before going door-to-door canvassing Saturday morning. Phyllis Kahn is running for re-election in 2016 for District 60B.

Kevin Beckman
In 1972, Phyllis Kahn filed a discrimination complaint against the University of Minnesota after she wasn’t granted the same tenure as her male colleagues.
Kahn was a researcher for the University, and shortly after she filed her complaint, she found out her research grant had been cut in half. She was sure it was a form of retaliation.
Kahn had been considering getting into politics, but until that moment, she thought she liked her job too much to leave it.
“As soon as that happened, I just said, ‘OK, that’s it. I’m going to face these guys across the legislative table instead of from my lab bench,’” she said.
Soon after, Kahn — a DFL member — ran for the Minnesota House of Representatives in District 57A and won. Forty-four years later, she still holds a seat in the House; though she now represents District 60B, which contains the University’s East and West Bank campuses and surrounding area.
But with November’s upcoming election, Kahn, 79, faces two challengers — Ilhan Omar and Mahamud Noor — to win the DFL’s nomination for the general election. A candidate will officially receive an endorsement at the party’s district convention on Saturday.
When she was sworn into office in 1973, Kahn was one of only six female members of the House. She helped to pass several bills related to women’s rights, including Minnesota’s no-fault divorce bill, which allows couples to file for divorce based on a mutual desire to end the marriage, rather than one party having to prove the grounds for
divorce.
“No attorney in the Legislature in either body would touch it,” Kahn said. “So people came to us to do it.”
Rep. Diane Loeffler, DFL-Minneapolis, said she was able to keep her maiden name after marriage in part because Kahn was part of the few state legislators at the time working to make sure women had those kind of choices.
“She’s not afraid to take on difficult issues and be persistent with those,” Loeffler said.
Other bills authored by Kahn have been lauded as groundbreaking and ahead of their time.
Kahn’s legislation on gender equality in athletics paved the way for a more equal playing field for high school and college athletes, said Rep. Lyndon Carlson, DFL-Crystal, who was elected alongside Kahn in 1972.
“There probably isn’t a young woman in the state of Minnesota at the high school or college level that didn’t benefit from her advocacy for equal opportunity in athletics,” Carlson said.
Yet, some of Kahn’s bills have been met with skepticism from both sides of the aisle, including proposed legislation that would lower the voting age to 16 and the drinking age to 18.
“People think, ‘Oh, yeah, that’s a Phyllis bill,’ because they just can’t imagine passing that,” Loeffler said.
Without abandoning her background in science, Kahn has authored more than a dozen bills related to health and the environment, including the 1975 Minnesota Clean Indoor Air Act, which controlled smoking in public places. She has also sponsored legislation on nuclear safety, radioactive waste disposal, field tests of genetically modified crops and infectious waste disposal.
She chief-authored the computer crime and computer virus laws and was an instrumental part in the overhaul of the state’s information technology system in 2011.
“You wouldn’t expect this 70-year-old legislator in Minnesota to be on the cutting edge of technology,” said Rep. Melissa Hortman, DFL-Brooklyn Park. “She has the mind and the ingenuity and the energy of the youngest legislators.”
Mohamed Jama, chair of the West Bank Community Coalition and executive director of the Cedar Riverside Youth Council said Kahn has worked to make sure ample resources are delegated to the district.
“I have known Phyllis the last six years, and she has always delivered.”
Kahn said she plans to continue working with Somali leaders. She recently chief-authored legislation to appropriate $2 million in investments for statewide Somali youth development programs designed to increase engagement, mentoring, scholarships and job opportunities for Somali youth in the state.
Kahn also said she plans on making student debt issues a priority.
She recently chief-authored a bill to allocated funding for student loan refinancing.
Even after four decades in the Legislature, Kahn seems ahead of her time, said House Minority Leader Paul Thissen, DFL-Minneapolis.
“Things she’s talking about today are topics the Legislature is likely to address in five or six years,” he said.
Still, critics of Kahn have said 44 years is too long for one individual to hold office.
“I don’t know how I can stand by someone who has been in office since the seventies,” said Abeer Syedah, University undergraduate student body vice president. “There is a time for people to hand the ropes over.”
Syedah, who has publically supported Omar, said Kahn hasn’t represented the district’s population of students.
“Representative Kahn … should have been one of the most forceful voices for higher ed in the House, and I don’t feel like that has been the case,” she said.
Others say those 44 years make Kahn a valuable source of institutional knowledge for other Legislature members.
“That’s really a plus when you have such an ever-changing legislative body,” said Rep. Sheldon Johnson, DFL-St. Paul.
Colleagues said Kahn has been a mentor to younger legislators, a “formidable challenge” to opponents and is able to maintain a sense of humor in the face of opposition from fellow legislators.
“She’ll just say, ‘Hey that’s crap,’ ” Hortman said. “But since she has such a good sense of humor, she’s able to do that in a way that people laugh instead of getting offended.”
Her Republican colleagues say Kahn is rarely concerned about speaking her mind.
“She isn’t afraid to ruffle feathers if she believes strongly enough in something,” said Rep. Sarah Anderson, R-Plymouth. “Whether it’s her own party or otherwise.”
Delete Image
Align Left
Align Center
Align Right
Align Left
Align Center
Delete Heading