A peek inside the new University Ave. dorm

The residence hall will feature meeting space for greek chapters. 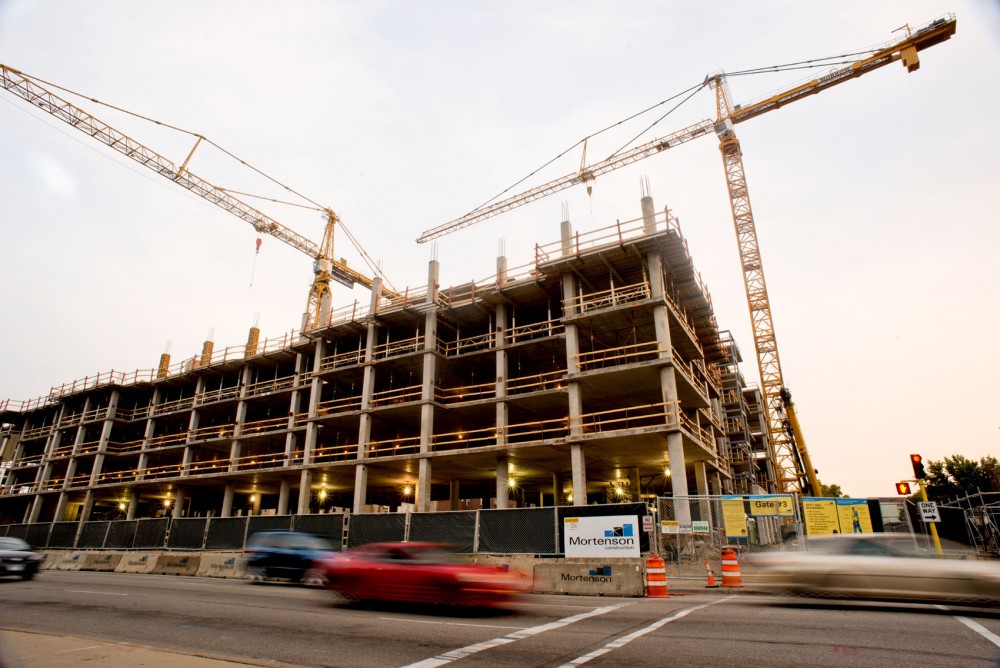 Construction continues on the new residence hall on 17th and University Avenues Southeast.

The residence hall under construction at the intersection of University and 17th avenues will cater to greek students when it opens next fall.

Unique aspects of the hall include greek housing and a distinctive dining design with pods where the food is both prepared and served.

For example, greek organizations without a house and chapters that are new to campus could use the space, she said. A smaller room located on the 17th Avenue side would also be available for lease.

A first-year Living Learning Community for students interested in sorority or fraternity life may be included in the hall for students to learn about greek opportunities, McLaughlin said.

Beta Theta Pi President Matthew Niezgoda, whose chapter house is across 17th Avenue from the new residence hall, said he is anticipating more traffic on the block once the project is complete.

“We’re going to be more visible,” he said, which will help with recruitment and promotion efforts.

“It can be a very positive thing.”

The new residence hall will also include a non-traditional dining design, in which the production, serving and seating sites are integrated.

Called the “Fresh Food Company,” the dining hall will be made up of six to eight modules or pods where students can watch the food being prepared by employees. Pods will include a Mongolian grill-style wok and a salad bar, among others.

From a customer’s perspective, the only areas that won’t be visible are the storeroom and the loading dock, said Karen DeVet, director of dining services.

“The idea is then that everything that’s being served is being prepared fresh,” she said.

The new dining plan deviates from the traditional method of going through a line to receive food and then proceeding to a different room for seating. Instead, seating will be within a few feet of each pod, said Leslie Bowman, department director of contract administration for the University Dining Service.

A desire to try something new and create a more attractive dining experience prompted the shift in dining design, Bowman said.

“I think a lot of our residential dining facilities are pretty dated,” she said. “We really welcomed the opportunity to build from the ground up.”

The dining hall will be available for use by all students. Bowman said there will also be a separate entrance open to the public, allowing faculty and staff to buy meals. It will also include many windows and several varieties of tables such as high, low and “family-style,” Bowman said.

“We believe this will be a pretty exciting addition to our dining program on campus, and others are going to want to come and experience it,” DeVet said.

Housing and Residential Life has a housing guarantee for first-year students who apply and are admitted to the University by May 1, McLaughlin said.

In order to meet the student demand for housing, 300 to 400 students have been placed in expanded housing each year, she said, including lounges instead of traditional rooms, for example, or putting two students in what was originally designed as a single occupancy space.

The 17th Avenue Residence Hall project was first discussed in the fall of 2010 in response to student demand for housing, McLaughlin said. Construction began early this year and is scheduled to conclude during the summer of 2013.

The location of the hall was chosen based on a variety of factors, including its proximity to East Bank classrooms and recreation facilities, McLaughlin said.

Before construction, the site included a surface parking lot and a classroom building that was demolished.

The hall will include primarily double occupancy rooms and provide space for 600 beds.

While some students are largely unaware of the project, others would be interested to live there.

She said she would “for sure” want to live in the new hall if she was an incoming freshman in fall 2013.

“I’m excited to see how it turns out,” said elementary education freshman Emily Verrastro. “The location is nice, I think. It’s close to [Northrop Mall].”