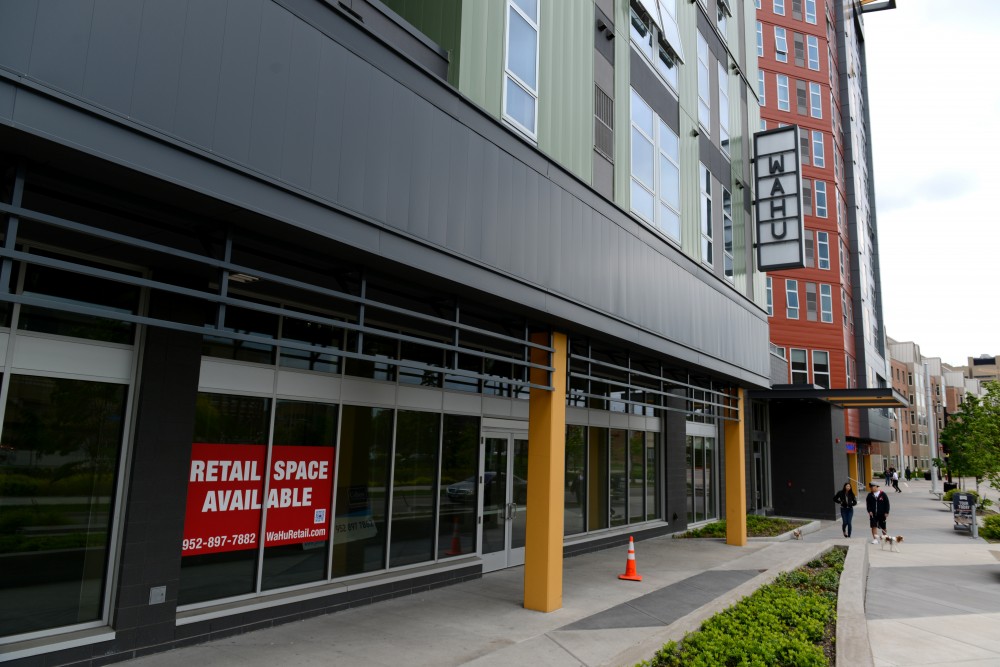 A view of the retail spaces available for leasing underneath Wahu apartments on Tuesday, May 30.

After two years, the WaHu apartment complex in Stadium Village is still having trouble filling the retail spaces beneath it.

A new Vietnamese inspired cafe, Bambu, is set to open in the fall, but the cafe is only the fifth addition to the area since WaHu was opened. Currently, more than half of the retail space — nearly 13,000 square feet — underneath WaHu remains unfilled as vacancy rates rise in the Twin Cities area.

WaHu is competing with a multitudeof other vacant spots available in Minneapolis, making it harder to fill the ones available at the apartment complex, said Kristina Vagen, vice president at Michaels Organization, which oversees several housing developments across the nation.

Vagen, who works with WaHu and other housing complexes near the University of Minnesota like the Radius and 700 Washington, said neighboring restaurants in Stadium Village pose another challenge to filling WaHu’s vacancies.

A report on the retail market in the Minneapolis and St. Paul area published by Colliers International earlier this year found that vacancy rates have increased from 4.4 percent in 2015 to 6.1 percent in 2017.

The report shows a Twin Cities trend for retail markets moving away from sit down restaurants towards more “fast-casual” restaurants.

Fast-casual is a type of restaurant, like other Stadium Village eateries Blaze Pizza and Sprout, that offers a higher quality of food than fast-food places but doesn’t offer full table service.

Vagen said Stadium Village already offers many of these options, making it difficult for WaHu to find prospective clients.

Even though the retail spaces remain unfilled, the number of sites currently offered is the right amount for a multi-family complex like WaHu, Vagen said.

Still, Vagen said WaHu is a prime location for businesses since it is in heavy commercial area and is accessible to both students and non-students, with the freeway and Metro Light Rail close by.

Tiffiny and Hoang Do, co-owners of Bambu, said they decided to open in WaHu for similar reasons.

Tiffiny Do said they looked at opening in Dinkytown but decided that WaHu offered better foot traffic, more parking options for customers and was closer to the freeway and light rail.

“It’s very limited to find any kind of free parking or public at the [University] … and WaHu [gives] us free ample parking for customers,” Tiffiny Do said.

Despite WaHu’s inability to fill the spaces, Vagen said management is still trying.

“It’s been a challenge. We’re not even all filled up yet and we’ve been open for two years,” she said.