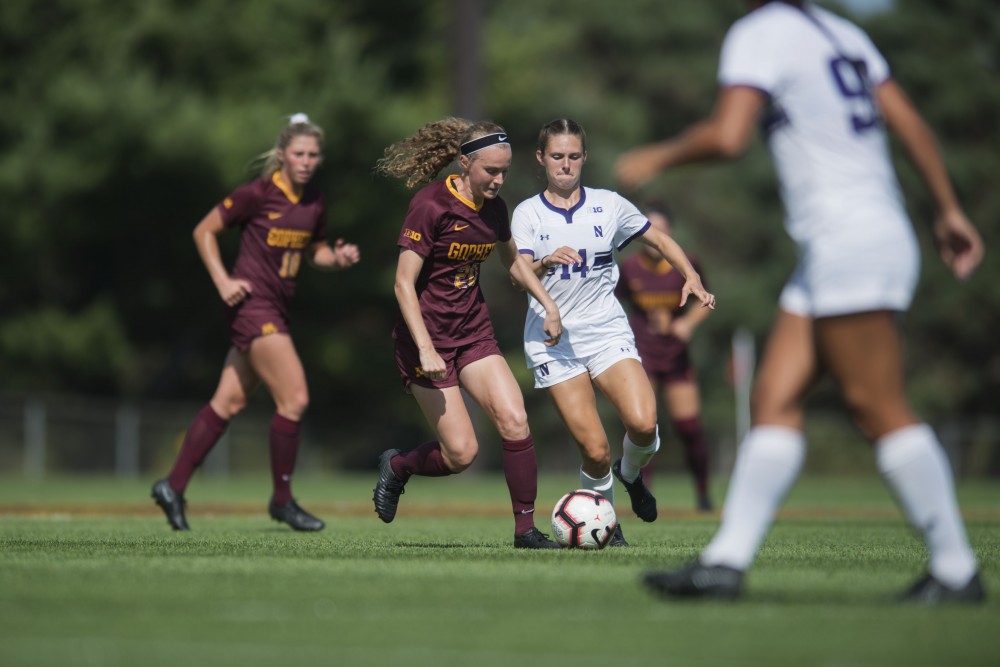 With only a few minutes remaining in the second overtime in the match against Michigan on Sunday, Minnesota was headed for another scoreless draw. Seconds later, the Gophers celebrated on the field.

Bockin said she knew where she was going to shoot the ball when Fiedler passed it to her.

“If I have a breakaway, I usually pick the corners [of the net],” Bockin said. “I was tired, so I didn’t have as much control over where I hit it, but it ended up in the back of the net.”

It was Minnesota’s first win against Michigan since Sept. 29, 2013.

Assistant coach Becky Fletcher said she was proud of Minnesota’s effort on Sunday. It was Minnesota’s first win against Michigan since Sept. 29, 2013.

“They fought in another overtime game,” Fletcher said. “Two overtime games is tough to play back-to-back. They kept running hard and fighting for each other and came out with the win.”

Goalkeeper Maddie Nielsen earned the shutout and won her sixth match of the season. Nielsen made four saves and has not allowed a goal in three straight matches.

Nielsen said she has focused more on stopping the first shot of each half.

“Every half, I go in and say, ‘Take it one shot at a time,'” Nielsen said. “That has given me a lot more confidence.”

Minnesota is now 3-0-1 in road matches this season. Nielsen said Minnesota plays its style of soccer in order to be successful away from home.

“Road wins are more difficult because you’re in the opponent’s home atmosphere,” she said. “Being somewhere else shouldn’t affect how we play.”

This time, defense highlighted Friday’s match in East Lansing, Michigan, as it ended in a 0-0 draw. It was Minnesota’s first draw since Sept. 22, 2017, when the Gophers tied Michigan 2-2.

Nielsen made two saves and her Michigan State counterpart, Reilley Ott, made four.

“[Nielsen] came out with some big saves today, which is great for her own confidence,” defender Nikki Albrecht said. “We were stable and strong against their idea of trying to lump balls over to their top forward.”

Bockin, forward, had three shots on-goal and midfielder Emily Heslin had one. The Gophers did not allow any shots on-goal to Michigan State in either overtime period.

Defender Athena Kuehn said Minnesota plays the strongest near the end of each half.

“We build momentum,” Kuehn said. “We had our most chances at the end of first half and near the end of the game. In overtime, we were pushing a lot for that goal.”