Girls in Action, a program created in Minneapolis that supports female students of color, could get state funding to expand. 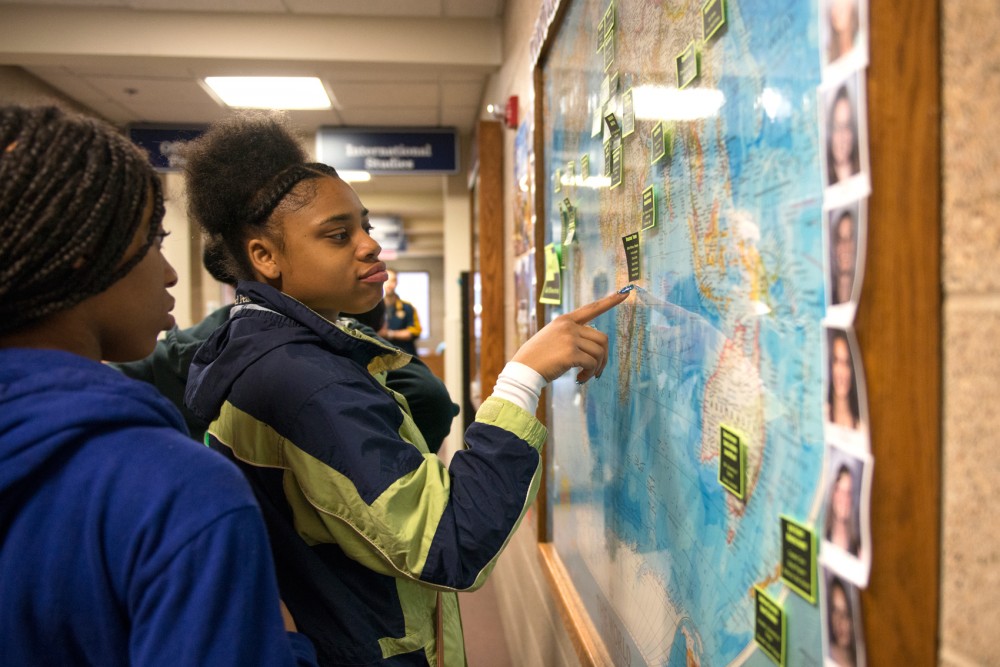 High school sophomore Sakhila Islam points to a country on a map of study abroad opportunities during a tour at Bethel University on Tuesday. Islam, who hopes to study theater in college and study abroad in Puerto Rico, is a part of Girls in Action, a program aimed at mentoring high school girls and leading them in the direction of college and careers by giving them leadership skills and service opportunities.

Kevin Beckman
For Niara Keyes, a senior at Patrick Henry High School, cultivating self-confidence was as important as hitting the books  for her academic success.
For the past four years, Keyes has been one of thousands of female participants in Girls in Action, a program aimed at helping girls of color thrive in high school and extend that success to postsecondary education.
“Girls in Action has taught me how to advocate,” Keyes said. “I need to be able to voice my opinion and to be heard.”
Legislation introduced last month would allocate $1.6 million to expand the project to serve the entire seven-county metro area.
Nationwide, black girls are 14.6 percent less likely than white girls to graduate high school, according to U.S. Department of Education statistics. Hispanic girls are 12.8 percent less likely, and American Indian girls 16 percent less likely.
And Minnesota consistently ranks low for minority students’ academic performance, said Julie Sweitzer, the College Readiness Consortium executive director.
“As a whole, Minnesota students do well,” Sweitzer said. “But when you break out ethnic groups by state, our performance with students of color is not impressive, and the gaps between white students and students of color are large.”
The proposal’s proponents — among them Rep. Rena Moran, DFL-St. Paul, one of the bill’s co-authors — say expanding Girls in Action could help boost on-time graduation among Minnesota girls of color while reducing suspension rates.
“Our educational system cannot do this by [itself],” Moran said. “They need community partners to create successes for our young people.”
In the past two years, all of the Girls in Action students have graduated high school, said Dr. Verna Price, a University of Minnesota alumnus, who founded the program 11 years ago, said more than three-quarters of participants go on to college, and of those, about 80 percent graduate.
Since its 2005 inception, the program has served more than 3,000 junior and senior school girls, mostly from Minneapolis and St. Paul. In the past five years, schools in Fridley, Robbinsdale and Chaska have also joined the mix.
“The funding allows us to offer these programs to schools that need them and want them,” she said. “The fact is that [the school districts] really don’t have any dollars to pay for them.”
Fostering mentors
One key to Girls in Action’s success is that it connects girls of color with mentors that are female community leaders and who often share the same ethnicity.
“It’s really important to girls to see themselves in other women,” Price said.
Former Minneapolis City Council member Natalie Johnson Lee said she has worked with approximately 500 to 600 students  since she joined Girls in Action.
Price said the program not only supports participants from sixth grade until graduation, it also continues mentorship into college.
“It’s continuous,” Price said. “Sometimes [the girls] need to be convinced that they’re worthy of college.”
Sweitzer said the state’s graduation rate gap can be attributed to factors outside of school — such as health, housing, poverty and childhood trauma — as well as in-school factors like lack of cultural competency or teacher proficiency.
Price said some of the girls in the program have families that are unemployed and rely on social services. To get them exposed to professional work environments and post-secondary education,  the program organizes college and company tours for students, Price said.
“[They] haven’t seen a regimented structure or what does it really means to actually go to work and have that structure,” she said. “I work really hard to expose the girls … to as many careers as possible.”
Each girl in the program is also required to give back to their community through service learning and to work with career coaches to plan their professional goals and develop a written career plan.
Lee, who was also one of the program’s first funders, said she stresses to girls the long-term benefits of building themselves up on a daily basis by showing up to school on time and working hard to get good grades.
“The program is about helping the girls realize that there’s more to life than just this day and even just this year,” Lee said. “We help them understand that there’s a much bigger world out there and much more opportunities.”
Delete Image
Align Left
Align Center
Align Right
Align Left
Align Center
Delete Heading