Weber finally has his day 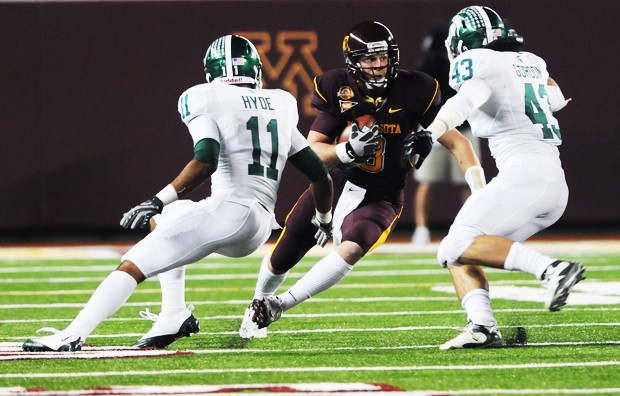 It was Sunday or Monday âÄî heâÄôs not quite sure. Junior quarterback Adam Weber had two demoralizing road losses fresh in his mind, one to Penn State and one to Ohio State. In those two games he had a combined 213 yards, no touchdowns and three picks. By his own admittance, he was frustrated. But it was back to work for Weber. Michigan State was next. The Spartans had allowed 15 points or less in their past three games. It was going to be another tough test. Time to study film. A trend emerged quickly. On play action passes, Michigan StateâÄôs defense tended to lose track of the running back and the Gophers drew up a play to exploit the weakness âÄî MinnesotaâÄôs first from scrimmage. Weber just hoped the Spartans lined up in the defense he had seen on film. They did. Weber faked the handoff to sophomore running back Duane Bennett and rolled right. Sure enough, Michigan State shifted that way. Bennett slipped uncovered to the weak side; Weber stopped and heaved the ball across the field to his wide open back. Bennett was hit as he raced down the sideline but somehow kept his balance and kept himself in bounds, tiptoeing his way to a 62-yard touchdown just 20 seconds into the game. And just like that, WeberâÄôs redemption was on. Frustration? Ancient history. Behind the best protection heâÄôs seen this season, he spread the ball to six different receivers, completed 19-of-31 passes for a career-high 416 yards and tied a career high with five touchdown passes in a 42-34 win Saturday night at TCF Bank Stadium. âÄúItâÄôs an amazing thing back there,âÄù Weber said of the time in the pocket he was given by the offensive line. âÄúAnytime you can go back there and kind of go through three receivers and back down to a check-down, youâÄôre going to move the ball and execute.âÄù Execution had eluded Weber and the Gophers offense for a couple weeks. No points against Penn State; seven against Ohio State âÄî and the one touchdown was thrown by freshman quarterback MarQueis Gray against the second string defense. Questions began to fly. They came in two basic forms: Has Weber regressed? Should Gray be starting? All the while, head coach Tim Brewster stuck by his third-year starter. Adam Weber is our quarterback, he repeated time and again. Brewster kept saying Weber was due for a big game, and he was right. WeberâÄôs teammates also say they knew it was only a matter of time. âÄúI wouldnâÄôt necessarily say it was a surprise to us,âÄù Bennett said Saturday, shortly after the final gun. âÄúWe know that heâÄôs capable of doing it on any day.âÄù Everyone on the field got a piece of the action. Senior tight end Nick Tow-Arnett caught his first two touchdown passes of the season. Bennett caught a pair as well. Sophomore receiver Brandon Green had just two receptions, but one was a 37-yard touchdown over a Michigan State defensive back in the corner of the end zone. Another sophomore, DaâÄôjon McKnight, got his first start of the season and racked up 98 yards. Of course, everyone knows whoâÄôs missing from that list. That Weber had a career day without his best receiver, favorite target and close friend makes his performance all the more remarkable. âÄúThatâÄôs really special,âÄù Brewster said. âÄúTo lose the best wide receiver in college football and see the efforts of those young guys stepping up and playing.âÄù Then there were the breaks. In a shootout like SaturdayâÄôs game, it usually comes down to which team gets the odd bounce. WeberâÄôs final completion âÄî the one that made him the first Minnesota player to pass for 400 yards since Cory Sauter did against the Spartans in 1995 âÄî reads on the stat sheet as 59 yards to Bennett. ThatâÄôs about a quarter of the story. It should say, Weber to Tow-ArnettâÄôs hands to Tow-ArnettâÄôs elbow (as he was lying on the ground) to BennettâÄôs hands. Three Michigan State defenders were within an armâÄôs length of Bennett when he caught the ball, but all three thought the play was over and stopped while Bennett raced to the end zone. And keep in mind the play before was ruled an incompletion on review when maybe âÄî just maybe âÄî Tow-Arnett had possession before the ball was knocked from his hands. As Weber sees it, a game in which everything went right for the Gophers was a long time coming. âÄúSo many times the ball has been bouncing the other way for us,âÄù he said. âÄúIt was just great that finally in a big game the ball bounced our way and we were able to come up with a big play that clinched the game.âÄù