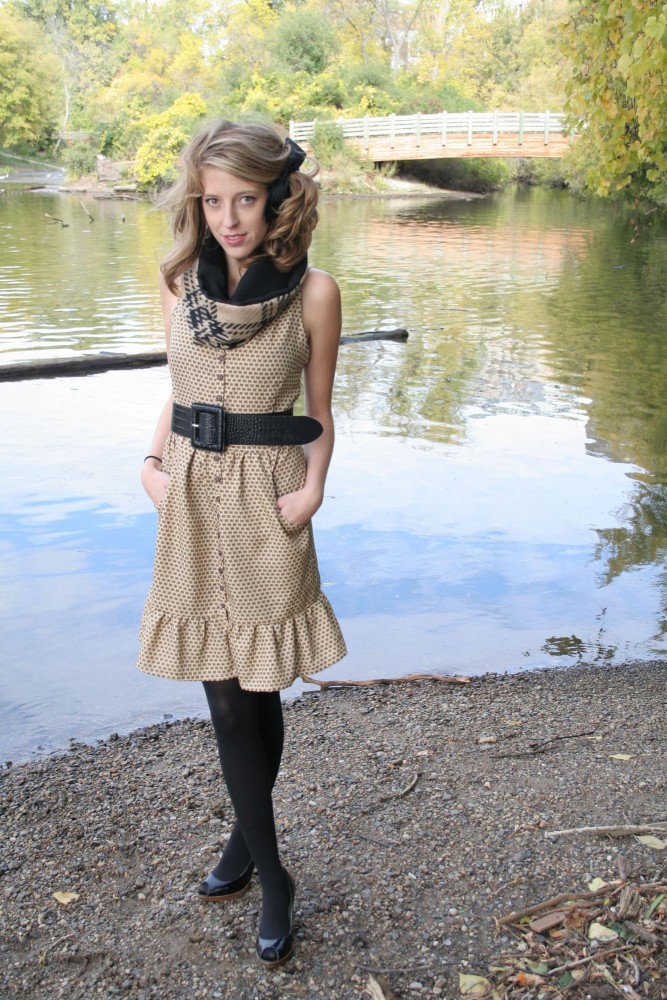 Each year, talented designers are busy stitching and draping away over at the St. Paul campus. Sometimes, all that hard work gets them noticed in a big way âÄî take senior Emily Bryngelson , whose breezy, girly line of dresses and separates, called Tender Cuts, has recently been picked up by Lyndale boutique ClichÃ©. Bryngelson chatted with A&E about her lineâÄôs intriguing moniker and its origins as well as her jaunts as a Twin Cities model. WhatâÄôs your background in design? Were you a seamstress as a little girl? I think thatâÄôs the only thing IâÄôve ever been interested in. I canâÄôt remember ever wanting to do anything else. I pretty much taught myself. I had a few classes in high school but I really did just make clothes and thatâÄôs how I learned. What was the first piece you made? It was probably a dress. I attempted to make dresses when I was younger but none really worked out [laughs]. Can you tell me a little bit about your design aesthetic pre- and post-Tender Cuts? ItâÄôs a cross between sweet and edgy. I use a lot of casual fabrics; I donâÄôt really work with silks or anything like that. What inspires you? A lot of stuff inspires me. It usually starts with people. For instance, my spring collection one is inspired by London. I have another collection IâÄôm trying to do for April thatâÄôs going to be inspired by bugs. ItâÄôs kind of weird, but IâÄôm trying to take it into an awesome direction; to turn fearful into inspirational. WhatâÄôs your design process? It starts with my inspiration, then I go back and try to find things that connect. I just sketch like crazy âÄ¦ then I start draping stuff. Where did the name Tender Cuts come from? I was trying to think of a name that would describe my style but be a little âÄúoffâÄù at first, so youâÄôd have to think about it. The first thing I thought of was meat, but if I have this awesome logo with it, then itâÄôs clever. How long have you been selling Tender Cuts at ClichÃ©? I started [working] there in May [as an intern]. I got my clothes in probably two months ago. I love it there! I love [owners] Josh and Delayna and all the other designers there are really great. I got to work with them a lot and that showed me how much fun it is to be a designer at ClichÃ© and in Minneapolis. How do you feel about the local scene? Who are your favorite designers? When I first moved to Minneapolis, I really loved Annie Larson; thatâÄôs the kind of style that I like. I also love Max Lohrbach. He has awesome ideas; they have crazy stories behind them. I was a part of Voltage for a few years as a model âÄî I love Voltage, but I think this year IâÄôm going to try to do my own show in April. IâÄôm starting to plan it right now with a couple girls. IâÄôve been talking to Kathryn Sterner and a couple other girls at ClichÃ© like Niki English and Amanda Chaffin. WeâÄôre trying to put together something cool. How about worldwide fashion designers? I have been definitely loving a lot of London designers lately like Topshop Unique and Luella Bartley. What are your plans post-graduation in May? Hopefully by then IâÄôll have my name out there. IâÄôm going to stay in Minneapolis for a year or two and work out my style, then eventually get a job overseas or in New York and work there. You said you modeled for Voltage. Are you still doing it? I do for my friends. I think in the past I was a model because I wanted to be in the fashion industry. I loved being a part of it. [The first year, Bryngelson modeled for RaâÄômon-Lawrence Coleman and in other years, she walked for Larson and Lorhbach, among others]. I didnâÄôt really have an education then, but now that I do IâÄôm all about the design aspect of it. I want to be the designer and have the models wear my stuff.