After several stints of not competing, Lizak sets mind on national title 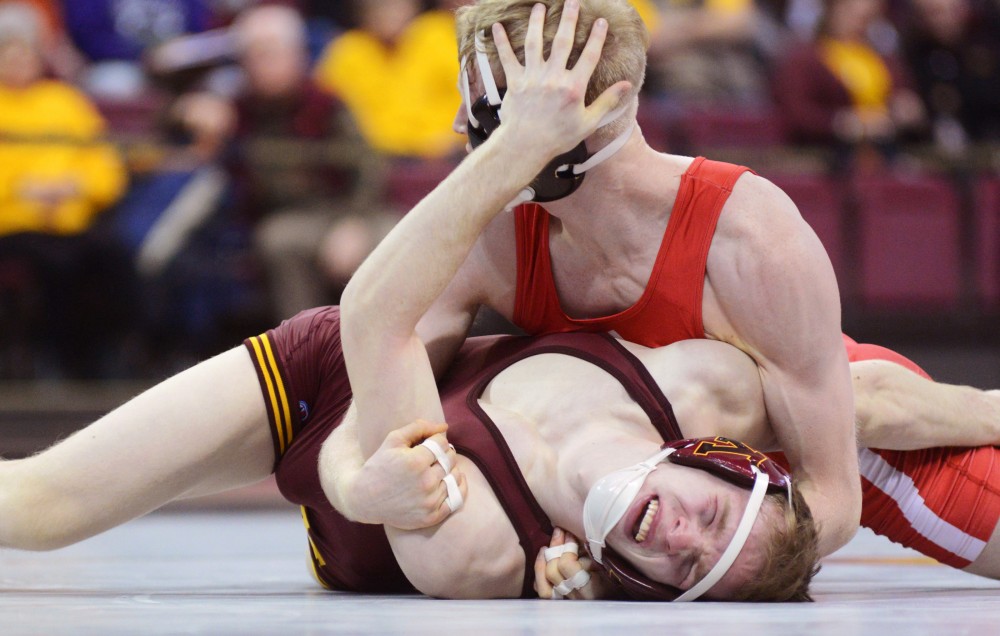 At the Scottrade center in St. Louis, Missouri, Division I wrestlers accomplished goals they’ve dreamed about so much, only Ethan Lizak didn’t have the storybook ending he wanted.

The 125-pounder lost to Lehigh junior Darian Cruz in the 125-pound national championship on March 18. Fast forward to today, and the Gopher wrestler is No. 5 in the nation and ready to finish the job and win a national title.

Lizak joined the Gophers for the 2014-15 season. He posted a 28-15 overall record with three pins, seven major decisions and four technical falls. The following year, Lizak was redshirted. He said he used that year to prepare himself for his future seasons.

The following season, Lizak had to sit out once again, but for a different reason.

He, along with three other wrestlers, served a suspension that prevented him from competing until Jan. 1 of that year. In an interview with the Minnesota Daily, Brandon Krone, another wrestler suspended at the same time, said the suspension stemmed from violating the school’s conduct code.

Members of the team were allegedly involved in a drug ring prior to the wrestlers being suspended, but there has not been a connection cited between the suspensions and the allegations regarding the ring. A spokesperson for the wrestling team declined to comment on Lizak’s suspension.

For Lizak’s performance on the mat, sitting out paid off. He came back to competition and posted a 30-7 overall record. He became an NCAA finalist in the 125-pound weight class and had four pins, eight major decisions and 10 technical falls that year. Now, he looks to go further.

“When I look at him as an athlete, I can see the problems that he can create for opponents, which is a real blessing and a positive thing for our program,” said head coach Brandon Eggum. “He’s really a difficult guy to compete against or have a game plan for, because when things go wrong it can result in a lot of points for Ethan or even a fall.”

Since the night he lost the national title, Lizak has worked hard to prepare for this season. Among the things he has switched up are his attacking style and his diet. Eating healthier has made a difference for him already.

He said he’s had more energy and felt quicker because of it. Lizak said he needs to be more aggressive on his feet and not let his opponents dictate the match.

“Overall, I think he had a really dominating performance when you look at it in terms of point scored,” Eggum said.

A strong showing at the Daktronics Open was a good way for Lizak to get back into things. He said he has to build on the momentum as the season goes on and did just that this past Sunday, in the team’s home opening dual against Air Force. Lizak won a 5-2 decision at 125 and earned the Gophers three team points.

“I’m trying to dominate every match and [am] ultimately looking for that national title,” said Lizak.

Lizak is next in action when the Gophers wrestle South Dakota State in Brookings, South Dakota on Friday, Nov. 17.