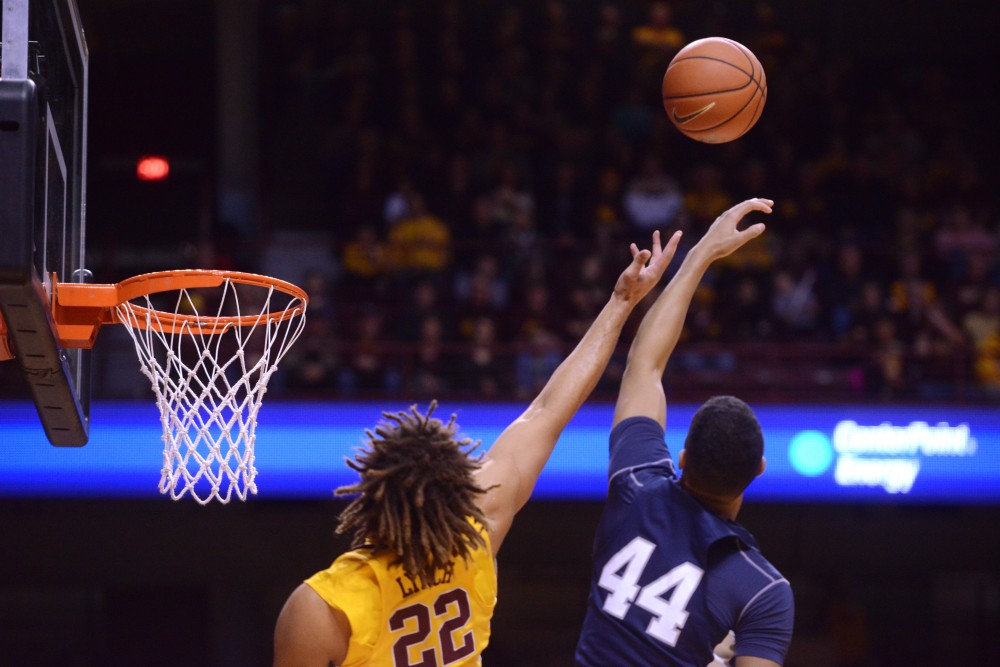 Center Reggie Lynch went to the Gophers bench with 29.6 seconds left in the game as the sellout crowd at Williams Arena chanted his name.

Lynch had 11 blocks and nine points in 29 minutes as Minnesota defeated Penn State 81-71.

The Gophers improved their offensive game since the team lost to Penn State earlier in the year.

Lynch went the entire game without recording a single foul. He shot 40 percent from the field.

“Honestly, the zero fouls is more impressive,” Lynch said. “I know I can get 11 blocks.”

Four Gophers scored over 15 points against the Nittany Lions.

Guard Dupree McBrayer got a pass on the baseline and drove to the rim midway through the second half. He finished an acrobatic dunk with both hands as the crowd roared in approval. He led the team in scoring off the bench with 15 points.

Minnesota shot 44.6 percent from the field this game compared to a 37.7 percent performance in the last matchup.

Guard Nate Mason had 16 points, 10 boards and eight assists in the winning effort.

Mason also hit 4-8 shots from beyond the arc.

Power forward Jordan Murphy had a double-double of his own with 16 points and 16 rebounds.

Murphy said the team has a lot of good pieces.

“I think the sky is the limit with this team honestly,” Murphy said. “We’re a really deep, really versatile team.”

Murphy shifted the momentum early in the game when he delivered a no-look pass to guard Akeem Springs under the basket. Springs laid it in and Minnesota led 10-5.

Springs finished with 12 points. However, he struggled from beyond the arc, shooting just 2-7 from the three-point zone.

Mason had a no-look pass of his own when he found Murphy under the rim for an easy two points as the Gophers led 22-18 midway through the first half.

Penn State’s Tony Carr had a game-high 20 points in the game. Carr led all Nittany Lions in assists with seven.

The Nittany Lions switched to trap defense in the second half. Penn State beat Minnesota in the turnover battle 10-5.

Mason found Murphy under the rim on a bounce pass. Murphy had trouble handling the pass, but he finished the play with a dunk as Minnesota took an 80-67 lead with 1:44 to go.

Penn State out-rebounded Minnesota in the two teams’ previous matchup. The Gophers beat the Nittany Lions in the rebounding battle 49-40 this time around.

“I think, offensively, why we were pretty good is that we were rebounding the ball,” Pitino said.

Minnesota plays its final home game of the season this Thursday against Nebraska (12-15, 6-9 Big Ten).

“[The] guys are playing with great confidence,” Pitino said. “I told our guys after the game, ‘you earned every person that came back and filled up that arena.’”