The U is paying people willing to help clean the stadium before the Gophers’ Saturday game. 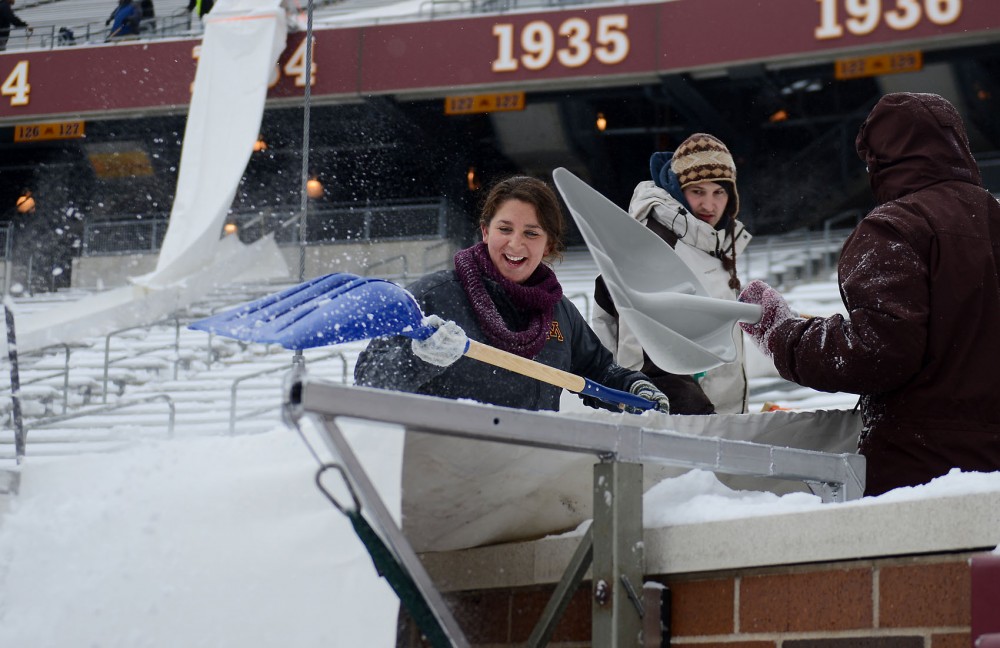 Grad students Cassie Drozynski, left, and Teresa Logemann shovel and remove snow from the stands and onto the field at TCF Bank Stadium on Wednesday afternoon.

Officials say they need help removing snow from TCF Bank Stadium before the University of Minnesota’s Saturday football game — and they’re willing to pay anyone who pitches in.

The University announced Wednesday that it will pay $10 an hour for help shoveling the stadium before the Gophers face Ohio State. About 100 people showed up for the first shift on Wednesday afternoon, said Associate Athletics Director of Facilities Scott Ellison.

Ellison said officials are aiming for another 30 to 50 people per shift but he welcomes any help.

“We’re a little short on shovelers,” he said.

This is the third major snow removal at the stadium, Ellison said. The first came in 2010 when the Metrodome’s collapse forced the Minnesota Vikings game onto campus, and crews had to yank snow out again for last year’s Hockey City Classic.

Officials have the removal process nailed down but still “need the bodies to do it,” Ellison said.

Lured by the promise of pay, a few University students headed to the stadium Wednesday to help out.

“It’s a really easy way to earn some extra money,” she said. “It’s been awesome.”

Teresa Logemann, another sports management graduate student, said her experience shoveling was nothing but positive.

Both students said the money played a big factor, but they also felt an obligation to help out.

This round of snow removal will cost about $30,000, Ellison said. Over the entire week, he said crews expect to use about 40,000 man hours on the project.

Ellison said the heated football field worked better than expected, melting virtually all of the snow that fell onto the actual field, but there was still a significant amount of work needed to clear the stands.

Though only about 3 inches fell this week, Ellison said snow drifts were problematic.

“We might have 2 inches on one end of the stadium and 10 inches on the other,” he said.

Ellison said he hopes student groups will assist in the snow removal. The University’s Reserve Officers’ Training Corps has already committed to working on the project. But unlike the rest of the workers, they will be paid in what Ellison said amounts to a donation to ROTC.

Ellison said the game will go on if it snows on Saturday, and his crew will make the seats accessible in that scenario.

Potential workers can contact temporary employment agencies Northland Temporaries or Labor Ready to pre-apply before the shifts begin. Or they can show up at the stadium’s Lincoln County entrance at either 12:30 p.m. or 5:30 p.m. Thursday or at 7:30 a.m. or 12:30 p.m. Friday to complete paperwork before starting. Workers must bring two forms of ID to apply.