The University will hold an open house to celebrate its welcoming LGBT culture. 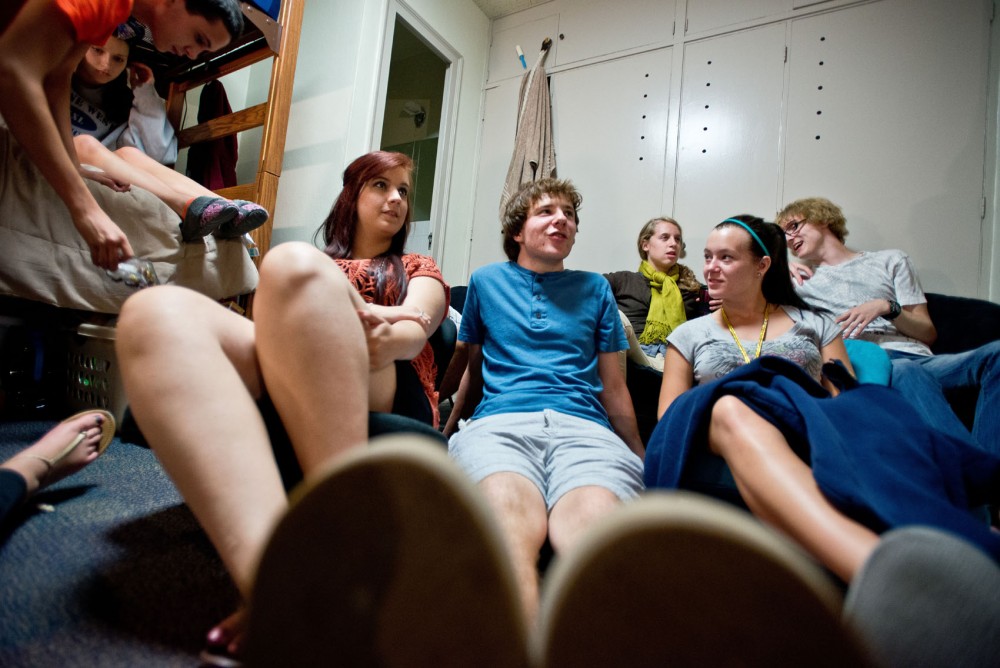 Maggie Houghton, Austin Zyvoloski and Rachel Blair relax to watch the Video Music Awards after a long day of classes Thursday in Comstock Hall. Lavender House, a GLBTA living-learning community, is one of several reasons that the University is considered a safe place for LGBT students.

He said he was “in the closet mentally” until his freshman year at the University of Minnesota, where he found the cultural climate very different.

The University was ranked among the top-25 most Lesbian, Gay, Bisexual, Transgender-friendly colleges in the country, according to Campus Pride, a nonprofit dedicated to creating safer environments for LGBT students. The ranking is based on eight factors including LGBT policy inclusion, counseling and housing options.

The Gay, Lesbian, Bisexual, Transgender, Ally Programs Office in the University’s Office for Equity and Diversity is planning an open house which will take place at Appleby Hall on Oct. 1 and 2.

“I’m not spilling any secrets yet,” said Jason Jackson, who’s helping to plan the event as the assistant director of GLBTA programs. He’s one of three new staff members in the office, along with director Matthew Antonio Bosch and office manager Frankie Jader.

Jader, who has long identified as a member of the LGBT community, said she found the University to be “incredibly welcoming.”

Previously she worked as a diversity specialist at North Hennepin Community College, where she said she was one of only two staff members running a program spanning all diversity issues.

Both she and Jackson lauded the University program’s emphasis on intersectionality, or the study of the complex ways different sociological identities interact with one another.

LGBT programs seek to accommodate people at varying axes of identity by giving them safe spaces.

Jackson, who identifies as both gay and black, sought these spaces during his adolescent years.

Originally a student at Georgia State University, Jackson said he’d had no experience with in-school LGBT programs before coming to Minnesota.

He spent most of his teen life in Georgia, where he was harassed and ridiculed for his sexual orientation, he said.

Eventually he moved to New York , as he said many did, because of the LGBT culture there.

He said he felt accepted in New York but decided after several years that he had to move on. He had family in Minneapolis, so he decided to move to the Twin Cities, where he worked to strengthen LGBT communities of color.

The University’s GLBTA program offered Jackson a position, which he said allowed him to establish spaces for people who, like him, were in the ethnic and sexual minority.

“There’s a lot of queer stuff going on [at the University],” Jackson said.

Not everyone who identifies as LGBT is active in the LGBT community.

Some students find acceptance without even considering involvement with the GLBTA Programs Office.

It never occurred to Lambert, a junior at the University, to join in any LGBT program though he is gay.

Coming from a small town in southeastern Minnesota, Lambert grew up surrounded by the use of offhand sexual slurs.

Now his sexuality is a large part of who he is, Lambert said, and he feels welcome on campus.