Students protesting peacefully were met by police while marching to different locations on campus from Northrop Plaza. 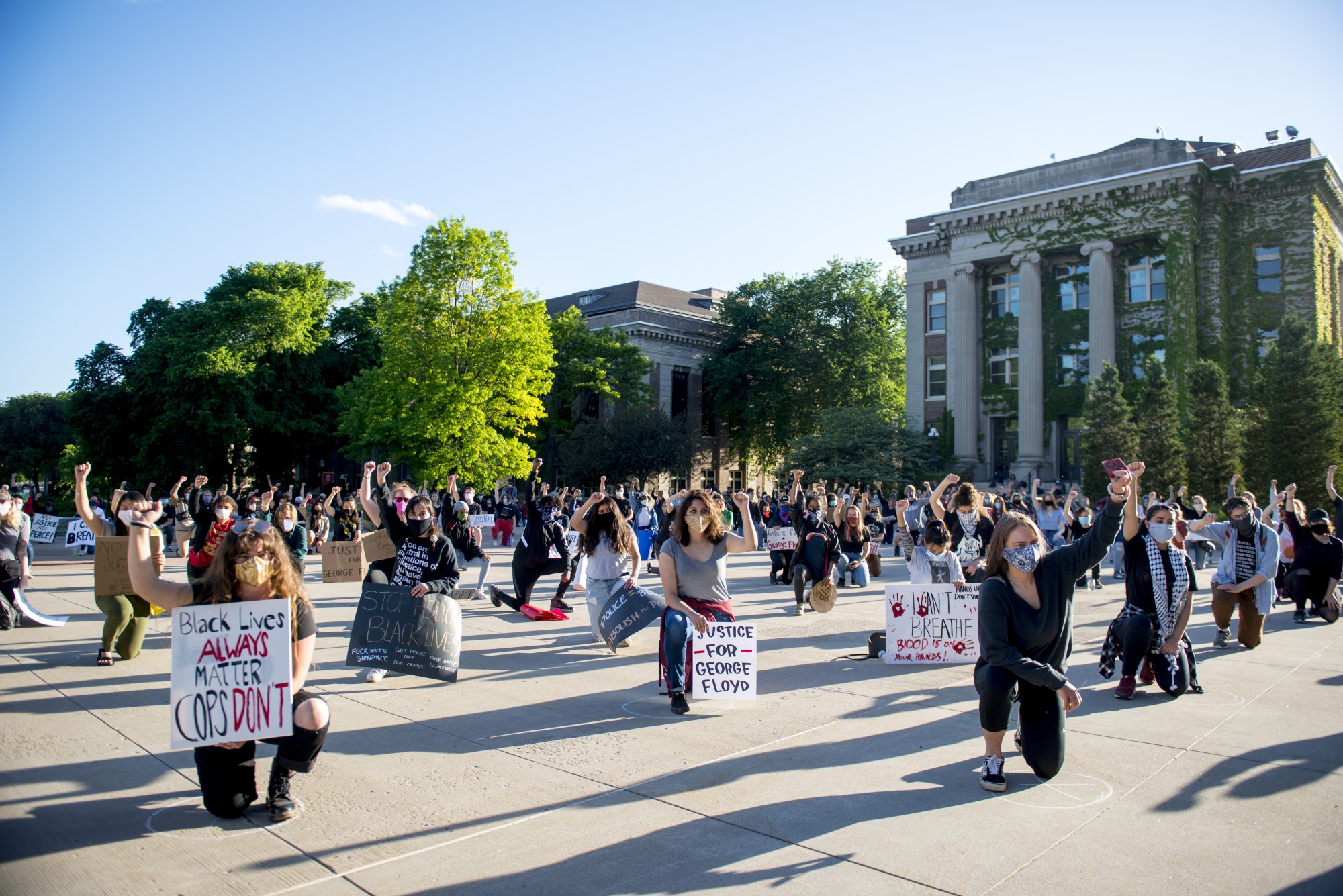 Student demonstrators gather outside of Northrup Auditorium on Friday, May 29 to protest the killing of George Floyd and the Minneapolis Police Department. Chalk marks were drawn 6-feet apart to help the crowd with social distancing.

Several hundred University of Minnesota students gathered for an on-campus anti-police rally Friday evening. The demonstration, consistent with the overall message of some hosting groups, was also part of the protests following the killing of George Floyd.

The “Get Police Off Our Campus” rally was hosted by several student groups, including the Students for a Democratic Society, the Black Student Union, the Muslim Students Association and the UMN Climate Strike, among others.

Roughly 200 individuals gathered in front of Northrop Auditorium. The atmosphere was peaceful and quiet as protesters listened to various student speakers addressing the crowd through a megaphone on the auditorium steps.

Muslim Students Association president Abdimalik Ahmed said that even with the changed relationship between the University of Minnesota Police Department and Minneapolis Police Department, more is still to be done. “We are completely outraged,” Ahmed said. “We also need to come forward as a student body and protest the police brutality and white supremacy that is gripping police stations around the country and the police station on our own campus.”

Along with protesting the violent nature of Floyd’s death, three primary demands were presented at the rally: the minimization of police presence on campus, the establishment of an accountability council that would be empowered to make decisions regarding UMPD, such as budget, hiring, firing and misconduct issues, and the disarming and defunding of the department.

The demonstration was planned with social distancing etiquette taken into consideration. Organizers urged attendees to wear masks and gloves when able with social media mandates and marshals present at the rally, which attendees largely did. Chalk markings on the ground helped protesters maintain six-foot distances between one another.

Jael Kerandi, Minnesota Student Association president who released the statement demanding that President Joan Gabel cut ties with UMPD, was one of over a dozen speakers at the event. During her speech, she asked the group to take a moment of silence to honor Floyd.

“Let that be the last time you are silent about this,” Kerandi said. Following the rally, demonstrators moved to the University Police Department on Washington Avenue, where they protested outside for around 15 minutes before organizers reminded everyone of the new 8 p.m. city curfew.

But as demonstrators began to disperse to the next protest on 4th Street, dozens of UMPD officers arrived to form a line across Harvard and Union Street. All appeared to carry some form of weapon, and several had guns.

The officers were met with shock and outrage. Some began to shout at the officers, despite protest organizers attempting to maintain the calm. Others opted to take photos with their signs in front of the police line.

“Why are you here? What were we doing wrong?” one protester asked. By 7:45 p.m., Students for a Democratic Society organizers began to step in in an attempt to stop those still left at the police department. While UMPD could not arrest them for yelling now, they could in 15 minutes, one organizer said.

But despite the curfew, more than 50 people still showed up to the next demonstration — blocking the intersection of 4th Street SE and 15th Avenue SE. Outside of the Dinkytown McDonalds, volunteers set up a small supply station with water, food and milk. Sharpies were passed around so everyone could write the number of the Minnesota Freedom Fund — a community nonprofit that routinely pays bond for demonstrators — on their arm in case of arrest.

For the next hour and a half, the group stood firm across 4th Street, despite several cars and a motorcycle trying to break through the crowd. The majority of passersby were supportive — honks and cheers came from almost every car.

The demonstrators began their march down 4th Street to meet with others on I-35W. Students merged with hundreds of protesters, who stood in lines across the highway and disrupting traffic before leaving to march towards MPD’s Fifth Precinct. In the distance, onlookers were watching the protest-turned blockade below from above the Washington Ave S bridge. Fourth-year student Noah Carpenter and his friend watched as the protest grew in size, forcing cars and trucks to turn around in the opposite direction.

Carpenter said he and his friend had showed up in support of the protests, undeterred by the curfew. He said what he was seeing in the recent police actions was wrong, including the recent charges and the other officers in question.

Even though the protests do not affect him personally as a white person, he said that standing up for what is right is the responsible thing to do, even if that means only showing up in support.

“You have to do something to try to make it right in any way that you can,” Carpenter said.