The women's tennis team went 3-0 on the weekend. 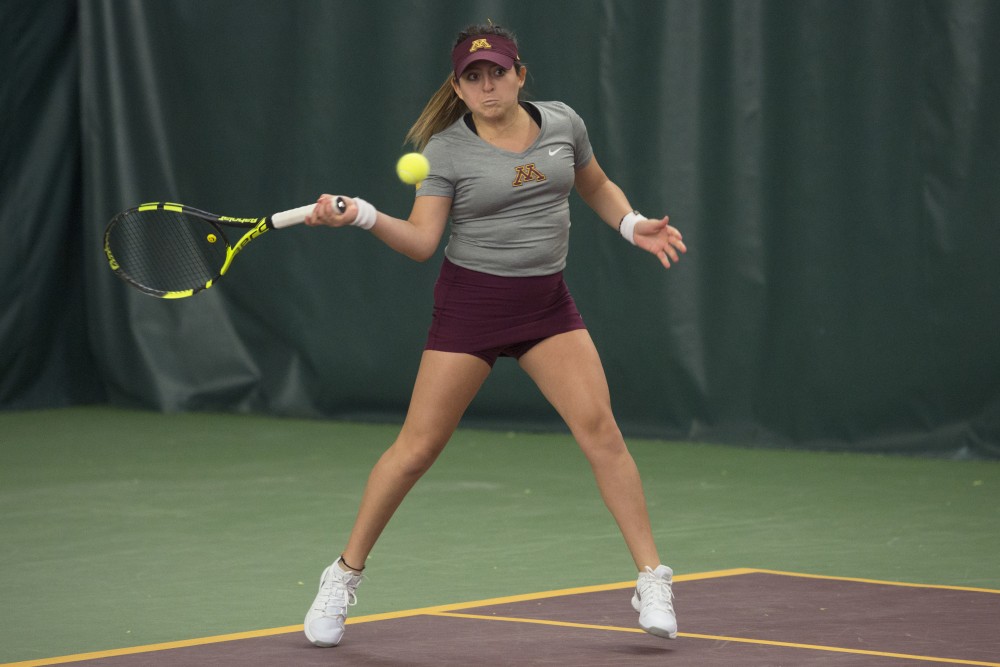 Junior Camila Vargas Gomez returns the ball during her singles match at the Baseline Tennis Center on Friday, Jan. 26.

She left the weekend with three victories.

Minnesota (3-0) played three dual matches on Friday and Saturday at the Baseline Tennis Center. The Gophers took down Northern Iowa, Sacramento State and South Dakota State in their first dual matches of the spring season.

“It felt pretty special to get that first victory,” Thompson said. “To get it 7-0 with all the girls doing well, it was pretty cool.”

On Friday night, the Gophers beat Northern Iowa (0-1) 7-0. In singles competition, Barbara Mancera won 6-1, 6-2 playing in the No. 3 singles spot. Quick to follow her was Camila Vargas Gomez, who beat Valentina Caro 6-1, 6-0. The clinching win for the Gophers came from Tina Kreinis out of the No. 2 singles spot. She took care of Reghan Lynch 6-1, 6-2 to give head coach Thompson her first victory.

Frei won the first singles match of the day out of the No. 6 singles spot, beating her opponent 6-4, 6-2 to get the second point for the Gophers. Merzbacher quickly followed with a win over her opponent 6-2, 6-3. Mancera, with a straight set win of 6-3, 6-3, clinched the dual against Sacramento State.

“It feels good to be back on the court and getting the clinching point was even better,” Mancera said.

On Saturday night, the Gophers finished their busy weekend with a victory against South Dakota State (0-2) 7-0. For the third time on the weekend, the Gophers took the doubles point. The pairing of Mehvish Safdar and Caitlyn Merzbacher picked up a 6-1  victory. Then, Kalyssa Hall and Karyna Bihel clinched the doubles point with a 6-1 win.

In singles, Merzbacher won the first point — 6-0, 6-0. Ryba also beat her opponent without losing a set and Frei won her matchup 6-1, 6-1 to clinch the win. The rest of the Gophers were able to take care of their opponents in route to a sweep of the Jackrabbits.

The Gophers traveled to Texas to take part in the ITA Kick-Off tournament. The tournament consisted of four teams including No. 8 Texas, Notre Dame and Tennessee.

Minnesota (1-2) beat Tennessee (7-2) 4-3 after Eli Ogilvy won the final match of the day for the Gophers to seal their first victory.

Minnesota earned the doubles point for the second time this season after No. 26 Matic Spec and Felix Corwin defeated Preston Touliatos and Adam Walton of the Volunteers 7-6 (4). The Gophers won the clinching point from the pairing of Justyn Levin and Josip Krstanovic.

No. 35 Stefan Milicevic lost to No. 36 Stodder 6-4,  6-1 in singles play. Minnesota won two matches from the No. 2 and No. 3 spots on the team. Spec and Corwin both won their matches to set up Olgilvy’s game-winning performance. Olgilvy took down Nicaise Muamba in three sets 6-3, 5-7, 6-4.

“Being the last match on, it always feels good to get the clinching match,” Olgilvy said. “It came down to who was going to be more aggressive, I feel like I executed that well.”

Minnesota lost 4-1 to Notre Dame on Sunday with a birth at ITA Indoor Nationals on the line.

The Gophers dropped the doubles point for the first time this season. Each doubles match was close. Milicevic and Marino Alpeza lost their match 7-6. Levin and Krstanovic battled, but lost 6-4.

Spec beat Matt Gamble of Notre Dame 6-3, 6-1 for their lone point in singles.

“The loss hurts for a while, but after it is important for the guys to reflect and get better from it,” head coach Geoff Young said.