Colm and Jody Griffin have been the directors of Minnesota’s Volley Squad for eight years. 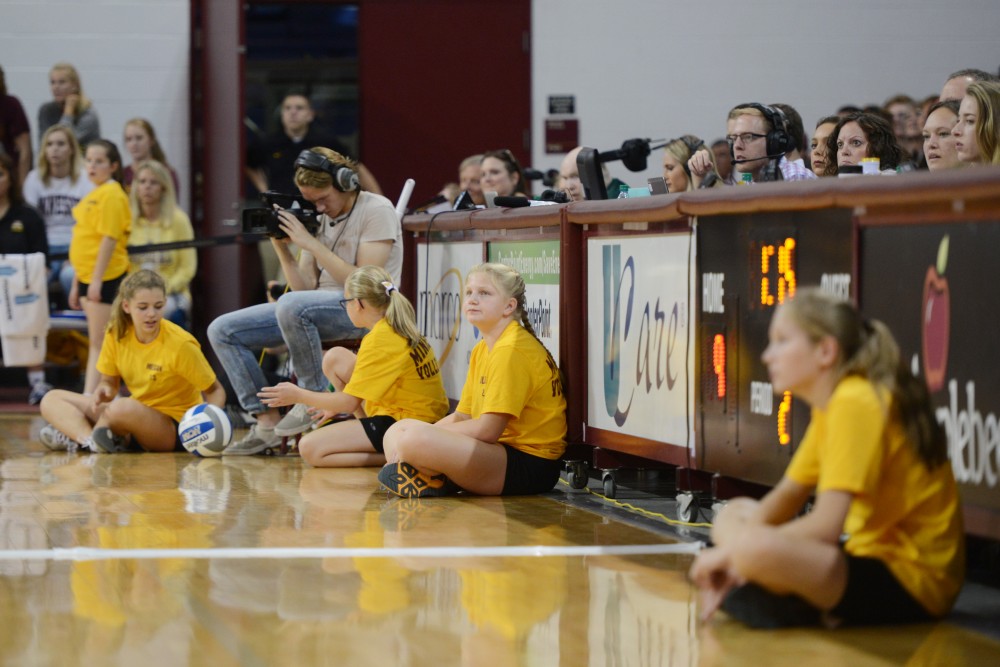 Minnesota Volley Squad girls sit on the side of the court on Friday, Sept. 23 in the Sports Pavillon.

There are plenty of staples in a Gophers volleyball home match, from the trademark “Point U!” exclamation after a successful Minnesota play to the fan prizes for service aces.

There’s also one more tradition close to the team’s heart that takes place right on the court – the Volley Squad.

The Minnesota Volley Squad, a group of 18 third- through eighth-grade girls at every home match, can be found bouncing balls to players, sweeping the floor or toweling damp areas of the court.

The directors of the program are husband and wife, Colm and Jody Griffin. The Griffins became involved eight years ago when their daughter, Caitlin, was in third grade. Jody’s sister, a friend of the former directors, called the Griffins and asked for Caitlin to come to a volleyball match to help out.

“My daughter was ecstatic,” said Colm Griffin. “She ended up doing four matches that year, and every match for the next three years.”

When the family that previously ran the program stepped down, Colm and Jody wanted to be more involved to ensure that the Volley Squad would continue.. The two have attended every match at the Sports Pavilion since, even after their daughter aged out of the program.

The Volley Squad is composed each year of kids from the Twin Cities area. Boys and girls can join a waiting list for the opportunity to join the Volley Squad.

Each of the 18 “Volley Squaders” are also paired with one of the 18 players on the team in a “big sister” program.

Volley Squad members have the opportunity to take the court and high-five or hug their big sister after each match, win or lose.

“For the kids to interact with the players, it means the world to them,” Colm Griffin said. “The players, bless their hearts, are excited to be with the kids too.”

The new members to the Volley Squad can be nervous for their new roles, but Colm Griffin said the jitters disappear once the girls get a match under their belts and start to connect with their “big sisters.”

The girls and their respective “big sisters” have relationships just like any real sisters do once the ice is broken. Colm said the Gophers players often joke with the girls and ask them about boyfriends, which they — like any little sister would — get defensive about.

The pairings give the Volley Squaders a role model to look up to, while the players get a happy release from the rigors of collegiate volleyball.

“It’s fun to have one who is there for you always, and gets excited to connect after the game with you,” said senior outside hitter Sarah Wilhite. “They do a great job and I’m happy to have them.”

The kids are offered a pizza party with the team at the end of the season, and they get to play on the court for a while — a well-deserved reward for their hard work throughout the season.

Even after Volley Squad members age out and players graduate, the relationships between big and little sisters can last. There is an end-of-the-year banquet that is open to the public, where former players and Volley Squaders can reunite and give their ceremonial post-game hug to each other.

Freshman outside hitter Alexis Hart was paired with a new member of the Volley Squad this season. Both rookies in their respective roles, they started off shyly, but their relationship has since grown.

“She was kind of shy, and I’m talkative. But after a while I think we got used to each other, and she’s just so sweet,” Hart said.