The Gophers had nine hits in the game but couldn’t manage timely hits. 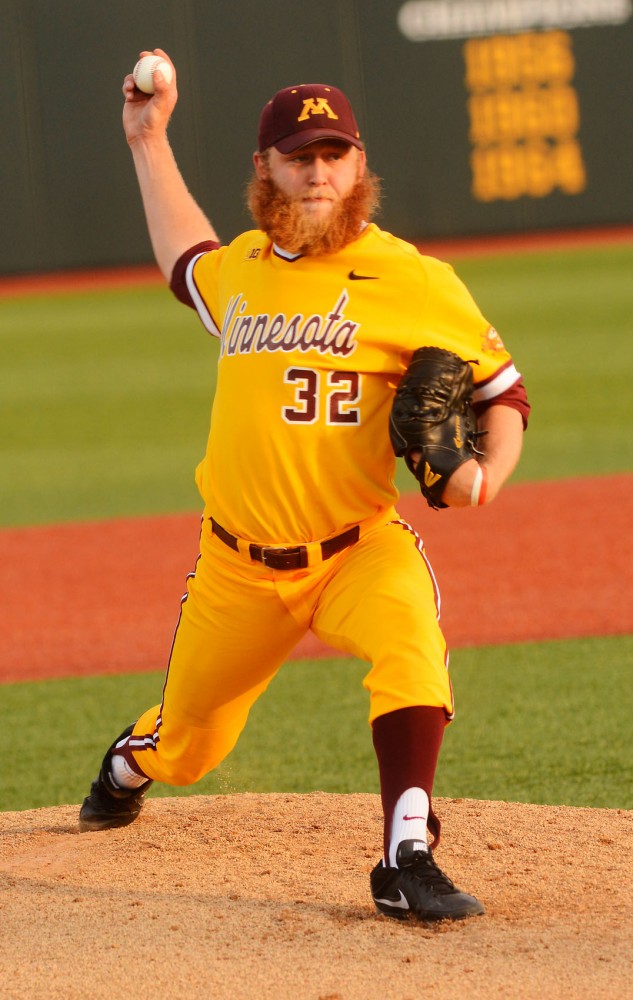 Pitcher Cody Campbell winds up to throw the ball during a game against Concordia College at Siebert Field on Wednesday.

A botched squeeze bunt or one too many pop-ups — timely hitting wasn’t Minnesota’s thing Wednesday night.

Minnesota thumped Augsburg 10-0 on Tuesday night, but Wednesday, the Gophers stranded 12 runners, including a pair in the bottom of the ninth
inning.

“You swing the bats good [Tuesday], and then everybody wants to come out tonight and hit the ball further,” head coach John Anderson said. “When guys were in scoring position, we had bad at-bats because guys tried to do too much.”

Gophers freshman catcher Austin Athmann was the only player that did much of anything at the dish. He drove in the team’s only two runs with an RBI single in the third inning. He also struggled to hit with runners on base, though, and stranded four runners, finishing the game 1-for-5.

Minnesota jack-of-all-trades junior Mark Tatera went 2-for-3 with two walks and a run scored but spent most of his evening roaming the base paths with hopes of scoring the game-tying run.

“We know [hitting with] runners in scoring position has always been our weakness,” Tatera said. “And every time somebody got on base, we had poor at-bats.”

The Cobbers did for the most part, too. They managed just three hits as a team but took a 2-0 lead, thanks to a pair of first-inning doubles off Gophers freshman pitcher Cody Campbell.

Campbell’s teammate, fellow freshman Toby Anderson, took over in the fourth inning and gave up an unearned run, aided by a key passed ball.

That was all the scoring the Cobbers needed.

Though Minnesota’s bats were dormant for most of the evening, a platoon of four pitchers kept Concordia-Moorhead in check. Anderson said he was pleased with the overall performance on the pound.

“I know that pitching wasn’t our problem tonight,” he said. “I still like our freshmen. Some of our kids are figuring it out. They’re doing what we’re asking them to do.”

As a whole, midweek games typically offer coaches a chance to switch up the lineup and experiment a little bit. It’s also a time when freshman pitchers get acclimated to the college game.

This season, however, bad weather has washed out a handful of midweek games for the Gophers. And Wednesday’s game was Minnesota’s last of the season.

“We didn’t have anywhere near enough,” Anderson said. “That hurts your development as a team. Now guys like Cody Campbell and Toby Anderson … don’t get a chance to work very much.”

And all work they’ll do from here on out will be against Big Ten competition.

Minnesota is in a tight race for a spot in the conference tournament. It hosts a three-game set against Purdue this weekend.