Gophers get to rack after half, pull away from Coastal Carolina in win

Andre Hollins led Minnesota with 19 points in a win over the Chants. 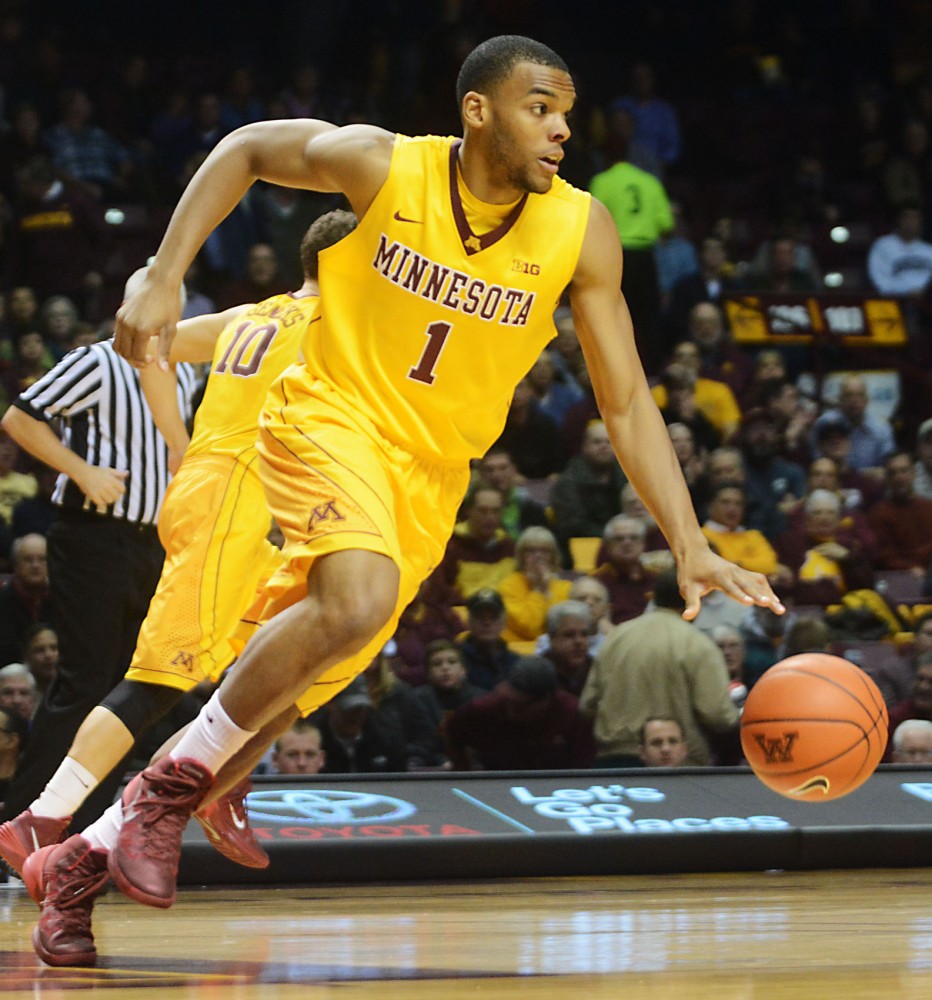 Minnesota guard Andre Hollins pushes the ball up the court against Coastal Carolina on Tuesday at Williams Arena.

The Gophers attempted a lot of three-point shots Tuesday night.

It may have been too many — especially for a team that shot just 28.6 percent from the beyond the arc in the game.

Minnesota took 28 total threes — 17 in the first half — but still managed an 82-72 victory over Coastal Carolina at Williams Arena.

“We fell in love with the three,” junior guard Andre Hollins said. “We should have attacked them [and gotten] to the foul line.”

“It’s kind of hard for us not to fall in love with it because we’re so good at shooting,” Smith said, “but we try to attack the rim as much as we can.”

The Gophers got to the hole more often in the second half, and it proved successful. They made 21 trips to the free-throw line after halftime.

Minnesota led by just six at the break, and Coastal Carolina cut the deficit to one early in the second half. The Gophers didn’t build a double-digit lead until midway through the second half.

The Chanticleers shot 51.9 percent from the field to stick around throughout the game.

But the Gophers were able to force turnovers on the defensive end. They had 20 takeaways in the game, which led to 31 points.

“We did a good job of speeding them up,” Hollins said. “They didn’t run too many sets. They didn’t get comfortable.”

Hollins was once again the catalyst for the Gophers’ offense. He led Minnesota with 19 points, but three other Gophers players finished in double figures.

While Pitino didn’t seem happy with the performance after the game, he said the main thing was the Gophers got the win.

“It’s easier to learn off wins than losses,” Hollins said. “We’re going to learn off this and get better in practice tomorrow.”

Sophomore forward Joey King left the game in the second half after he collided with Hollins. Team spokesman Matt Slieter called the injury a jaw contusion. King experienced some pain and did not return, Slieter said.

Pitino said the Gophers aren’t sure of the extent of King’s injury yet, and he’ll be re-evaluated in the morning.