Students and graduates of the University of Minnesota are essential to the Minnesota Fringe Festival. 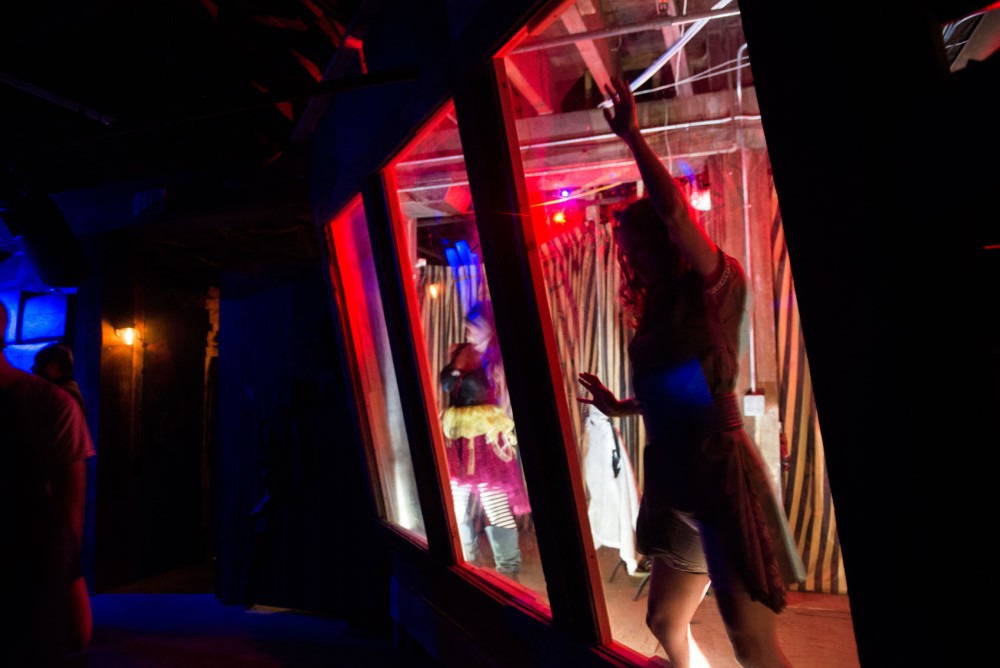 The cast of "Crime and Punishment," a drama featured in the Minnesota Fringe Festival, rehearses at the Soap Factory on Sunday.

From the outside, the Rarig Center doesn’t look like a whole lot of fun.

The concrete monolith stands tall above the brutalist architecture that dominates the University of Minnesota’s West Bank — the fact that it looks like it can’t be burned down is glaringly obvious.

Fringe festivals can run anywhere from four days to a few weeks, and they exist all over the world. Minnesota’s version is one of the largest in the country, and each year, University students and alumni play a strong role in the local performing arts buffet.

“It’s fantastic having college students in the festival. We have students that are very excited about starting their careers,” Larson said. “We try really hard not to put them in Rarig, though.”

Instead, Larson said, the festival aims to put student participants in venues like the Mixed Blood Theatre or HUGE Theater. Getting students out of places where they’re comfortable encourages them to get to know other artists in the community, he said.

“I mean, taking risks is what the Fringe Festival is all about,” Larson said.

But because of the festival’s large size, University students are only one slice of the Fringe pie.

“There are college kids from all kinds of different schools involved with Fringe, but the U of M has a pretty big presence,” Larson said before reeling off festival staff with ties to the University. “Though you’d be hard-pressed to get me to even begin to say what the typical Fringe participant looks like.”
The festival’s lineup is diverse, containing seasoned theater professionals, burgeoning young artists and the occasional group of local folks who decide to put on a show for the hell of it.

Ready for its 21st iteration, the event is the largest non-juried festival in the country, which means there isn’t a panel that preapproves shows as they apply — all 169 productions this year were chosen via lottery.

Andrew Dyrud, a University theatre arts junior, said this strategy brings a sense of fairness to the event.

“It really levels the playing field because you never are guaranteed a spot,” he said. “No matter who you are or what you’ve done, everybody has 10 minutes to load their stuff into the theater and 10 minutes to get it out.”

Dyrud is participating in the Fringe for the first time this year, and he said adjusting to the process is crazier than the average theater production.

Without the luxury of complicated technical wizardry and having only a few days to rehearse in the actual performance spaces — Dyrud and company have been practicing in a classroom in Bloomington — the Fringe forces artists to focus on simplicity and efficiency.

“To be thrown into this, whether you’re a student or a first-time producer, is a scary thing,” Larson said. “You have to think about limitation in a way that people who have done most of their work in a theater program haven’t had to yet. We want to show [artists] how to get past those issues.”

Though artists fork over an application fee to be a part of the festival, they receive many perks. Participants have access to a series of free workshops in the lead-up to the festival, and producers get 65 percent of the proceeds from ticket sales. The workshops’ topics range from learning how to talk with a designer to dealing with poor reviews.

University theatre arts sophomore Fiona Lotti said these workshops made her first time at the Fringe a lot easier.

Lotti isn’t just a first-timer at the Fringe; this is her first time directing a show. She said that receiving guidance from experienced artists on how to maneuver a technical rehearsal was informative and stress-relieving.

“If they hadn’t been willing to sit down with us and answer our questions — I had so many questions — we couldn’t have done this,” Lotti said. “They were so supportive. That’s been the biggest thing I’ve learned about Fringe. It’s a very supportive atmosphere, but it’s also kind of like a parent-child relationship. They’ll guide you, but you have to find your own path.”

Networking, Larson said, is rampant at the festival. Like in any other profession, young theater artists need connections and take every length to build their circle of peers.

University theatre arts senior Jack Tillman, for example, said he values the Fringe’s ability to bring people together. He said he’s never seen a Fringe show and decided to stage-manage one this summer.

“I want to meet a lot of people and hopefully work with them in the future,” Tillman said. “I like the feeling of Fringe. Unfortunately, sometimes doing theater in a University setting puts a lot of pressure on a lot of people. Working with my friends and colleagues is great because I’ve worked with them before. I feel like a more integral part of the process. I have a voice.”

Like the diversity of participants, the content of the shows varies drastically. Creators often tend to run wild because the Fringe allows artists to make whatever they want, Larson said, as long as it isn’t illegal.

“Every year someone always says to me, ‘This can’t be real,’” Larson said. “The students have this reaction, like, ‘You’ll really let us do whatever we want?’ And the students freak out about being able to get on stage and feel unrestricted.”

Jared Zeigler, a recent theatre arts graduate, appreciates the limitless power. He’s working with Tillman on “The Tucking of My Shrew,” which is part drag show and part ridiculous reinterpretation of Shakespeare.

For Zeigler, the Fringe is a perfect venue to blend his interest in glam aesthetics with his small-town Minnesota history. At its heart, Zeigler said, the show is all about  comedy and self-acceptance.

“I wanted to figure out how we could make work as queer Minnesotans about the place we love,” Zeigler said. “I’m getting the opportunity to be in the world of performing again and figure out what I want to do in this city.”

Susie Campbell, a theatre arts junior, is working on a radically different piece. She’s acting in Live Action Set’s adaptation of “Crime and Punishment,” an immersive production in the basement of the Soap Factory. Gritty and dark, “Punishment” takes on the brutality of Dostoyevsky’s novel and spreads it out over the entire basement, inviting audiences to explore at their own pace.

Campbell said the chance to work with the well-known company feels like a step forward for her career. This is her third time participating in the Fringe and her first time doing so with a company that wasn’t comprised of her friends.

“It’s dirty and gross and dark when you’re [in the Soap Factory’s basement]. There’s no way to tell time. It’s a good work space, actually, because there are no distractions,” she said. “It’s great to be working in this festival again — this show feels similar to a lot of the stuff done at the University. It’s collaborative. All of us come up with action to portray on stage, and we create a lot of our own text on the spot.”

Continuing down the spectrum of wildly different genres, theatre arts junior Laura Mason is working on a musical walking tour of the West Bank. “Into the Unreal City” is a musical about memory, following one couple through three different stages of their relationship. Only 20 audience members get to check out each performance.

These are only a few instances of the artistry the college demographic brings to the Fringe Festival.

“How the theater community is going to get young audiences in seats is always a big question,” Larson said. “I think the Fringe does this naturally. I think our growth is in introducing college student audiences to theater. People come see their friends in shows, people create their own shows — we don’t have to think, ‘What do we do to appeal to the kids today?’ It just happens.”