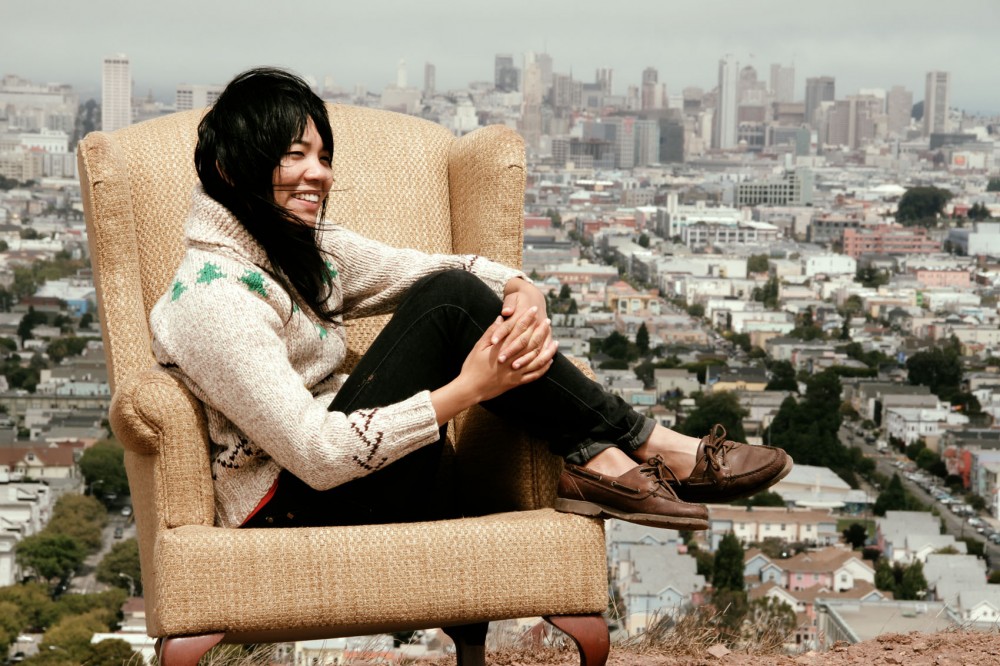 Thao Nguyen may have a shy exterior, but underneath is a pile of dynamite.

When Thao Nguyen performs, she’s something of a contradiction.

At Bonnaroo in June, Nguyen shyly walked on stage and waved hello at the audience with a small smile that matched her diminutive frame.

Then, in an instant, she looked back at her band, the Get Down Stay Down, and her quiet presence toppled into an explosion of energy for the lead single from “We The Common,” the group’s latest record.

Nguyen sighed and swayed with passion as the group’s anthemic folk prompted a similar response from the festival crowd. She returned to her laid-back personality during her conversation with A&E this week, though it’s clear that her vibrant performance energy is just a guitar lick away.

The songwriter said her intensity reaches its peak when she plays material from “We The Common,” which draws from Nguyen’s work with the California Coalition for Women Prisoners. Since 2011, Nguyen has visited prisoners in California, talking with them during visiting hours.

“The writing was a lot more visceral and connected because of it. It’s not out of the ordinary to spend the next day crying after a visit,” she said. “It was an education I’ve received and am receiving. It helps me want to try to be better and appreciate things for people.”

“We The Common (For Valerie Bolden)” is the album’s first single and it’s based on the first person Nguyen met through the women prisoners program. The song plays like a rallying cry, combining twangy strings and a steady, thumping drum beat that builds to an erupting chorus. Though “We The Common” is a record with social justice themes, Nguyen said her intention isn’t meant to be didactic.

“I mean, we keep going and still manage to look out for one another and unite against bigger powers. I wanted that positivity there,” she said. “If you wanted to take the time and go to the lyrics, you can see what it’s about, but the underlying element — more than anything political — is wanting to be a better person. That comes from all of the time I spent with the people inside, too.”

Perhaps that sentiment is Nguyen coming full circle. When she first started playing guitar as a kid, it was to combat loneliness. Nguyen said she was shier as a young person and would often spend her time practicing alone, even falling asleep with the guitar in her arms.

She couldn’t keep music to herself for long. When she entered high school, she played at open mics with her friends every night of the week. Eventually, Nguyen said, she found a community in music.

“I miss the way I was devoted to it then,” she said.

Now, Nguyen plays big festivals, including Newport Folk Festival this year, which she said was a dream come true.

She uses her work to get closer to others, and she said the confidence she found through her medium helped her grow as a person.

“I always have to remember that people are at shows because of the songs you’ve written and you should own that,” she said. “Stay true to that. It’s easy to get lost in people’s opinions.”

What: Thao and the Get Down Stay Down at the Skyline Music Festival
When: 5:30 p.m., Friday
Where: Target Field, 1 Twins Way, Minneapolis
Cost: $29-49