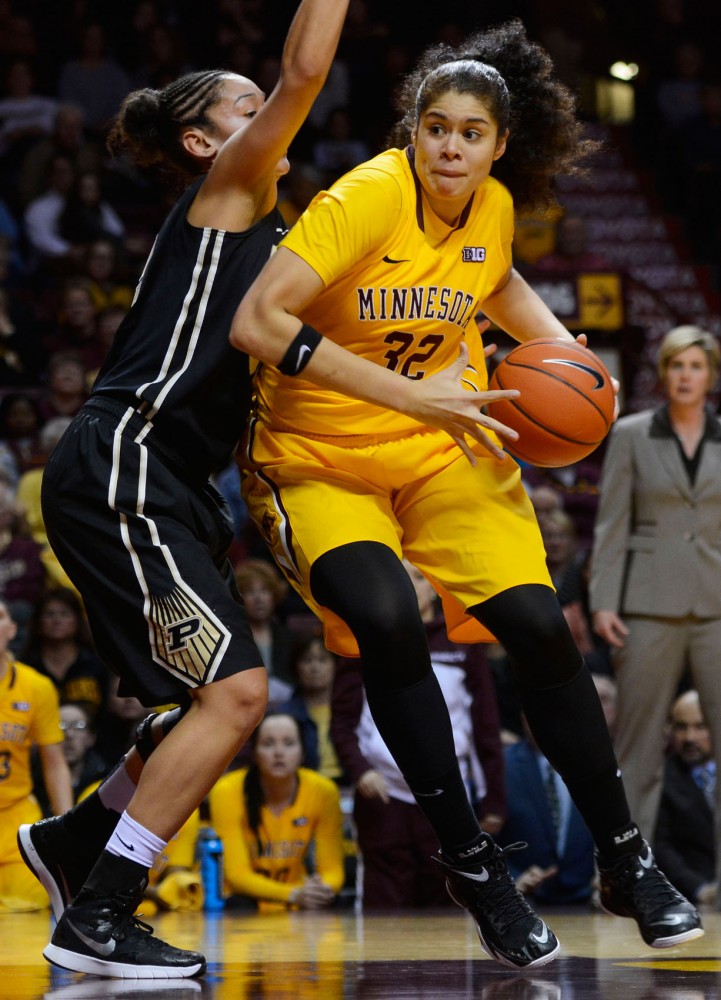 Gophers guard Amanda Zahui B. runs the ball past Purdue at Williams Arena on Thursday. Purdue beat out Minnesota by 2 points in overtime, with a final score of 90-88.

Northwestern sophomore forward and Minnesota native Nia Coffey’s presence was felt the entire game. Coffey, a graduate of Hopkins High School, chose Northwestern over Minnesota and was one of two highly-sought after in-state recruits in her class.

“She’s very talented. We tried to have people around her as much as possible, but she got loose a lot. We’re very well aware of how talented she is,” Gophers head coach Marlene Stollings said.

Coffey finished the game with 12 points and 12 rebounds in 32 minutes on the floor.

The other sought-after recruit was Vanderbilt redshirt freshman Rebekah Dahlman.

Coffey stands at 6 feet, 1 inch, and she possesses the skillset to play at a high level on both ends of the court.

Kelley said she respects Coffey’s skills, but her lack of production was largely due to her lack of rhythm.

“My rhythm just wasn’t there tonight. That was the main thing for me,” Kelley said.

Coffey gave Zahui B. a run for her title on Sunday, finishing the game with three blocks to Zahui B’s four.

Minnesota’s dominance rebounding and scoring the ball has been present throughout the season, as Zahui B. averages a double-double in points and rebounds for the season.

Coffey’s aggressiveness and physicality in the post kept Zahui B. under her season average, limiting her to 13 points.

But Minnesota has a top in-state recruit of its own who gave it an all-around effort in the loss.

Wagner said the team lacked energy, which made it tough to win the game.

“We couldn’t get anything going on the offensive end. It was just a struggle,” Wagner said.

The Associated Press named Coffey and Wagner to the 2012 Minnesota AP All-State girl’s basketball team, and though Wagner had never played against Coffey, Wagner said she enjoyed the matchup Sunday.

“It was cool. She was a great player in high school. It was just good seeing her do well at a Big Ten school,” Wagner said.