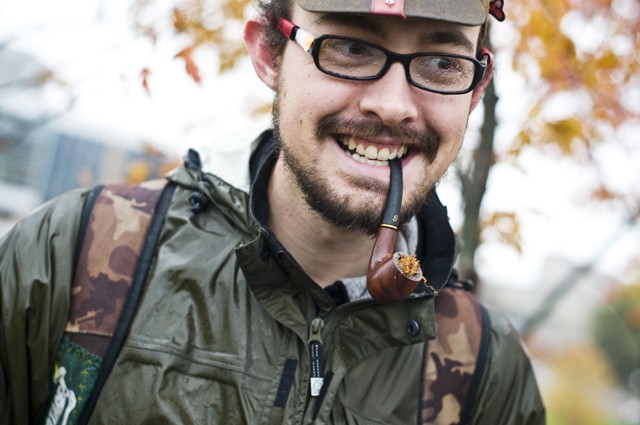 Cherry tobacco smoke wafts through downtown on a cold and rainy night. A pipe is clenched tightly between the teeth of tweed-clad Carlos Espinosa, one of dozens who took to the streets of Minneapolis last Friday for the âÄútweed ride.âÄù The ride, during which more than 40 cyclists wandered across the city late into the night, is part of a national trend combining bicycling advocacy and late Victorian classiness. Tweed rides began in London and take their name from the garb riders wear. According to the âÄúMinneapolis Bike LoveâÄù Web site, a forum for cyclists in the Twin Cities, the suggested attire for the ride included woolen plus fours, Harris Tweed jackets, flat caps, Fair Isle jumpers and alpaca coats. Braving the conditions, many riders appeared in three-piece suits and knickerbockers. Some wore their suits over weather-proof Lycra suits while others stuck to more traditional long underwear as they pedaled through the rain. The ride was organized by a group of cyclists from the Sandwich Cats Bicycle Club. The Sandwich Cats, mostly made up of Augsburg College students, is a bicycle advocacy group that seeks to promote a growing bicycle culture within the city. The real focus of the tweed ride, according to Jake Quarstad, an organizer of the event, was to bring attention to forms of transportation other than cars. âÄúEspecially in the city, we want people to know how viable bikes are as an alternative,âÄù he explained. âÄúThey are not only fast but also a great green option as well.âÄù Tweed rides are a form of a critical mass ride in which a mass of cyclists spread across the road and effectively block off car traffic. This momentum allows the riders to coast through red lights and stop signs, generally disregarding normal traffic laws. The sheer number of riders makes a statement, said Nate White, an Augsburg student and event organizer, but âÄúthere is a line between making a positive point and just irritating people.âÄù Lars Christiansen, a professor of sociology and urban studies at Augsburg College who rode with the riders, said he was afraid the event would have an exclusive group of riders rather than being the inclusive event it strives to be. âÄúLook at whoâÄôs here,âÄù Christiansen said, as he surveyed the group atop the hill in Gold Medal Park where the ride began, âÄúmostly 20 to 25-year-old men, hipsters and devoted bike riders already.âÄù Responses to the tweed procession were mixed on Friday. As riders glided through an intersection near Nicollet Mall, someone leaned out of their car window angrily shouting âÄúGet off the road!âÄù âÄúGet out of your car!âÄù was the quick response from the pack of bikers.