Tori Dixon will be one of the leaders for the Gophers next season. 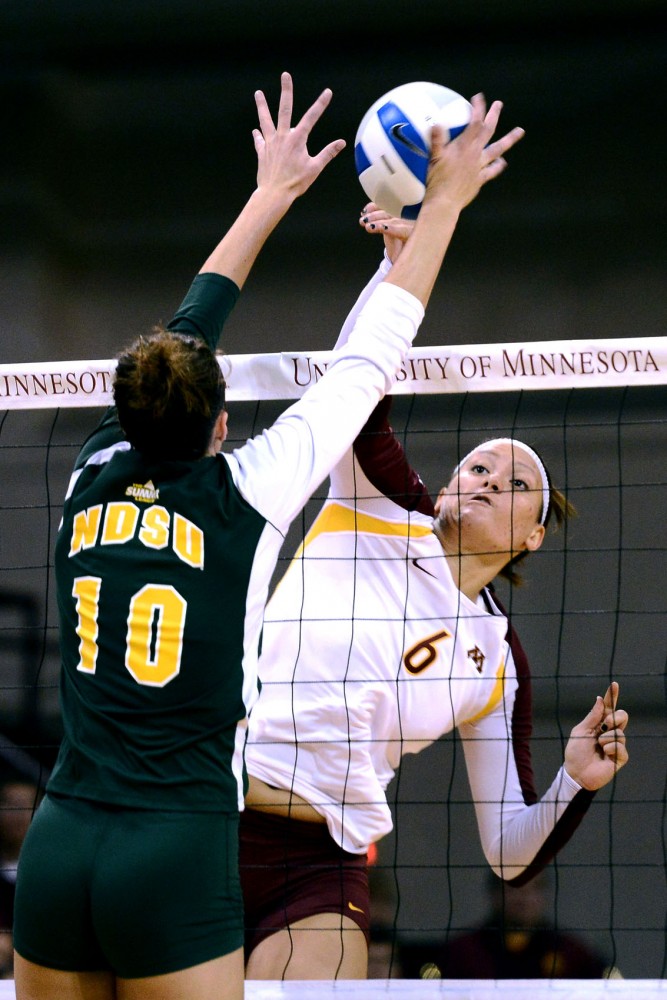 Over the last two weeks, Gophers senior Tori Dixon got a taste of what it’s like to be at the bottom of the totem pole again.

And this summer, there’s no place she’d rather be.

The stud middle blocker was one of three college players invited to work out with Team USA in Anaheim, Calif., for the team’s regular summer practices. She said she felt like a freshman again as soon as she walked into the gym.

“It was a challenge, and the biggest check for me was the speed of it,” she said. “It was so much faster than I’ve ever even seen.”

Dixon said it took a while to adjust to the speed of the game, but once she did, she held her own with the other players on the court.

Gibbemeyer was a senior at the University of Minnesota when Dixon was a freshman, and the veteran said she took Dixon under her wing that season.

That wasn’t necessary this time.

“It wasn’t like she came in the gym and everyone could pinpoint that she was a college player on the court,” Gibbemeyer said. “If someone watched our practices, they wouldn’t know that she is a college player. She fit right in with the rest of the team.”

Dixon said the culture in the gym was different than a practice with the Gophers. She said it was a lot more intense and she was intimidated at first, but she didn’t let it show.

“They invited me for a reason, and I was supposed to be there,” Dixon said. “That’s the mentality I came in with, and it worked well over the two weeks.”

Gibbemeyer said she has seen immense growth in Dixon’s game over the last three years. She recalled that Dixon was a little timid in her first season with the Gophers, but she has evolved since then.

Gibbemeyer has watched Dixon play at times over the past three years, but the last two weeks were the first time they’ve played together for an extended period since their time with the Gophers.

“She has become a lot more confident,” Gibbemeyer said of Dixon. “She really trusts herself now, and she’s become a well-rounded player.”

Dixon will serve as one of the best players on the Gophers this upcoming season. But Gophers head coach Hugh McCutcheon said as her career wraps up, that skill won’t be enough to make it at the next level, when consistency becomes more important.

“She’s a wonderful collegiate volleyball player, but at this level it’s good to be good nine out of 10 times, and internationally it’s got to be good 99 out of 100,” he said.

Dixon said a goal this season is to implement what she learned with Team USA with the Gophers.

“I don’t know if it’s the skills themselves but rather the overall attitude and mentality that goes around,” Dixon said. “It’s a much different style than what I’m used to.”

Dixon’s Gophers teammate, senior outside hitter Ashley Wittman, also trained with Team USA in its A2 program earlier in July.

Dixon said this short trip has motivated her to take her game to another level. She said she has thoughts of Team USA in the back of her mind entering the 2013 season.

“I’m going to finish strong this season,” Dixon said. “If they like what they see and I continue to improve, hopefully I get another invitation in May.”