The Guthrie’s “Julius Caesar” is so modern that it hasn’t happened yet. 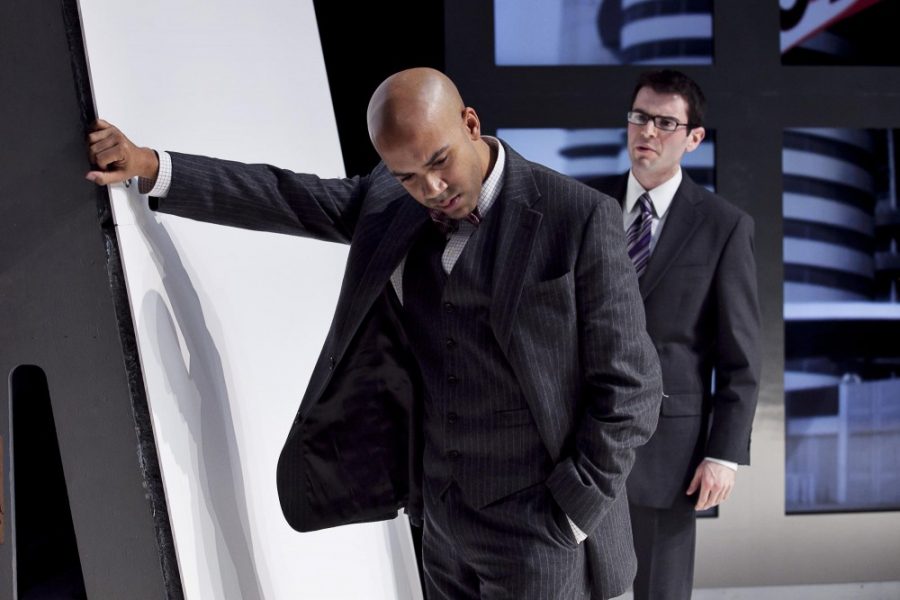 When: Runs through Feb. 5

âÄúJulius CaesarâÄù is not a comedy. Which means in Shakespearian terms, it must necessarily end with more steel-mediated deaths than a Quentin Tarantino film.

No curtains draw closed as the light dims to black over a stage riddled with bodies, as the wall of TV screens that comprise the set finally cease their show-long flickering. The audience is left in a silence like desert night, and the wind that drew any moisture out of the room felt just like fear, a collective fear at the future presented by director Rob Melrose. The audience breathes (or doesnâÄôt breathe) like theyâÄôve just seen a ghost, a pale reflection of their world and its fate, a clear warning sign of things to come. And to make matters worse, that fate was perfectly predicted by a balding English playwright who died nearly 400 years ago.

Our high school English teacher always told us that Shakespeare was a good writer, but she never told us that he knew the freaking future!

The Guthrie TheaterâÄôs new production of âÄúJulius CaesarâÄù is exhilarating in its modernity and eerie in its accuracy. One of ShakespeareâÄôs most performed histories, âÄúCaesarâÄù chronicles the days just before and after the murder of its titular ruler in the last century before the Common Era.

The social and political warnings inherent in CaesarâÄôs ambition and the fall of RomeâÄôs Republic have resonated with audiences in a great many eras, as actor Sid Solomon (playing Cassius at the Guthrie) noted, âÄúEvery review I have read of past performances has made a point of saying that âÄòthis is very relevant to our time,âÄô whether that be from five, 10 or 40 years ago.âÄù

What makes this particular production remarkable is that it has been custom fit to this very moment in history âÄî indeed, as Solomon noted, âÄúIt might even happen tomorrow.âÄù

The truths of our time revealed through this reprocessing of the past spatter against every surface of the small Dowling Studio. The wall of screens that play backdrop open with the faces of a dozen broadcast pundits, the âÄúsetting,âÄù of our modern political landscape. As the screens switch to Occupy protests and modern boardroom suites, we are introduced to the characters, to CaesarâÄôs physical domination and BrutusâÄô inner turmoil (Assassination? No assassination. Assassination? Definitely assassination). Casca is a Jamba Juice-sipping gossip and Antony is a greasy patronage hound, and they all reek of our current broken system.

All of this setting could be trite and wasted, however, if it werenâÄôt for the way ShakespeareâÄôs dense dialogue was delivered. Famed vocal coach Andrew Wade worked with the actors to seamlessly merge centuries-old words with current delivery and style. When Brutus and Antony trade funeral orations it feels like President Barack Obama and former Massachusetts Gov. Mitt Romney spinning the same point against each other âÄî as real as any such pandering can be. And then you hear the word âÄúwhereforeâÄù and realize that youâÄôve lost yourself again in the wily old bardâÄôs genius.

One of the best innovations for comprehension was the use of ambient noise, a near-constant throughout the performance. Production team members crafted a 128-track album for the show, which uses a mixture of dissonant synthesizer drones and realistic environmental noises to lend extra weight to the characterâÄôs words. At points, the music functions as a perfect clue to the speakerâÄôs intent, freeing them to fit their words more accurately to modern diction.

There are moments that are truly cringe-inducing as the mirror of this play is held up to the audience for makeup-free viewing. When Antony claims he has no oratorical powers like the great Brutus and then proceeds to use his words as a lightning rod igniting Rome, images of Bush and Perry, âÄúregâÄôlar guys, Average JoesâÄù come to mind. Loving spouses are ignored for politics âÄî for the drive to power (or world betterment?) that their single-minded husbands cannot but give in to. Revolutions succeed, dictators are toppled and the ensuing chaos is bloodier than any act of the deposed autocrat. Humans struggle and fail and curse their friends, and the world keeps turning.

In the end, the protagonists lie sprawled across the imagined sands of Philippi in army fatigues, and autocracy wins. The future of Rome, however, was incredibly bright for the next hundred years, and she attained her greatest heights under the peace of Octavius Augustas If Shakespeare always reveals something, it is the indomitable spirit of humans despite the terrors of their world.

That doesnâÄôt mean we shouldnâÄôt try to see our future through the past and find ways to change it. In the words of Will Sturdivant, the Brutus of this performance, âÄúWe havenâÄôt even gotten to the roots of how relevant [Julius Caesar] is yet.âÄù The Guthrie is using this production to shine a mirror at the audience and then cast that light into the future.

Let us hope that we can change ourselves enough to shine that light onto a brighter finale.