The Gophers had the final shot of the game, but couldn’t connect on a 3-pointer. 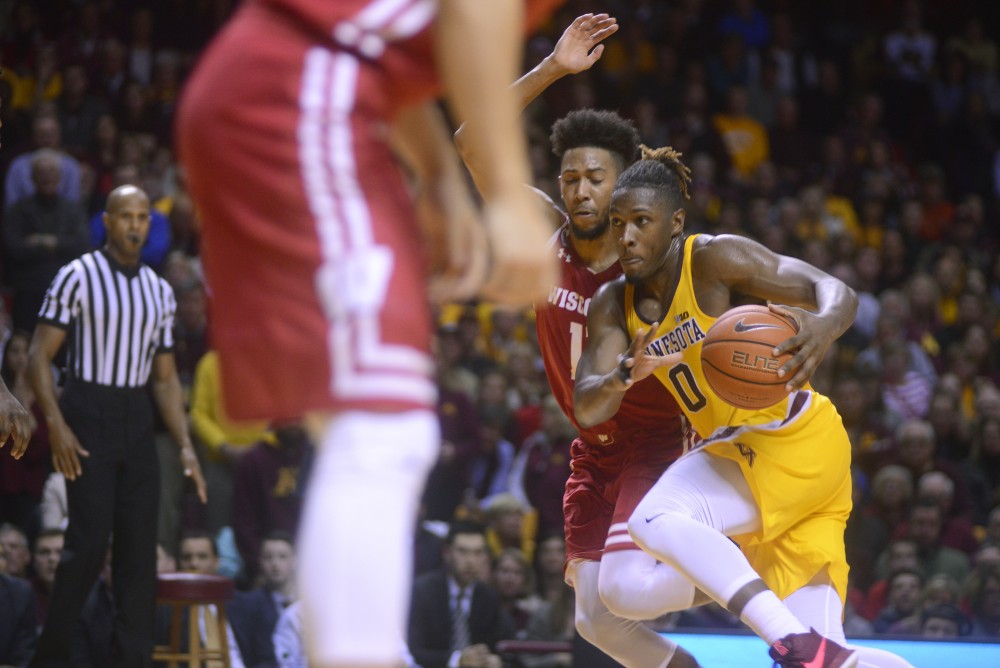 Gophers guard Akeem Springs drives toward the basket against Wisconsin on Jan. 21, 2017, at Williams Arena.

Akeem Springs had already been Minnesota’s hero once, and all eyes fell on him in the closing seconds of overtime.

The guard, who had sent the game into extra minutes early on, bounced the last shot off the rim, and the Gophers’ last chance at an upset was spoiled.

“I don’t normally enjoy coaching during the games, but I kind of enjoyed it,” said head coach Richard Pitino. “[Wisconsin] just made one more play.”

Springs entered the Gophers’ starting lineup for just the second time against the Badgers. The graduate-transfer amassed 16 points on 6-12 shooting in the game.

“I always saw myself as a starter; it wasn’t something I was really focusing on,” Springs said. “I want to be able to do all the little things.”

Meanwhile, guard Dupree McBrayer moved to the bench for the first time all season and fared well. McBrayer went 5-7 shooting with 14 points — his highest point total since Dec. 27 against Michigan State.

Guard Nate Mason struggled to score in the game with just eight points. However, he did get 10 assists.

One of Mason’s 10 assists came on a broken play.

Mason was able to find forward Eric Curry as the guard fell to the floor. Curry hit a jump shot from the baseline to help the Gophers take a 76-74 lead in overtime. Curry finished with five points and five rebounds.

Center Reggie Lynch fouled out of the game for the fifth time this season. Lynch played 20 minutes in the game and led the team in with seven rebounds.

Wisconsin forward Ethan Happ tied the highest point total scored by a Wisconsin player this season with 28 points in the game. He also tallied six assists and 12 rebounds.

Konate made an impact as a rim protector when he forced a miss from Happ under the rim with 3:07 left in overtime. Unfortunately for the Minnesota, the missed shot went right to Wisconsin’s Bronson Koenig for the game-winning 3-point shot.

Koenig finished with 11 points and went 3-5 from behind the arc.

Guard Amir Coffey led all Gophers players in scoring with 19 points in the game. Coffey shot 8-14 from the field.

Coffey drove to the rim and was fouled as he made the contested layup with 15:28 to go in the second half. The shot was a go-ahead basket for the Gophers, and the team led 40-38.

“It’s a physical league,” Coffey said. “You have got to go into every game expecting a dog fight.”

The Badgers had a chance to make it a two-possession game, but a traveling call on Hill led to the Gophers getting the ball back with 22.2 seconds in the game.

Happ’s presence down low led to the Badgers scoring 44 points in the paint compared to the Gophers’ 24 points.

Minnesota will look to bounce back from its three-game losing streak against Ohio State in Columbus, Ohio on Jan. 25.

Pitino said he hopes that the team will be able to respond from the defeat.

‘They need to be positive,” Pitino said. “I don’t see a whole lot of negative to look at from tonight besides that we lost. We can only get better.”