About 97 percent of University medical students were paired with a program. 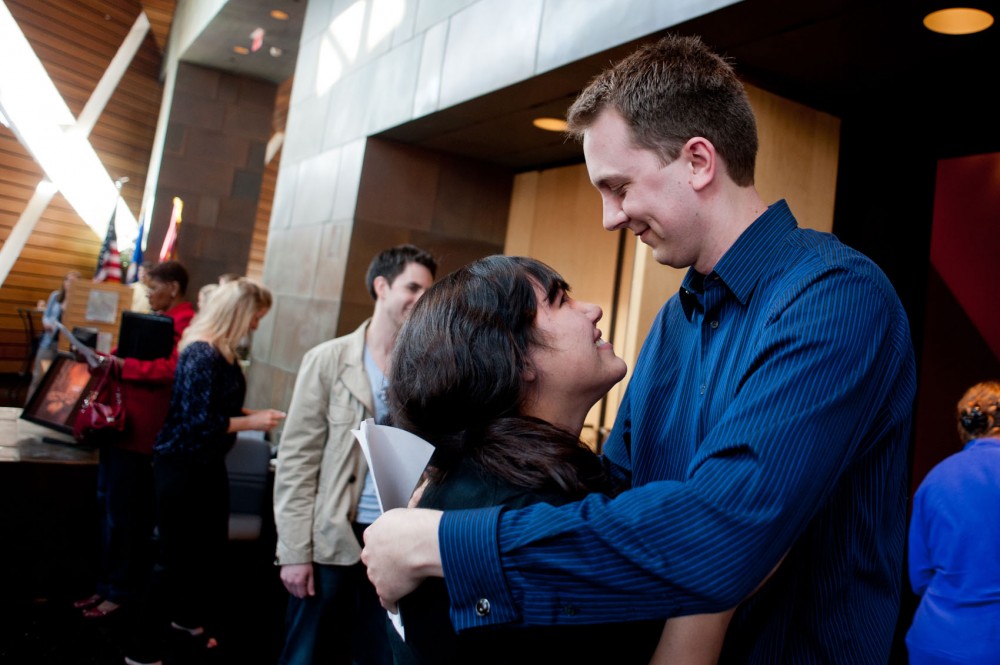 Scott Deeney embraces his wife Sarah after learning his match for his residency program Friday at McNamara Alumni Center. Deeney will be going to the University of Colorado Denver and focusing in surgery.

Every fourth-year medical student in the country who applied for a medical residency program opened an envelope Friday revealing where they would be spending the next three to five years.

Of the 219 fourth-year medical students in the University of Minnesota’s Medical School, 213 were matched to a residency program.

“Match day” comes at the end of a weeklong process in which students are either placed or not placed into their residencies. Most students learned whether they were matched to a program March 12 but didn’t find out where until Friday.

Students and the residency programs rank each other in order of preference. The lists are then sent to the National Resident Matching Program where a computer matches the two.

Two major changes were made to the match day week this year. In the past years, match day occurred on the third Thursday of March. This year, it occurred on Friday to comply with the new program that affects those who are not originally placed in a residence.

In past years, students not placed in a residency on Monday were forced to frantically find an open residence by the following Thursday — calling and emailing different programs while the list of open spots quickly shrank.

With SOAP, applicants who initially failed to match prepare their applications for open positions using the Electronic Residency Application Service, used by applicants and programs to send and receive materials. Instead of contacting the programs themselves, ERAS will contact them for the students, saving many students time and stress.

Beginning Wednesday, those who weren’t matched were sent an electronic offer from a residency program through NRMP. The student then had a two-hour window to accept or decline the offer. If a student declined, then the next student on the list was contacted.

Once the student accepts the offer, he or she is bound to that residence.

“SOAP is a more organized way of handling unmatched students and programs,” said Scott Davenport with the Medical School’s Office of Student Affairs.

Around 90 percent of students don’t have to go through the SOAP process because they are placed in a residence on the first day, Davenport said.

“[The process] helps even the playing field and disperse talent,” he said.

The process of matching a student to a residence is extremely competitive, depending on the field of study. Often, there are many students applying for only a few spots. Students are allowed to apply to as many residences as they wish but must pay a fee each time. For $75 they can apply for up to 10 residencies and it costs extra for additional applications.

Davenport said that out of 213 University medical students placed in a residence, around 45 percent were placed in residences in Minnesota.

About 46 percent were assigned to primary care fields.

There was also an increase of students who were placed in residences for psychiatry.

Nationally, 95 percent of students were placed in a residency — the highest number in 30 years, according to an NRMP press release.

During their residencies, students will become more specialized in their field while also being paid.

Fourth-year medical student Jenna Clappier was matched March 12 and said the process of applying was very time-consuming. The students had to have letters of recommendation and write a personal statement explaining why they chose their specialty.

“Everyone spends a lot of time on the personal statement because they only want to go through [the application process] once,” Clappier said.

She said match day was a surreal and nerve-racking experience.

“I felt excited and anxious because I didn’t know where I was going to be the next few years,” she said.

She went through a couples matching process so she could be in the same place as her husband, another medical student. They will both be staying at the University’s Medical School for their residencies.