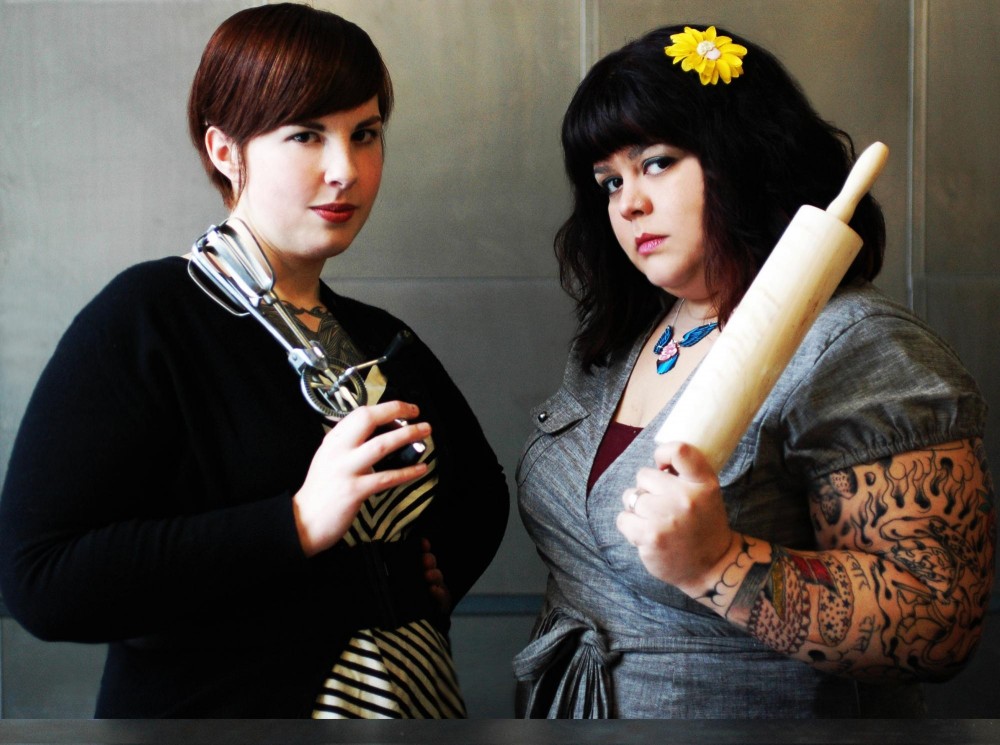 I am drinking coffee with the ladies of Cake Eater Bakery, and though IâÄôve only known them for about three minutes, I already know that their soon-to-open shop may become my new favorite hangout. âÄúWerenâÄôt we going to do this interview in LilâÄô Jon voices?âÄù asked Sheela Namakkal, one-half of the cupcake enterprise. âÄúOh, yeah!âÄù answered the other half, Emily Harris, as we sat at 2nd Moon Coffee CafÃ© on Franklin Avenue. The pair was in the midst of an incredibly busy day of running errands to ensure a smooth, working order for the upcoming opening of their âÄúcupcake boutique.âÄù Though the opening date (April 5) of their 25th St. E location is coming up fast, their easy, friendly chatter betrayed little stress. They donâÄôt take themselves too seriously either. âÄúItâÄôs a bakery run by cartoons!âÄù they joked. Sweet treats like those proffered at Cake Eater are all the rage in our fair Cities at the moment. Sweets Bakeshop in St. Paul and the Sweet Retreat on 50th St. and France Avenue in Edina have recently opened their doors. But Namakkal and Harris arenâÄôt worried about the competition. âÄúCupcakes may be hot, but no oneâÄôs doing it as boutique-y and haute cuisine as we are,âÄù Namakkal said. Namakkal has University of Minnesota roots; she graduated with a degree in womenâÄôs studies, and her sister is currently a history grad student. Of her culinary background, Namakkal said sheâÄôs been in the kitchen since she was thirteen. âÄúI always go back to food.âÄù SheâÄôs the primary baker at Cake Eater, which boasts a roster of over 150 flavors, from vegan raspberry lemonade to whiskey chocolate to their super-popular âÄúElvisâÄù cupcake: peanut butter, bacon, banana and marshmallow. Where do these flavors come from? âÄúI donâÄôt sleep! IâÄôm always thinking about flavor profiles,âÄù she said. âÄúOther places use a buttercream, but our style is more American, a heavy cake and frosting,âÄù Harris said. âÄúWe both have a savory palette. The flavors are intense. A bite of a something with an extreme amount of flavor, weâÄôll give you that.âÄù The ladies refuse to hint at their ingredients, as recipe thievery exists amongst the local baking set. âÄúItâÄôs a cutthroat cupcake world,âÄù Namakkal said. Harris, who hails from Vermont and moved to Minneapolis to attend the Aveda Institute , will be manning the caffeinated aspect of Cake Eater, serving Intelligentsia Coffee from Chicago. âÄúWhat I like about coffee is that you can make a small batch or a drink really special if you want. You can go about it in two different ways: artisanal or just churn it out, and we donâÄôt want to churn.âÄù The pair has been making magic in the kitchen for a while. Their cupcakes have been sold at Mitrebox Framing Studio , the St. Paul Cheese Shop and The Triple Rock Social Club. After favorable reviews, the increased demand led to a catering business, which does high traffic in weddings âÄî cupcakes are the big fad for wedding desserts at the moment, along with macaroons. The next logical step was a bakery of their own to whip up sparkle-spackled cupcakes. Right now, the Cake Eater team uses the Triple RockâÄôs facilities and dons its bright green aprons with pride. A recent catering event had the entire Triple Rock bar covered in cupcake boxes. Even though the economic climate isnâÄôt great, the ladies found their perfect space, which they set about painting bright orange, red and magenta with gold and black detailing and a mural in the bathroom. âÄúItâÄôs Bollywood meets Marie Antoinette. WeâÄôre a little punk rock and want a punk rock bakery,âÄù Namakkal said. The name is an obvious Marie Antoinette reference, though it has local roots too, particularly an Edina-related âÄúMighty DucksâÄù quote . Remember how one teammate is deemed a âÄúcake eaterâÄù because heâÄôs a rich kid? ItâÄôs OK, Edina kids, they donâÄôt mean it as an insult. DonâÄôt adore cupcakes? DonâÄôt worry. Cake Eater will offer pies and pastries too. So if your mouth is watering, mark April 5 on your calendar and let them eat cake, indeed.