Gophers go silent down the stretch, lose to No. 20 Illinois 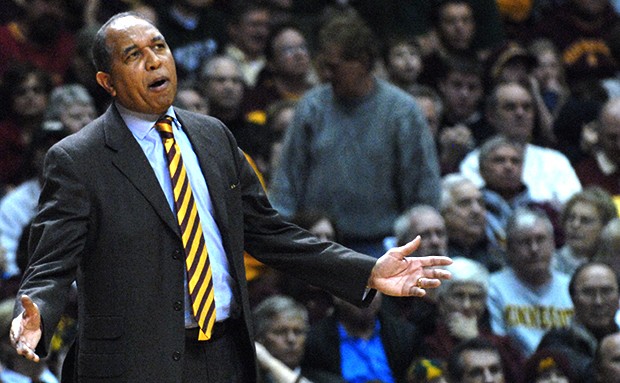 It couldâÄôve been another upset over Illinois. It couldâÄôve been an affirming road win for a team that has struggled all season away from Williams Arena. It couldâÄôve even been a ticket to the NCAA tournament. Instead, it was another close loss for the Gophers menâÄôs basketball team Thursday night. They kept up with the No. 20 Illini for the first three-quarters of the game, but saw their offense fall flat in the final 10 minutes in a 52-41 loss in Champaign, Ill. The Gophers didnâÄôt score in the last 6:21 of the game as Illinois finished the game on a 10-0 run. Head coach Tubby Smith, usually loud and animated on the sidelines, spent the final minutes of the game sitting with a cold glare. Junior forward Damian Johnson played one of MinnesotaâÄôs best all-around games, scoring nearly half of its points (18), along with five steals, three blocks, four rebounds and two assists. But it went to waste with the teamâÄôs season-high 20 turnovers, including four apiece from starting guards Al Nolen and Lawrence Westbrook. âÄúDamian had a great game, and weâÄôre trying to get him the ball but we canâÄôt even get him the ball because we donâÄôt have a guard who can keep the ball long enough to throw it into him,âÄù Smith told WCCO Radio after the game. He added: âÄúNine assists and 20 turnovers? ThatâÄôs about as pathetic as you get.âÄù Only four of JohnsonâÄôs points came in the second half, and with no other hot hands, the Gophers scored just 18 points. Westbrook, the teamâÄôs leading scorer, shot 2-for-10 from the floor and missed all four of his three-point attempts in the game. Devron Bostick went 0-for-6. Nolen and Devoe Joseph each went 0-for-5. âÄúDamian did a great job, he led the break for us and everything, but heâÄôs one of few guys,âÄù Smith said. âÄúI canâÄôt play him everywhere. I canâÄôt play him at the point, too.âÄù Freshman center Ralph SampsonâÄôs layup with 6:21 left pulled the Gophers within one, at 42-41. After a Johnson turnover, IllinoisâÄô Demetri McCamey hit a three-pointer to push the lead to four. In a big possession with less than five minutes left and coming off a timeout, Westbrook took a pass in the corner and, apparently unaware of the shot clock, let it run out as he looked for a shot. IllinoisâÄô Trent Meacham followed with another three, and Westbrook took the ball down the floor and missed a hurried jump shot. Five different players missed shots after that. âÄúWe took a bunch of bad shots. ThatâÄôs one thing,âÄù Smith said. âÄúWith a combination of bad shots and turnovers, youâÄôre going to lose.âÄù