The 25th annual Fringe Festival will take place across Cedar-Riverside and Northeast from August 2 to 12. 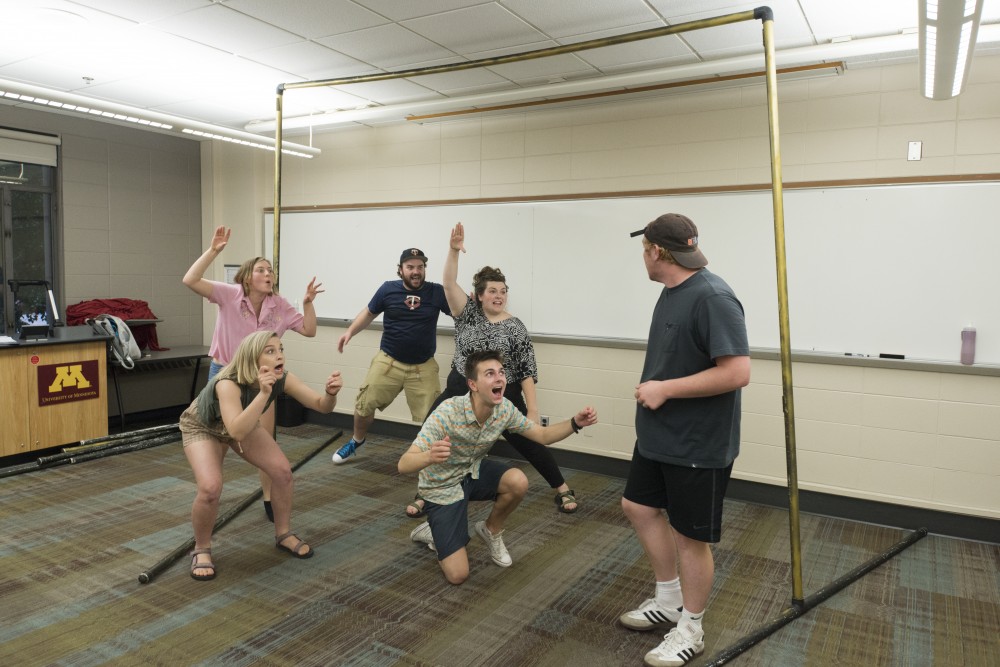 The cast of "Wonder and Awe: a Play about Magic," rehearses in Blegen Hall on Monday, July 23. The production will feature futuristic magic, comedy, and puppets and premieres on August 3 for the Minnesota Fringe Festival.

In its 25 years, the annual Minnesota Fringe Festival has filled thousands of seats at theaters across the Twin Cities. Modeled to be widely accessible like the Edinburgh Fringe Festival in Scotland, performers are selected though a lottery.

“There is no portfolio required: you just need to apply,” said Dawn Bentley, the executive director of Minnesota Fringe.

Fringe encourages artistic play through its low-risk environment. Anyone can participate, and performers are almost guaranteed an audience of willing and excited theatergoers.

“Anyone can be an audience member. Even if you don’t normally think of yourself as a theatergoer, there’s going to be something [for you] at Minnesota Fringe,” Bentley said. “And it’s a low-risk engagement because it’s inexpensive.”

To help you plan your schedule for this year’s Fringe, A&E talked with three groups bringing their work to stages across Cedar-Riverside and Northeast.

“Wonder and Awe: A Play About Magic”

Spectacle drives “Wonder and Awe: A Play About Magic,” which features characters with dueling opinions on the art form. Comedy and magic intersect in the play, two concepts which director and University of Minnesota theater arts and English senior Nick Saxton found complemented each other. Saxton wrote the show with University graduate Andrew Friedman and their former high school teacher, Drew Hammond.

“[Hammond] really brought heart and substance to it, because I think [Friedman] and I tend towards the absurd of things,” Saxton said. “We’ll be like, ‘Uh, what if a giraffe crawls onstage’… and [Hammond] will be like, ‘Oh, we can totally do that, but how much smarter would it be if we contributed to the story too?’ So I think that push was really helpful.”

The rehearsal room for “Wonder and Awe: A Play about Magic” can be just as thrilling as the show itself, with a talented cast and a musician in the room constantly experimenting with new ideas.

“The room is always at the moment where the tennis ball is right in the air and everything is like ‘ooo, what’s going on,’… so rehearsals, above all else, are just so much fun,” Saxton said. “It’s [some] of the funniest people I know all trying new things constantly.”

Using magic as a lens and music, comedy and puppetry as tools to create a bit of wonder, the team hopes to dig deeper than just pure spectacle.

“If we’re doing a [magic-themed] show, it should be a show where people walk away and, at the very least, are like, ‘Wow, that was very cool to watch,’” Saxton said. “Hopefully we add on characters and stakes and something for people to take away — a question that they can ask themselves on the way to the next show.” “Hamlet, but Hamlet’s a Chicken”

The title pretty much says it all. Grand Island Theatre, whose core members are recent University alumni, has joined forces with three chickens, Tilly, Henley and Layla, who you might recognize from PAWS events on campus. The chickens will take the stage as the play’s famous protagonist.

Hamlet’s lines are gone, which helped fit the lengthy text into the Fringe time limit of 60 minutes.

“Hamlet, but Hamlet’s a Chicken” is more than just a silly twist on one of the most well-known plays in history. The performers worked with drama adviser Tate Sheppard, who researched Dadaism, an art movement based in absurdist reflections of real world tragedies.

“The movement was in response to horrific events in the early 1900s, and I find that really inspiring because it was this explosion of emotion and feeling… allowing space for pure gut reactions and instincts,” cast member Isabel Patt said. “I think that, in the time we live in now, we need to make room for that too.” “I started seeing this guy via Tinder. I just couldn’t stop thinking, ‘Here is this person who is perfect in so many ways on paper’… but how little we actually connected astounded me,” Colwell said.

The resulting play, “Rejection,” follows a group of young friends as they participate in a study on intimacy. Colwell and “Rejection” director Aidan Jhane Gallivan held discussions with the cast, allowing the script to develop even further.

“Some of the [characters] are very much the same as they were the first time around, just more colored in,” Gallivan said. “Others have changed more dramatically since the initial version, and that’s been because of the actors involved.”

Though the themes of dating and relationships are clearly present in the script, an even more universal theme is prominent.

“I think, more than relationships, the play is actually about honesty,” Colwell said. “Being honest is already hard on our own, but I think it gets extra complicated when you have somebody else.”

With shows scattered across the Cedar-Riverside and Northeast neighborhoods, Fringe is easily accessible from the University. If you’re concerned about timing and fitting in every show you’d like to see, the Fringe website allows you to build a schedule, enabling you to maximize the potential of a Fringe day pass.

“You can filter by content or genre, whether you really like comedy or drama or dance,” Bentley said.

If you’re still looking for more Fringe recommendations, it can help to turn to your neighbor for suggestions.

“Sometimes by just asking somebody that you walk out of a show with… you get the best word of mouth,” Gallivan said.

Going in without a plan, however, can also be one of the most rewarding ways to spend your days at Fringe. The fun of it all is often in the surprise of what you end up seeing.

“One of the things that’s really nice about Fringe is that it’s messy in a good way,” Sansone said. “You don’t know what you’re going to get… so let yourself see the best and the worst and everything in between.”

LOCATION: Varies based on show