Hofstede decided not to abide by the endorsement and will run full campaign. 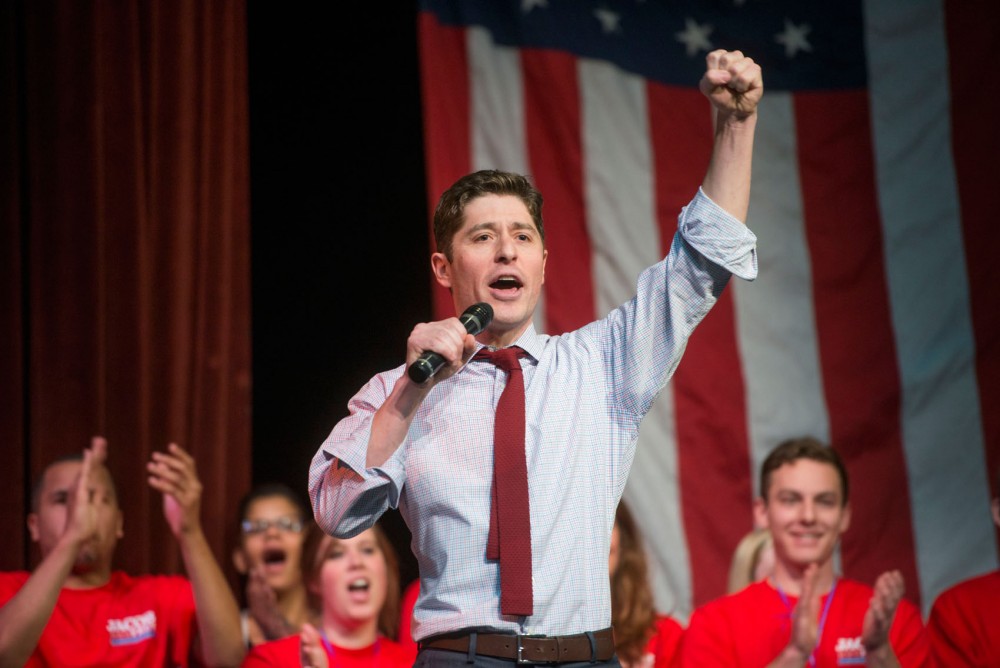 Minneapolis lawyer and city council candidate Jacon Frey speaks after accepting to DFL endorsement Saturday, May 4, 2013, at De La Salle High School. His opponent, Ward 3 incumbent Diane Hofstede, withdrew her name from the endorsement during the convention, but both candidates will continue to campaign for the city council position.

Frey grabbed the 3rd Ward DFL endorsement after incumbent Diane Hofstede withdrew from consideration, citing flaws in the caucus system and vowing to continue her campaign.

Frey, in between hugs from an onslaught of supporters after receiving the party’s backing, said he was thrilled to receive the endorsement to represent the ward consisting of parts of Northeast, downtown and neighborhoods near the University of Minnesota.

“With grass roots organization and including everyone in the process, we not only won but won big,” he said.

In front of a sea of red-shirted Frey supporters at DeLaSalle High School on Nicollet Island, Hofstede said some of her constituents were disrespected and unable to participate fully in the caucuses to elect delegates in mid-April.

“I will take my campaign to the people and let them decide,” Hofstede told the crowd, suggesting the convention goers didn’t accurately reflect the ward as a whole.

She had previously said she’d abide by the endorsement, and her change of heart angered some in attendance.

“She was going to respect the endorsement when she thought she was going to win it,” Frey supporter Christopher Meyer said. “As soon as she realized she wouldn’t, she changed her mind.”

Frey said he was disappointed Hofstede decided to stay in the race but hopes she’ll come around and support his campaign.

A robust campaign of her own is in her sights, however, as Hofstede said the ward has grown under her leadership.

The issues that led to her withdrawal from the endorsement process included alleged mistreatment of East African and older supporters of hers. She said many were kept from participating in the day’s convention.

“There are just too many irregularities with this caucus system,” she said.

Frey supporters questioned the merits of the concerns and said they hadn’t noticed any issues.

State Rep. Phyllis Kahn, DFL-Minneapolis, who supports Hofstede, said she was at various precinct caucuses in April and noticed the problems Hofstede was referring to.

Kahn said large groups of pro-Hofstede Somalis showed up, but surprisingly few of them were on the convention floor Saturday morning.

“None of them ended up being delegates,” she said, indicating that something in the process cut them out.

Though Kahn is a Hofstede supporter, she said she wished the councilwoman would’ve at least waited to withdraw until after the question-and-answer section of the convention.

“I think that would’ve shown what a deeper insight she has into the city,” Kahn said.

Hofstede, who’s been on the council since 2006, is the latest DFL incumbent council member to not receive the party’s backing. Robert Lilligren, Meg Tuthill and Sandy Colvin Roy all left their conventions without the party nod in recent weeks, but none have officially dropped out of their races.

Andrew Johnson, who’s running for City Council in the 12th Ward, attended Saturday’s convention to support Frey. He said Minneapolis residents are upset with council members like Hofstede, Tuthill and Roy, who voted to bypass a public vote to bring in the new Vikings stadium. That decision has fed the wave of opposition against incumbent, pro-stadium council members, he said.

With another three current council members running for mayor, the council will likely have a drastically different look in November.

‘Engaged with the students’

Despite an opponent still gearing up a full campaign to beat him, it was a good day for Frey.

After Hofstede dropped out, he gave an impassioned speech rallying his supporters about the strides the 3rd Ward can take under his watch.

One supporter, matching his passion, yelled “I love you, bro,” to Frey, to which the newly endorsed candidate responded, “I love you right back.”

Johnson said it’s easy to support Frey because of his passionate approach to issues the city faces.

“I’m so excited to see him win,” he said. “He’s going to be a great council member.”

Along with his passion, Frey’s accessibility, willingness to listen and closeness to his supporters have been brought up consistently as reasons people support him.

On caucus day, University students came out in droves to support Frey. Many of them were participating in the early stages of democracy for the first time.

Frey, who has frequently campaigned near the University, has made an effort to engage young people of the ward. Their support carried through into the convention, with large parts of the floor looking decidedly youthful.

Frey supporter Meyer, a former student representative on the University District Alliance, said Hofstede hasn’t had a close connection with students during her two terms.

“Jacob has actually been engaged with the students,” he said, “and Diane has not.”

Frey lauded the work his supporters have done so far, saying he’d been outspent considerably by Hofstede. He said regardless of Hofstede’s intentions, he fully expects to win in November.

“We’ve got a grass roots organization that’s growing every day,” he said.