The Minnesota Daily takes a look inside the University of Minnesota police force's equipment belt. 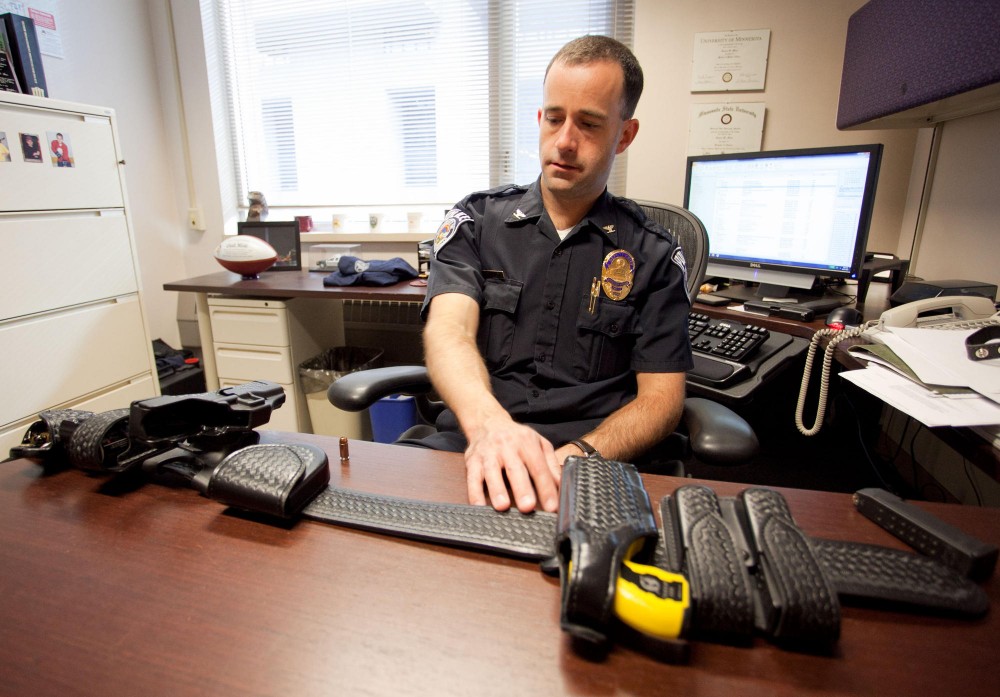 When an officer joins the University of Minnesota police force, they are fitted for a special belt designed to hold everything they might need on the job.

Made of a durable but flexible plastic, the belts can weigh around 15 pounds with all the equipment attached. Each officer has to go through training in order to use some of the items, like the firearm, Taser and chemical spray, which are provided by the University police. The officers are responsible for buying all other equipment, like the extendable baton.

âÄúAll this stuff is about reducing officer injury,âÄù Miner said. âÄúIf a suspect has a knife, we have a gun. WeâÄôre not fighting on a level playing field.âÄù

Officers have space on their belts to carry two extra magazines for their firearms, which means they carry three magazines, or 46 total rounds, at all times.

The University police have been using Tasers for the last five years. Officers must complete a dayâÄôs worth of training to carry a Taser, during which they have the option to be tased. Miner said most officers choose to go through with it.

Getting tased is very painful, Miner said, but once the trigger is released, the pain instantly goes away. Chemical spray, in comparison, keeps burning long after the victim has been sprayed.

There are a few ways to use the stun gun. If an officer is close enough, there are two studs on the front of the Taser to âÄúdry stunâÄù someone by touching their skin, Miner said. Otherwise, the cartridge deploys two probes up to 21 feet that hook into the targetâÄôs skin, delivering the shock. Tasers are not always successful, especially in places like Minnesota, where people are usually wearing multiple layers of clothing. After a Taser is used it must be connected to a computer, which downloads all the information stored in the Taser, including when and how long the trigger was pulled.

To keep track of who is firing the Taser, AFIDs âÄî little balls inscribed with unique identification numbers âÄî are deployed when the Taser is fired. These can then be collected at the scene and be used to determine whose Taser was fired. They are used if Taser use comes up in a court case, Miner said.

The University police carry traditional chain and hinge handcuffs for day-to-day use.

There have been no recent incidents where a University police officer has fired his or her gun, although Miner said they have had to point their guns at suspects âÄúto get their point across.âÄù

Officers must complete a four-hour training to carry the spray. That includes getting sprayed themselves. Miner said in an email that officers sometimes end up feeling some effects when they use the spray, particularly âÄúif it is windy.âÄù The chemical spray is used for self-defense if the officer is unable to subdue a suspect using only his or her hands, he said.

The ring includes keys for the police car, handcuffs and the traffic light control boxes around the University. Officers used to carry keys to access University buildings, but as more and more buildings on campus are card access, thatâÄôs no longer the case.

At about $2,000, these heavy, waterproof radios are one of the most expensive pieces of equipment that University police carry. The battery, which makes up a large portion of the radio, lasts between 10 and 12 hours. The University police use a statewide radio frequency, which Miner called âÄúahead of the curve.âÄù Most other states have separate channels for each police department, which Miner said keeps the departments segregated and makes it hard to communicate. All police departments in Minnesota use the same channel, keeping communication easy and open.

University police carry flashlights that donâÄôt require batteries and charge in one minute. The bright flashlight has multiple settings and is much smaller and brighter than traditional flashlights.

Officers can choose to carry an expandable baton, a Taser or both. The baton is 21 inches long. University police requires four hours of training for officers to carry it. Miner said they come in handy during riot-type situations or when officers need to break glass.