Minnesota trailed 2-0 in sets before Mia Tabberson took over at setter and led a comeback. 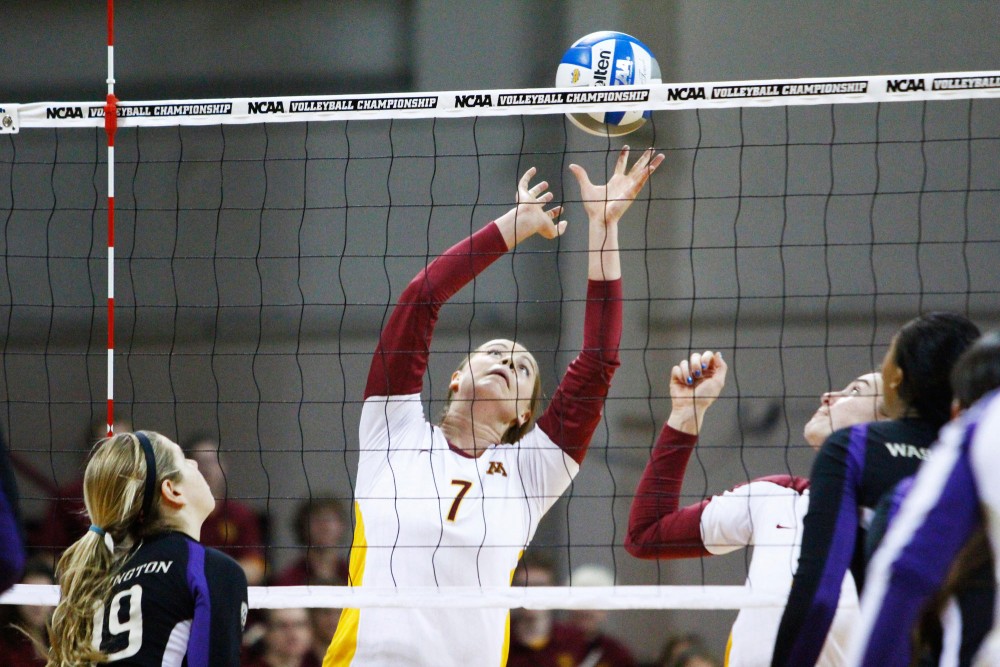 Minnesota setter Mia Tabberson readies the ball for an attack against Washington Saturday at the Sports Pavilion. Minnesota beat Washington in five sets and will advance to the NCAA regionals.

Gophers interim volleyball head coach Laura Bush described the mood as “deathly quiet” in the locker room during the intermission of Saturday’s match at the Sports Pavilion.

It didn’t stay that way for long.

Minnesota (20-11) rallied from two sets down to defeat Washington in the second round of the NCAA tournament to advance to its third consecutive Sweet 16.

Katherine Harms had career-highs in kills (29) and digs (24), Tabberson had 45 assists in three sets, and Ashley Wittman added 23 kills as Minnesota won its fifth consecutive match.

“You could see on everybody’s faces that we weren’t going to let each other down,” Harms said of the team’s comeback. “Everybody just decided, ‘we’re going to win this, we’re going to make sure we come back.'”

“Tabberson came in and she changed the rhythm of the whole match,” Washington coach Jim McLaughlin said.

“Our middles have put up some really great numbers this whole season, so we knew coming in [Washington] would have to defend them,” Tabberson said. “Our middles drove as hard as they could every single time and it held the block. It opened up Ashley and Hailey and Katherine, and they scored all night long.”

McNeil followed that plan too, but missed the target with many of her sets and struggled to get any hitter other than Harms going.

“We thought we’d put the more athletic setter in, the one we thought could slow down [Washington’s] outsides,” Bush said. “But it didn’t matter — they were in system in those first two sets and we weren’t driving our serve. It didn’t matter who was going to be out there as far as the setter who could block the best.”

McNeil, who hadn’t started since Nov. 16, was a strong blocker and floor defender during her time as setter, but struggled to set Minnesota’s middle blockers. Her connection with the outside hitters, however, was usually sharp.

With McNeil setting Saturday, Wittman — the team’s primary outside hitter — had five kills and six errors. With Tabberson at the helm, she found her stride, totaling 18 kills with just four errors.

“Looking at it now, Mia really competed well,” Bush said. “I knew she would. I didn’t know how she was going to handle mentally being out for the first two sets.

“She was, in my mind, a really big hero for us in this match.”

Wittman had six kills in a fifth set in which Minnesota scored 14 of its 15 points on kills.

“I felt like I had it when the fifth set started,” Wittman said. “Our team was fired up. We were ready to go. We don’t come back from two sets down [and] lose that.”

The Gophers’ defense played with energy throughout the match, collecting 95 kills to Washington’s 74. Jessica Granquist tied Harms for the team lead with 24 digs, and Hailey Cowles added 21.

Minnesota will host fourth-seeded Iowa State on Dec. 9 at the Sports Pavilion. The winner advances to the Elite Eight, which the Gophers will also host.