Blake McLaughlin has seven points in the last six games. He didn't net his first goal until his 17th game of the season. 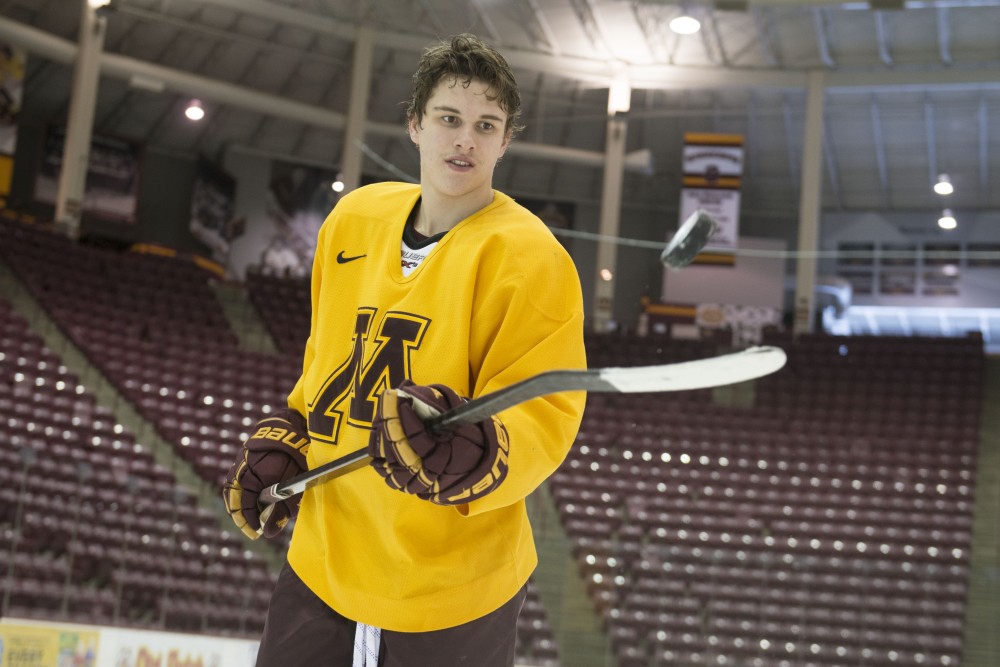 Freshman Blake McLaughlin plays with the puck after practice at 3M Arena at Mariucci on Tuesday, Jan. 29.

Freshman Blake McLaughlin scored 23 goals with the Chicago Steel of the USHL before the Anaheim Ducks drafted him in the third round during the 2018 NHL Entry Draft.

But when he got to the University of Minnesota, he couldn’t get the puck in the net. For 16 games, he started goal-less with the Gophers. But against a ranked Notre Dame team on Jan. 11, McLaughlin scored to put his team up 2-0 in the third period. He has been on fire since then.

“It was really frustrating the first half of the year, just not being able to play my game, and I was always kind of focused on getting the first one to open everything up,” McLaughlin said. “The term in hockey is, ‘kicking the monkey off your back.’ And that’s kind of what it felt like. You just play lighter and quicker.”

McLaughlin has seven points in the last six games, including a game-winning goal with 7.8 seconds left against Notre Dame in the series finale. The Grand Rapids, Minnesota native makes up one-third of the all-freshmen line of forwards with Sammy Walker (18 pts) and Nathan Burke (10 pts).

“His play, though, was very good in the first half,” said head coach Bob Motzko about McLaughlin. “Very aggressive, very confident. He just needed that first one to go in to know that there it is, he can do it. So I love how he plays.”

McLaughlin’s step brother, Jake Bischoff, and stepfather, Grant Bischoff, are Gophers hockey alumni. McLaughlin’s father died from a heart attack when Blake was 10, and Jake Bischoff’s mother died of cancer when Jake was in high school. Then, their parents got married and a giant hockey-playing family of seven siblings was formed. Jordan McLaughlin, Blake’s older sister, is currently a senior forward at Mankato State University.

“We’ve gotten pretty close over the past few years with just him excelling in hockey, and he played in Chicago last year. That’s where I was,” said Jake Bischoff, who is a defenseman with the American Hockey League’s Chicago Wolves, an affiliate of the Las Vegas Golden Knights. “He’s a great kid, hard worker in hockey and school, and sort of everything. He’s a gritty hockey player, and skilled too. It’s pretty fun to watch him, that’s for sure.”

McLaughlin said the family never really talks about hockey at the dinner table, except on Christmas Day, when the whole family plays a game of pond hockey and McLaughlin plays the position he started out as: goalie.

“It’s not what you’d expect. We just like to joke around, we’re more of a card family. We don’t really talk hockey at the house,” McLaughlin said.

McLaughlin is the only Gophers men’s hockey player from the Iron Range of northern Minnesota. Most of the players come from the suburban cities around the metro area. For instance, seven players on the roster are from Edina, a city just southwest of Minneapolis. However, he said he takes pride in being the lone player from the northern part of the state.

“Representing Grand Rapids and the Iron Range, that’s something you take seriously. You don’t want to screw up that reputation. Rapids has been great to me, and hopefully I can be great to them in the future,” said McLaughlin.

He said that Monday-Wednesday practices were all outdoors from when he was in Peewees to Bantams (from about ages 11-15). They would just play 3-on-3 hockey, developing a style of play that he said might be a little bit more gritty from the “city kids.”

Though he was drafted in the third round of the 2018 NHL Draft before this season, McLaughlin said he didn’t dream about the NHL growing up. He dreamed about playing for the Gophers.

“We saw it coming all along, but it’s starting to show up quite a bit. I think he’s starting to get his confidence a little bit, and starting to build his game and transitioning pretty well,” said Gophers captain Tyler Sheehy.