Minnesota opened up its dual season over the weekend with two big wins. 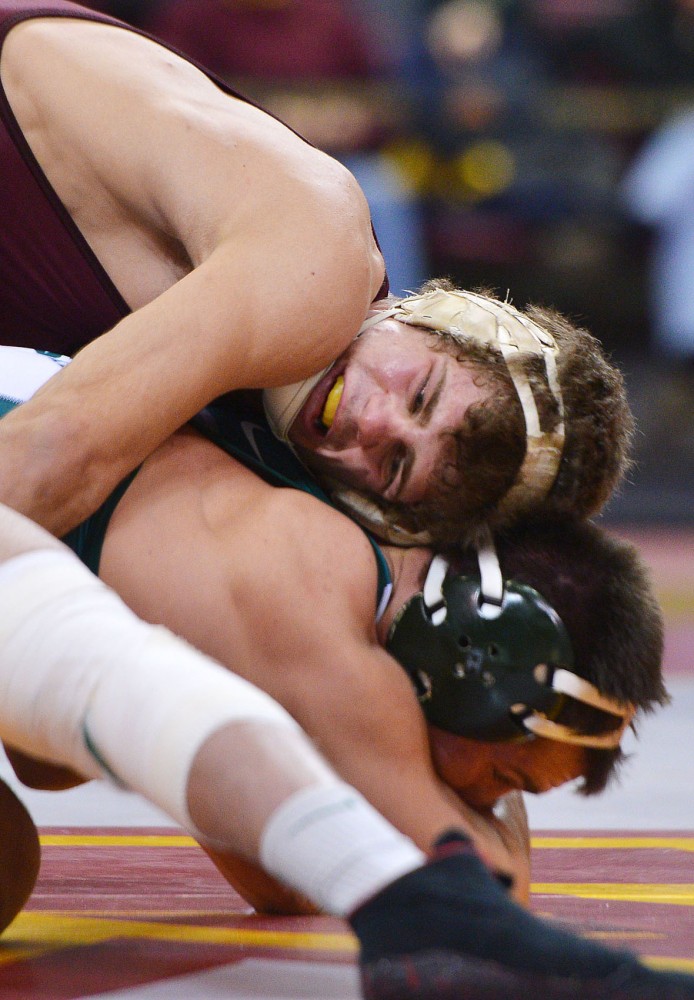 David Thorn, Dylan Ness and Tony Nelson all recorded pins as the No. 2 Gophers dominated Wyoming 41-5 on Sunday at the Sports Pavilion.

The Gophers won nine of 10 matches and improved their dual-meet record to 2-0 on the season. The team hasn’t lost a dual meet since January.

“For us to win national tournaments, we’ve got to score bonus points,” assistant coach Luke Becker said. “And I thought we did a great job of that today.”

Thorn (133 pounds) gave the Gophers a 6-5 lead with a pin in the second match. Minnesota won the next two matches, and then Ness (157) pinned the Cowboys’ Andy McCulley early in the first period, and the Gophers took a 19-5 lead going into halftime.

Nelson, the No. 1 heavyweight in the nation, pinned Wyoming’s Leland Pfeifer at 2:28.

Ness has recorded pins in the Gophers’ first two dual meets. He trailed 4-0 after a period Friday against Purdue before recording the pin in the final minute.

Redshirt freshmen Brett Pfarr (184) and Sam Brancale (125) wrestled in the second dual meet of their Gophers careers. Pfarr won on a 10-1 major decision, and Brancale lost on a technical fall.

Becker appeared pleased with both wrestlers’ performances after the meet, but he said Brancale has to work on controlling his weight and body positions.

He said redshirt senior All-American Kevin Steinhaus will take over for Pfarr at 184 when he’s fully recovered from an anterior cruciate ligament injury.

Pfarr said he was initially a little nervous Sunday but gained confidence when he took a 4-0 lead in the first period. He said he’s enjoying the opportunity to be part of the starting lineup while he can.

The Gophers wrestle against No. 14 Oregon State on Friday in Corvallis, Ore.

The Gophers defeated No. 20 Purdue 35-3 on Friday at the Sports Pavilion, thanks in part to Ness’ first pin of the weekend.

The pin gave Minnesota a 16-3 lead going into halftime.

Minnesota won all five matches after Ness’ pin and won nine of 10 matches in total.

Pfarr and Brancale saw their first dual-meet action. Pfarr won a 12-2 major decision, and Brancale lost 5-2 in the opening match.

Thorn followed up Brancale’s loss with a 15-5 major decision in the second match, and the Gophers led the rest of the dual.