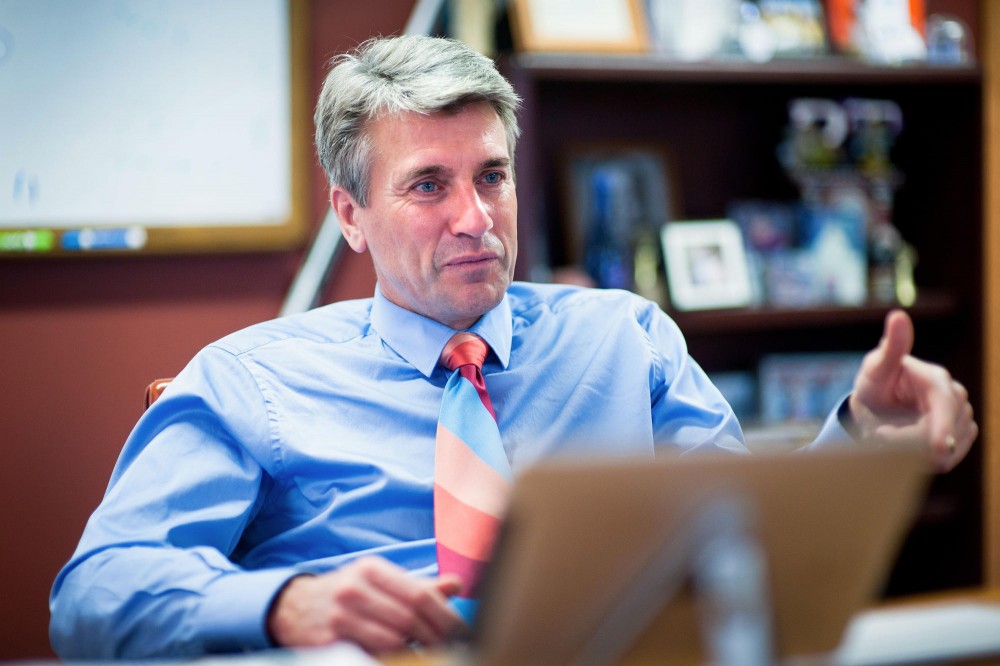 Minneapolis Mayor R.T. Rybak talks about his involvement at the University Thursday in his office at City Hall in Downtown Minneapolis. Rybak was first elected to the mayor's office in 2001.

After a decade representing the city, Mayor R.T. Rybak sits perfectly at ease in his office in Minneapolis City Hall.

As the leading man of Minneapolis, Rybak knows the University of MinnesotaâÄôs importance to his city. The campus was integral to his successful election in 2001, he said.

âÄúThe University was one of the first places where I got a foothold of support,âÄù Rybak said. âÄúI spent a lot of time at the University.âÄù

But in the latest citywide election in 2009, wards 2 and 3 âÄî those that encompass the University and its surrounding neighborhoods âÄî tied with another ward for the lowest voter turnout at 14 percent.

In an informal Minnesota Daily survey conducted on campus, 16 of 50 University students said they knew who Rybak was. ThatâÄôs more than five times higher than the name recognition of City Council members Cam Gordon and Diane Hofstede, but still only 32 percent.

Rybak said he tries to engage students by holding office hours, visiting classes and speaking with student groups. He hopes to increase student participation in city boards and commissions, which currently have limited student involvement.

Rybak said the University campus is âÄúwhere I go when I want to bounce new ideas off of people.âÄù

Raymond Thomas Rybak, Jr. grew up in Minneapolis. Named for his father, the family shortened his name to R.T. before he made it to grade school.

He had to stand up in front of his first-grade class and ask his teacher to call him by his initials. The class laughed.

Year after year, he overcame his shyness as he repeated the request.

âÄúI got pretty used to standing up in front of people,âÄù he said. âÄúI think itâÄôs one of the reasons why I can do what I do.âÄù

By the time he was 13, he was confident enough to set a lofty political goal: One day heâÄôd be mayor.

Rybak graduated from Boston College in 1978 with majors in both political science and communications. After returning to Minneapolis, he worked as a reporter for the Star Tribune for eight years.

He also opened up his own marketing company and worked as a consultant. One of his clients was Minnesota Public Radio.

At the beginning of his 2001 mayoral bid, Rybak found his campaign tactics failing.

âÄúI had to door knock a lot,âÄù he said. âÄúOriginally IâÄôd walk up and the door would open, and IâÄôd launch into some speech. Very often the door would close.âÄù

Rybak changed strategies mid-campaign and reverted to his reporter instincts, he said. He began asking questions about what problems constituents saw in the city.

âÄúAfter a few months, I could do a good job talking about the needs of the city because IâÄôd been doing a lot of listening,âÄù Rybak said.

In 2009, Rybak squared off against John Kolstad, who in a recent interview said that Rybak should push harder for green initiatives instead of spending money on stadiums.

However, Kolstad stressed that he likes the mayor personally.

âÄúI have a lot of respect for his ability to communicate and stay in a positive mode,âÄù Kolstad said. âÄúMy objection is that I donâÄôt think heâÄôs led the city in the direction it needs to go.âÄù

Peter Erkkila, vice president of the College Democrats at the University of Minnesota, said the mayor has been accessible to students. Erkkila supported Rybak in his unsuccessful 2010 gubernatorial campaign.

Rybak last visited the group during his re-election campaign in 2009. The mayor ate pizza with students and stayed afterward to chat.

âÄúStudents get really excited about him,âÄù Erkkila said. Several students have worked in the mayorâÄôs office in the past, he added.

He said that talking with students is refreshing. Younger audiences see connections between the war, the economy and the environment that older generations may not, Rybak said.

âÄúIâÄôd get on campuses, and that was all tied together. Like me, the students always saw that as one issue.âÄù

Rybak said his main focus in influencing the University is through the local high schools.

One of his priorities is the Minneapolis Promise,  a program with three initiatives: privately funded career centers at every Minneapolis high school, the Step Up Summer Jobs Program and college tuition aid at either Minneapolis Community and Technical College or the University of Minnesota.

Rybak said 14,000 students have been through the Minneapolis Promise program âÄî 80 percent are students of color.

University graduate Kafia Ahmed was one of the Step Up program interns in 2006. Ahmed was at Roosevelt High School at the time and worked in RybakâÄôs office through the program.

She said her experience with the program âÄî and with Rybak âÄî solidified her desire to pursue a career in politics. Ahmed finished her double major in political science and global studies in May.

She has sustained her relationship with the mayor for the past five years since her internship, she said. The two met up on Friday.

Rybak hasnâÄôt yet decided if heâÄôll run for mayor again in 2013, but heâÄôs sure heâÄôll enjoy the job for the remainder of his term.