Land Grant 150th: a time to learn the U’s history

Anniversary brings together alumni, students and faculty in recognition of the Morrill Act and the University's beginnings. 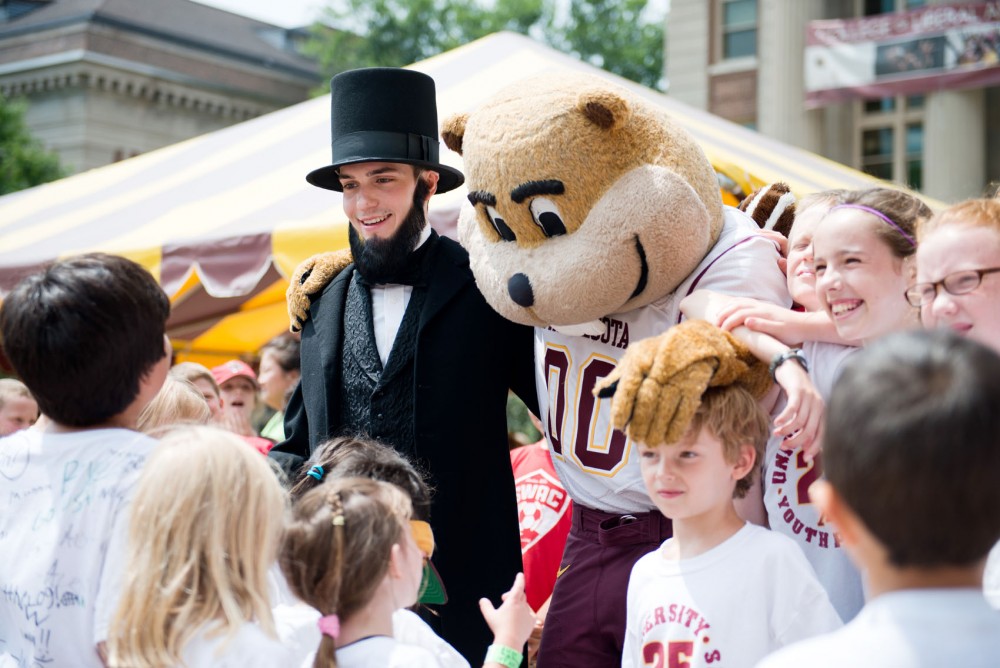 A costumed Abraham Lincoln and Goldy Gopher pose for photos during Land Grant Sesquicentennial Day on Friday on Northrop Plaza.

During the Civil War, an act geared to expand higher education was signed into federal law.

On Friday, a celebration of the 150-year anniversary of the Morrill Act evoked reflections of the University of Minnesota’s history from students, faculty and alumni.

The Morrill Act provided funding for land to build universities meant to educate the less privileged in areas such as agriculture, military science and engineering.

University historian Ann Pflaum called the act “one of the most innovative policies of American higher education.”

Acknowledging it as the only land-grant university in the state, Gov. Mark Dayton proclaimed Friday to be “University of Minnesota Land Grant Sesquicentennial Day.”

Though Dayton did not attend the celebration Friday, the Abraham Lincoln actor read Dayton’s proclamation at the event.

His speech made the point that since its earliest days, the University has built a legacy of discovery, research and collaboration that has “improved the lives of Minnesotans.”

The great-grandnephew of Justin Morrill — the former Minnesota senator who sponsored the Morrill Act before it was signed — attended the celebration and said the University has made great efforts to improve the community.

“When [the University] does its research in agriculture, it is not necessarily trying to find a solution so they can make money off of it,” Prescott Morrill,  said.

Allen Levine, dean of the College of Food, Agricultural and Natural Resource Sciences, said the Morrill Act contributes to the world’s productivity in agriculture and food production.

Now, Levine said, the University is working to produce food that will protect soil and water supplies and create wheat varieties that will withstand a disease, UG99, which has been infecting crops internationally since 1999.

“People worry that it will start killing more wheat around the world,” Levine said.

He explained agricultural research at the University remains important because it allows students to learn how to produce food and fuel and keep people alive.

“You never stop searching for the diseases,” Levine said.

The proclamation also discussed how students benefit from the University’s mission of discovery.

Ayla Benjamin, a public relations senior, said the Morrill Act isn’t something a lot of students are aware of, but is interesting for those who want to learn how the University started.

“Being a liberal arts student, [the Morrill Act] really has opened the door for having an education available,” Benjamin said.

“Those things have expanded to many more diverse fields but there is still a basis in research,” Morrill said.

He said research reminds him of the importance of public education and how it has been important to his family for many years.

“It probably is, was and continues to be instrumental in the education of a whole lot people that wouldn’t have otherwise had access,” Morrill said.