Three turnovers proved to be too much to overcome in 24-14 loss. 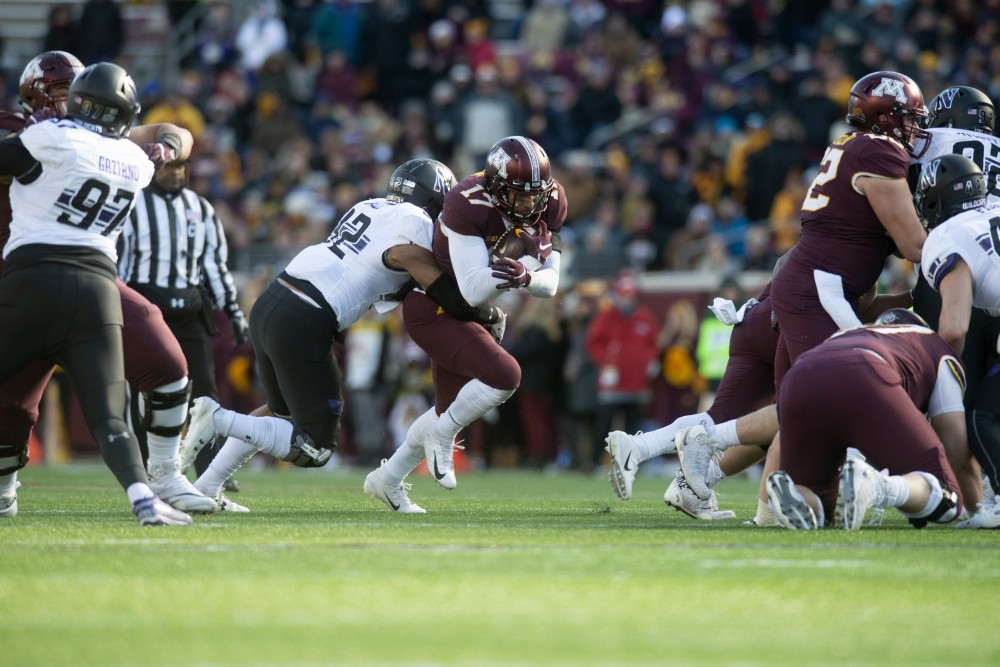 Wide receiver Seth Green fights through a tackle during the game against Northwestern on Saturday, Nov. 17 at TCF Bank Stadium.

Coming into Saturday, the Gophers had averaged 28 points per game in Big Ten play. Against Northwestern, however, they could only muster 14.

Northwestern (7-4, 7-1) controlled the ball on the ground and added a few big plays when needed to secure the 24-14 win over the Gophers (5-6, 2-6). Running back Isaiah Bowser totaled 85 yards on 29 carries and punched in two touchdowns.

The Gophers defense played well for most of the day, allowing 325 yards of offense and 4-13 on 3rd down conversions, but turnovers by the offense and four big plays were too much to overcome.

“[Northwestern] doesn’t give you anything, they make you play a perfect game and we weren’t capable of playing a perfect game,” said head coach P.J. Fleck. “When you have three turnovers against Northwestern, you’re going to lose the football game.”

With the game tied 7-7 and 2:18 left in the first half, Minnesota kicked off following a Mohamed Ibrahim touchdown, and wide receiver Kyric McGowan returned it 39 yards to the Northwestern 45. It took Northwestern three plays and 1:06 to score from there, with completions of 23 and 19 yards followed by a 13-yard touchdown run from quarterback Clayton Thorson. The score put the Wildcats up 13-7 going into halftime, taking the air out of the Gophers sails from the previous possession.

In the 4th quarter, with the score still 13-7, Thorson connected with JJ Jefferson on a 68-yard pass, setting up the Wildcats at the Gopher two-yard line. Bowser finished it off on the next play to extend the Northwestern lead to 21-7.

“I gotta play better, 100 percent, no question about it,” Morgan said. “We made too many mistakes today.”

Morgan was sacked four times and coughed up a fumble late in the game that secured a win for Northwestern.

Mohamed Ibrahim ran for 98 yards and a touchdown. Ibrahim has 815 rushing yards on the season, which ranks third most all time for a freshman running back.

Tyler Johnson continued his strong play, catching eight passes for 88 yards and a touchdown. Johnson now has 70 catches this year, which ranks third most at Minnesota all-time. He also surpassed the 1,000-yard mark for the season. Johnson needs 90 yards against Wisconsin to break Ron Johnson’s single season record of 1,125 yards.

“I think he has become a complete wide receiver, a go-to guy, the main attraction. We call him the bell cow, and you need a bell cow,” Fleck said.

Blake Cashman finished with 20 total tackles, one sack and one pass breakup. It is the most tackles by a Gopher since they moved to TCF Bank Stadium.

“We’re going to miss that young man one day,” Fleck said regarding Cashman. “I wish I had 130 of Blake Cashman, because he is exactly what college football is all about, what it should be about.”

The Gophers take on Wisconsin next week in their final game of the year. With a win the Gophers would reclaim ‘The Axe’ for the first time in 15 years and become bowl-eligible.

“It’s something we haven’t done here in a very long time … I can’t even remember the Gophers ever having [the axe], I was so young,” said Cashman, a Minnesota native. “It would be a thrill to come back to campus and see all our fans and students very excited. That will be an experience and a moment that we will get to share with them.”