Capturing the past: U-art profs retire with co-exhibit

Drawing and painting professor Joyce Lyon and photography professor James Henkel are combining their works at the Regis Center for Art. 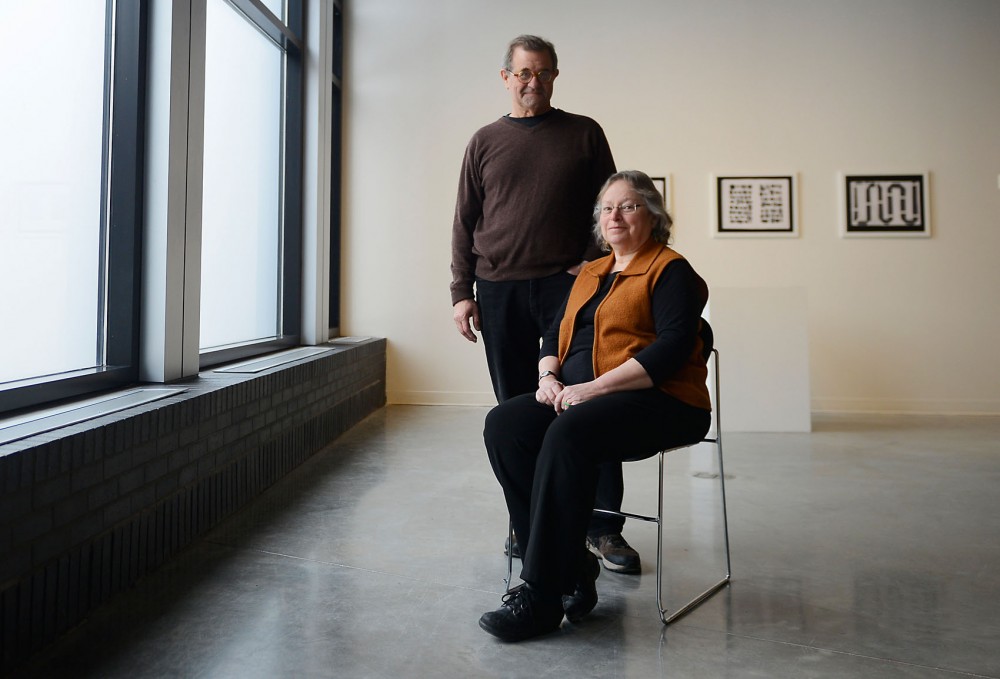 James Henkel, left, and Joyce Lyon pose together inside their exhibit entitled "The Longest Way Round is the Shortest Way Home" at the Nash Gallery in the Regis Center for Arts on Friday afternoon. The exhibit celebrating the work and careers of the two University professors premieres today, and is open from 11:00AM to 7:00PM.

James Henkel, a University of Minnesota art professor, contorted old projection slides for a piece that represents how people communicated in the past.

For the artistic work, he photographed the slides — which he found through a University-led reuse program — and arranged the pictures in a series so that they grow more complex and indecipherable in shape.

“Toward the end, they become chaos — this is the way students hear [sometimes],” Henkel said.

And now Henkel’s idea is featured at the Regis Center for Art as part of the exhibit “The Longest Way Round is the Shortest Way Home.” The showing is a retrospective collection that’s inspired by both his and fellow art professor Joyce Lyon’s careers as they near retirement.

Though Lyon’s and Henkel’s catalogues are unrelated, the two professors decided to combine their works to celebrate their experiences at the University, where each has been since the ‘70s.

As an art photographer, Henkel said he values the art department’s resources.

“It’s probably the only job you can have that could give the time, space and resources to continue that kind of work,” Henkel said of the University’s research-oriented approach to his craft.

Henkel’s experiences in education, like working with students with disabilities, influence the exhibit,

For another series, Henkel sawed apart books and glued different pieces together. In the same set, he covered some equations in a math textbook with mud, rendering it illegible.

“[The formulas are] no longer a challenge. The text is completely covered up,” Henkel said. “The book is this incredible symbol, tool [and] metaphor for knowledge.”

Like Henkel, Lyon said the works featured in the recent exhibit — some dating back 30 years — have the same emotional significance as when she created them.

She said many of her drawings and paintings hang in banks and corporate offices.

“They’re living in much more formal settings, and the interactions people have with them [are] different,” Lyon said.

For Lyon, who interprets natural landscapes into her window-sized illustrations, work begins with a photograph of a scene she wants to draw.

Lyon attempted to paint a portrait of her backyard at night in one piece that’s in the exhibition, but she was left filling in certain blanks of what she couldn’t see in the original photograph.

“What I had invented was sort of like daylilies,” Lyon said of interpreting an unidentifiable plant in the photo. “In fact, what were growing there were daylilies — the photograph didn’t say, but I knew from a different place.”

While Lyon and Henkel said there isn’t a direct force behind their art’s inspiration, they find influence throughout the art department’s community.

“We’re composites of all of our experiences, especially in the arts,” Henkel said of teaching.

Though both are ending their time as professors, Lyon said education inspires her perspective on art.

“Knowing what you want to come next — that’s part of the growth,” Lyon said. “There isn’t a metric. If you take the subjectivity out of any kind of creative endeavor, then you take the heart out of it as well.”

What: “The Longest Way Round is the Shortest Way Home”