Riverton’s plan would demolish one of its current properties to make room for a new one. 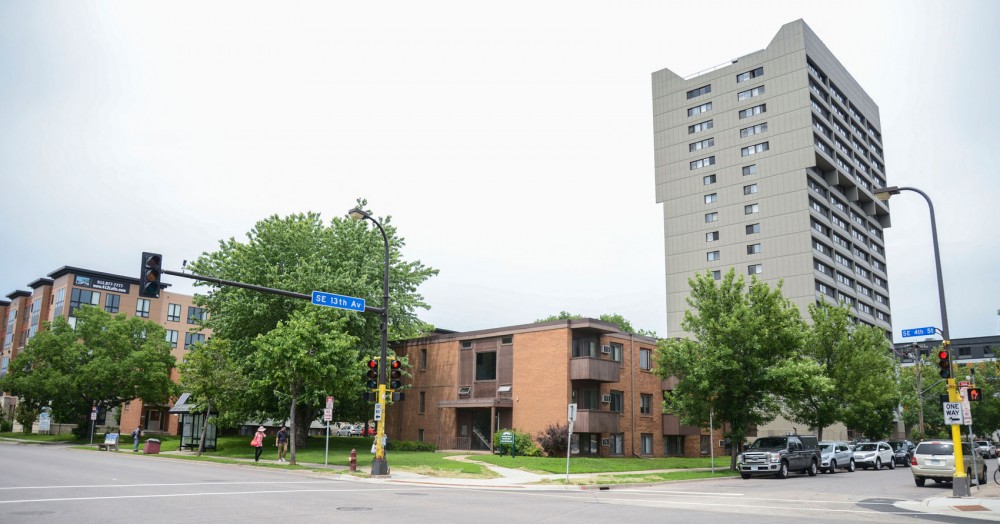 Riverton proposed a new development on the northwest corner of 4th street and 13th avenue.

As much campus-area development continues with luxury student housing, one developer is looking to expand its model of community over amenities.

Riverton Community Housing, which owns six properties near the University of Minnesota, is looking to build a new six-story, 66-unit apartment complex at the corner of 13th Avenue Southeast and Fourth Street Southeast, across the road from the Library Bar.

Riverton already owns the property where it plans to build the new apartment. It plans to demolish one of its existing complexes sitting on that land, the Fourth Street Housing Co-op, to make way for a new building.

And because area land prices are high, Ellis said the upcoming Fourth Street Southeast project is an opportunity to boost the number of units available to students on a property already owned by Riverton.

Lukah Wesloh lives at the Riverton-owned Chateau Cooperative in Dinkytown, which he said he chose for its affordability.

“They don’t pretend to offer any frills, but it’s a much better price,” he said. “I get my own room for half the price.”

Marcy-Holmes Neighborhood Association President Cordelia Pierson said the neighborhood is looking to diversify its housing, which in recent years has been dominated by new, high-end student apartments.

“I think the co-op model works well here,” she said.

In addition to more affordable housing, Pierson said she thinks Marcy-Holmes would benefit from new development catered not necessarily to students, but also to families and University alumni.

And as the Dinkytown commercial area expands, Pierson said, its core should be reserved for small, “eclectic” businesses and
supplemented by larger businesses on its outskirts, where foot traffic is currently lacking.

Initial plans for Riverton’s proposed cooperative building didn’t include any commercial space, Pierson said. But after input from the Marcy-Holmes Neighborhood Association, more than 2,300 square feet of retail space was added.

Pierson said commercial space in the proposed development could attract larger tenants and larger crowds of customers to the neighborhood.

At a Marcy-Holmes Neighborhood Association Land Use Committee meeting June 10, committee members pushed Riverton again to extend the commercial space along the side of the building facing 13th Avenue Southeast.

Ellis said Riverton wants to keep the project focused on residential space rather than commercial space, but he thinks the retail space currently planned “will be good for the neighborhood,” he said.

Computer science and engineering graduate student Ankush Khandelwal said he decided to move to the Chateau Co-op because he had a friend living there and stayed for its low rent.

In addition to its affordability, Khandewal said he’s drawn to the community aspect of the co-op.

When he was a member of the cooperative’s board, he said he was able to help make important decisions about what happened in the building, like prioritizing its improvements projects and organizing community activities.

“You don’t get anything cheaper than that,” he said.